Recently, HUD has allowed certain variances to be deemed immaterial when it comes to reconciling variances between HUD systems. One of the variance problems has been the Voucher Management System (VMS) RNP vs. Financial Data Schedule (FDS) RNP. Typically the FDS would be rejected if there was significant variance as comparted to the FDS. For 3/31 year-ends and going forward, follow the guidance listed below to avoid any unnecessary rejections from REAC.

The concept of Restricted Net Position has been around for approximately fifteen years and calculating this balance continues to cause problems for Public Housing Authorities (PHAs) across the country. We have to stop and ask ourselves why this is happening. The short answer is that there is conflicting guidance from different departments of HUD regarding how to calculate and report this number. This is the root source of the confusion. To understand how this all works and what can be done to resolve, let’s dive into the details.

What’s in a name?

There have been and continues to be many different names for the same calculated number. On the VMS, it was called “Net Restricted Assets”. This was later changed (in 2013) to be “Restricted Net Position” to comply with GASB 63 account naming.

The FDS used to report it as “Restricted Net Assets” and followed suit to “Restricted Net Position”. However, on the details links for calculating this value, it is also called “HAP Equity”. This gives PHAs five potential names for the same figure. For those newer to the industry, it can be very confusing to discern if these are different balances as all five names are frequently used interchangeably.

How do I calculate RNP?

The formula for calculation of Restricted Net Position is mostly the same in the VMS Guidebook and the F. The amount of HAP income plus restricted fraud repayment income, FSS forfeitures, and interest up to $500 make up the total income. The HAP expenses paid to landlords and typically half of bad debt expense makes up the total expenses. The net of these income and expense items is the change in Restricted Net Position which is added to the beginning RNP to get the current RNP.

Which calculation is correct?

First, there needs to be a number to rely on when HUD calculates how much HAP to fund PHAs and secondly, there currently needs to be an agreement between RNP on the FDS and VMS to get the REAC submissions accepted. If these values do not agree the submission is rejected with the following error message “The total NRA (Net Restricted Assets) per the VMS is $XXX,XXX while the amount on FDS line 511.4 and Line 11180 is $YYY,YYY.”

How does this calculation impact funding?

One thing that is clear and certain amidst all this murkiness, is that the number that is used to determine PHA funding comes from the VMS. The amount of HAP expense reported in prior months determines how much HAP income will be disbursed to the PHA as part of the HCV Cash Management rules. The RNP becomes a major factor in funding when the following trends occur.

The first trend will result in RNP accumulation and a reduction in funding so that the PHA can use the reported RNP prior to receiving new funds. The latter trend of needing more funds than available tends to be more common and PHAs in this situation are then required to ask for HUD Held Reserves, front load funding or shortfall funding. In either situation HUD will need to see how much existing RNP is at the PHA to cover HAP.

According to the VMS guidelines, the PHA is allowed to report negative RNP. In the instances where the PHA is spending more on HAP than receiving, the RNP on VMS would show that with a negative number to support the request for additional funds. This is a key difference from how the FDS reporting handles this situation.

The FDS does not allow negative RNP and requires the booking of a receivable to show that future HAP funds will be provided to cover this difference. Or, it requires a transfer be done to show an influx of funds to RNP to bring it to zero. This change will often cause a substantial difference between the VMS and FDS RNP balances. At the time of the unaudited or audited submission, adjustments like this and the previously mentioned differences lead to the error message regarding VMS and FDS not agreeing.

What’s the solution to this?

There are many different approaches to getting past this error message and getting the submissions accepted. If the difference is not that substantial and there is an experienced REAC reviewer that knows the FDS and VMS have different RNP guidelines, they may accept the submission despite the difference. Other times a REAC reviewer will reject if because it’s off a very small amount.

One thing that has become a common practice that is not recommended is to make a blanket adjustment to the VMS to agree to the FDS calculation. This will get your REAC submission accepted but almost always causes different problems in the long run.

If the PHA needs HUD Held Reserves or shortfall funding, undergoes a QAD review, or receives a Two-Year-Tool calculation of RNP, that blanket adjustment will cause the RNP calculated by HUD to be different than the VMS. This leads to delays in receiving funds the PHA needs to cover HAP expenses.

Other somewhat common suggestions have been to make adjustments on the general ledger and FDS in order to conform to VMS reporting. Recording things such as fraud income on a cash basis to match VMS and no longer need Bad Debt Expenses could resolve those differences, but it could also cause problems during the audit as that is not in accordance with GAAP. Another suggestion has been to report the HAP expenses on the VMS based on the general ledger activity. While this will help remove a source of differences, it is technically not compliant with the VMS guidelines.

The best answer to this issue has been to report the RNP in VMS correctly according to VMS guidelines and to report the RNP in FDS according to GAAP. The differences can be resolved with a reconciliation schedule as an attachment. This may require some initial data digging but once it is established should not be too burdensome going forward. A sample schedule will be as follows: 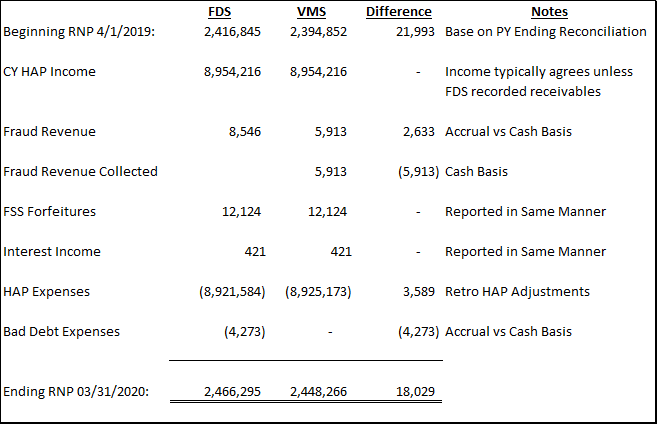 Rethinking Your Payables Process: The Key to Enhancing Your Accounting Department

Rethinking Your Payables Process: The Key to Enhancing Your Accounting Department

The payables process at your Public Housing Authority can be overwhelming considering the amount checks being processed each year. Rethinking your payables process and following the below steps can set your organization up for success.

Use of Tenant Participation Funds

Use of Tenant Participation Funds

70,000 Emergency Housing Vouchers (EHVs) have been issued to PHAs pursuant to funding that was included in the American Rescue Plan of 2021.