Restaurant same-store sales were flat in 2017, posting no change over 2016.  The year was marked by continued change in consumer preferences, but positive economic indicators and improved consumer confidence failed to convert to more comparable sales for restaurateurs.

While restaurant owners invested heavily in technology, delivery partnerships, new concepts, menu upgrades, and experience, it did not encourage the majority of consumers to significantly increase their check size or frequency of dining out.

Pizza outperformed all other restaurant sectors analyzed, pulling in a 2.9 percent increase through Q4. However, growth was slower than the 4.6 percent increase in 2016 overall. Domino’s remains the top performer at +8.7 percent for 2017. With its newly minted NFL partnership, Domino’s is poised to further increase marketing and advertising in 2018 and continue to capitalize on its sector-leading technology investments.

Quick serve posted a modest 0.8 percent increase through Q4 2017. The category was led by Carrols Restaurant Group (+5.2 percent), Taco Bell (+4.0 percent), and McDonald’s (+3.6 percent). Taco Bell has continued to focus on menu innovation, and its moves in early 2018 show promise for the year ahead. Taco Bell’s introduction of nacho fries in January was its most successful product launch in history, and the item appeared in one-in-three orders in the first two months after launch, according to Yum Brands. In the spring of 2018, Taco Bell also added new items to its value menu, borrowing a tactic from McDonald’s. McDonald’s reported its best same-store sales in six years in Q4, and while it may stretch profitability, the company is optimistic that its Dollar Menu, new menu items and investment in delivery will continue to boost sales in the year ahead.

Upscale casual and casual reported flat results for the year at -0.1 percent and 0.0 percent, respectively. Texas Roadhouse was the top performer in the casual category, reporting a 4.5 percent increase for the year, while Applebee’s (-5.3 percent) continued to struggle. Among upscale casual brands, Eddie V’s led the category with a 4.3 percent gain through Q4, while Sullivan’s Steakhouse had a tough year, leading to a 6.3 percent decline in same-store sales for the year.

Fast casual had the most challenging year overall, posting -1.6 percent for 2017. Despite a slow Q3 and Q4, Chipotle was the top performing brand in the category with a 6.4 percent sales increase for the year. Being in the green is a stark contrast to Chipotle’s -20.4 percent year in 2016. While analysts suggest the brand is still rebuilding trust following its food safety issues, there is optimism for the company’s direction under new CEO Brian Niccol, Taco Bell’s former chief. On the other hand, Taco Cabana (-7.3 percent) and Pollo Tropical (-6.5 percent) were not able to secure such a turnaround, reporting deeper declines in 2017 vs. 2016.

Cost of sales reached 29.0 percent for 2017, a slight uptick from 28.8 percent in 2016. Each segment saw modest increases through Q4 2017, except for the casual category where cost of sales was flat.

Commodity prices continue to be challenging to predict. Through the end of Q4, egg prices increased 15.1 percent, though it’s worth noting that egg costs declined by 51 percent in 2016, so those increases came on top of subdued prices. Other commodities fluctuated throughout the year, with fresh vegetables increasing by 6.5 percent overall and pork increasing by 3.2 percent through Q4. Cheese prices declined by 5.3 percent for the year, providing additional lift to the pizza segment. Beef prices ended the year down 0.3 percent, compared to -16.7 percent in 2016. 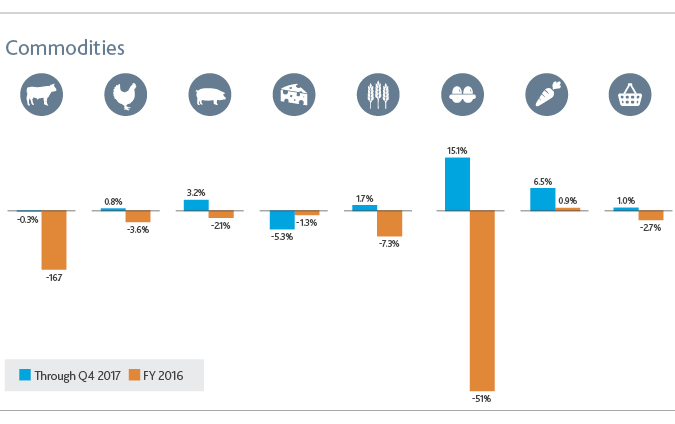 Labor costs also rose slightly through Q4 2017, posting a 0.7 percentage point increase over 2016. High turnover and increasing costs continue to challenge the restaurant industry, where lukewarm sales results mean that each piece of the profitability puzzle must be scrutinized. As conversations over increasing the minimum wage continue in many states, the March 2018 omnibus spending bill brought the question over tip pooling policies to a close. Our recent Selections blog post covers the new guidance, which prohibits employers from keeping tips for any purposes and offers guidance on when tip pooling is permissible.

Restaurants remain focused on reinvention to meet new consumer needs and battle competition. We expect concepts will focus on high-quality ingredients, convenience, delivery, and to-go meals this year, but there is one key question lingering: how will tax reform impact restaurant owners?

While each new tax provision must be considered, and there will likely be both positive and negative implications for restaurant owners, analysts have been bullish for the impact on sales. In fact, Restaurant Research predicts that the tax cuts for individuals could contribute to a 1 percent increase in 2018 same-store sales.

Earnings reports will soon begin to reflect tax reform’s impact on restaurant profitability overall, and early results bode well. Darden expects tax reform will save the company $70 million, and McDonald’s reports that it will invest an additional $150 million in its education benefits program, thanks to savings from tax reform.
However, BDO recently surveyed 1,000 consumers to gauge the impact of tax reform on their bottom lines, and only 30 percent say they have noticed a positive change in their take-home pay. This suggests that most consumers may not be feeling a significant difference in their disposable income that would spark them to spend more in restaurants. On the other hand, 60 percent say they are likely to spend increased take-home pay on food, which would include grocery and restaurant purchases.

With more positive forces than negative headwinds, 2018 could be a stronger year for restaurants that make the right investments to get their consumers in the door…or on the app. 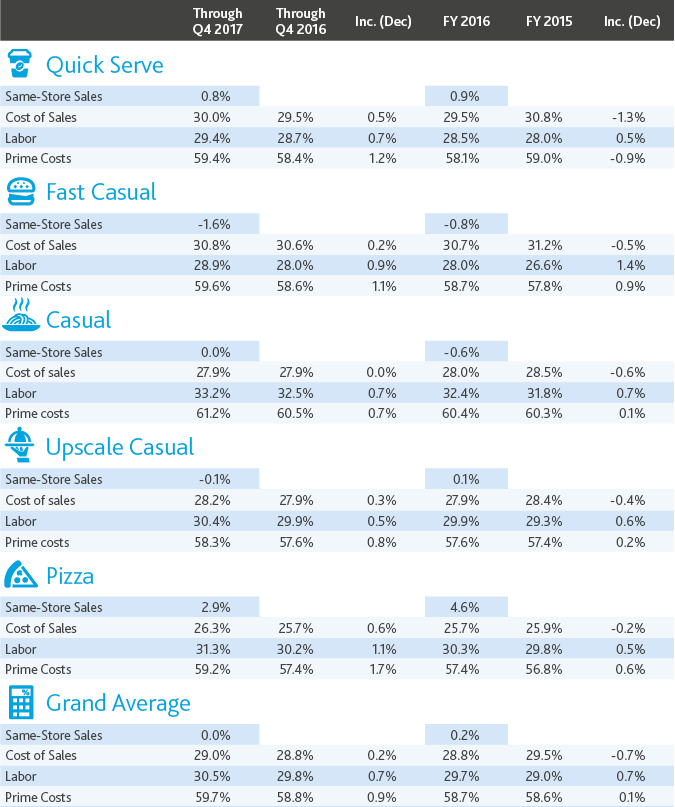