The 2017 BDO Manufacturing RiskFactor Report examines the risk factors in the most recent 10-K filings of the largest 100 publicly traded U.S. manufacturers in the food manufacturing, transportation, fabricated metals, machinery, plastics and rubber segments; the risks are analyzed and ranked by order of frequency cited.

Ready or not, the next generation of manufacturing has arrived. Manufacturers are up against coalescing forces of technological disruption, economic uncertainty, globalization and trade upheaval—all of which will shape the manufacturing industry of tomorrow. Today, that means a wide array of business risks to identify, evaluate and build into business strategy.

But there’s also ample reason to believe 2017 is primed for a manufacturing renaissance. The Institute for Supply Management’s Manufacturing Index inched up to 54.9 in May, beating estimates and indicating the manufacturing economy grew for the 96th consecutive month. New orders, employment and inventories reflect stability, and coupled with the installation of a new administration vocally committed to boosting U.S. manufacturing competitiveness, momentum seems to be building.

“While manufacturing companies are riding a wave of optimism propelled by the Trump administration’s stated focus on regulatory reprieve, the feasibility and speed of potential reform is still murky. There’s hope in the industry that a solid level of balance will be reinstated between the greater good some regulations seek and the high costs of compliance.” 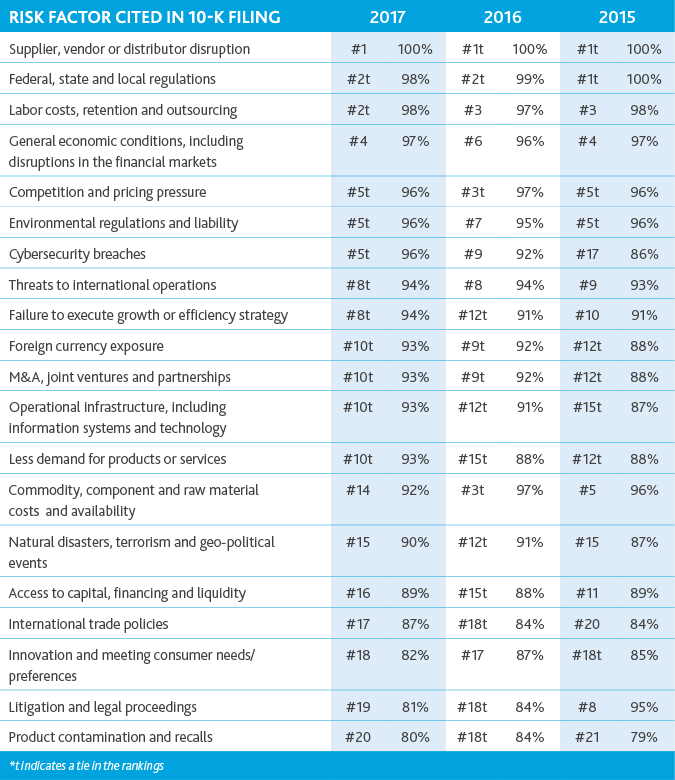 2016 was undoubtedly a mercurial year in politics. One in 5 manufacturers mention the 2016 U.S. general election and changes associated with the installation of the new administration in their filings. As businesses wait to see how campaign rhetoric will play out in enacted policies, manufacturers seem to be feeling uncertainty around economic priorities and spending. The United Kingdom’s Brexit vote in June also spurred global shockwaves. As negotiations continue, global manufacturers could face disruptions to their European supply chains. 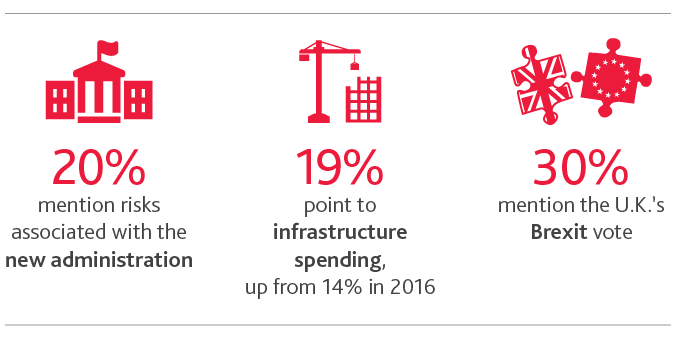 While it’s too early to tell the full scope of changes to come, regulatory easing was a major theme throughout the Trump campaign. One key promise was repealing the Dodd-Frank Wall Street Reform and Consumer Protection Act. In early May, the House Financial Services Committee voted to send the Financial CHOICE Act—which would roll back significant pieces of Dodd-Frank—to the House floor, where the bill passed in early June. Its fate in the Senate, however, remains unclear. 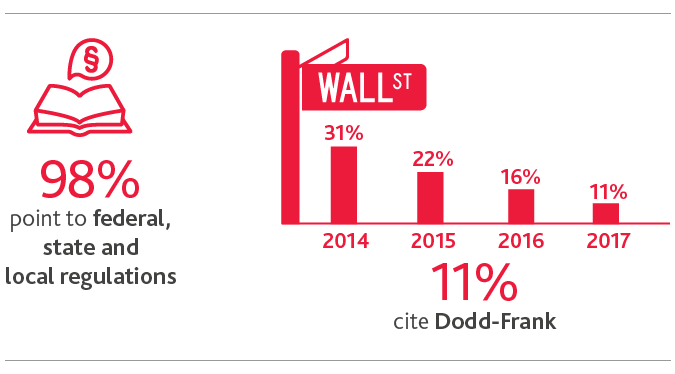 Challenges and regulations related to the environment are also a consistent thorn in manufacturers’ sides. More than a third say the effects of climate change are a threat to their business, but regulatory standards aimed at addressing those concerns bring their share of challenges.

Staffing the Next Industrial Revolution

Manufacturers are still working out the kinks when it comes to finding, retaining and engaging the next generation of engineering, technology and factory floor talent. Simultaneously, they’re feeling their C-Suite personnel trickling into retirement. That’s leaving many unsure of how to staff the industrial revolution that’s underway—and speeding up.

The arrival of Industry 4.0, or the fourth industrial revolution, signifies the next era in manufacturing, in which plants, processes, products and people come together in an entirely new way. But with connectivity comes technology risk: Cybersecurity broke into manufacturers’ top five risks this year, with 96 percent citing potential security breaches in their filings. That’s a 50 percent jump from just four years ago.

Amid unprecedented innovation and change in the industry, many manufacturers have one critical question: How will we fund it? The National Association of Manufacturers (NAM) reports that 93.3 percent of manufacturers are positive about their own company’s outlook, up significantly from 56.6 percent last year and marking an all-time high for their survey. But hurdles remain: Capital availability is uncertain and chances that the Fed will raise rates sooner rather than later spurred a 31 percent jump in mentions of interest rates in manufacturers’ filings.

For much of the period of modern globalization, the search for lower production costs propelled a steady migration of American manufacturers’ plants overseas. Now, the combined forces of protectionist trade and immigration measures, rising commodity costs and sharpening international currency risks might be priming the industry to buck this trend. Almost all (94 percent) of manufacturers say their international operations and sales face threats this year.