Despite speculation of economic turbulence, the U.S. economy continued to grow in 2018, and the life sciences and health sectors saw high levels of deal making and investment.

Deal activity was catalyzed by the continued infiltration of technology as the health and life sciences ecosystem blurs and economies of care continue to change, centering more on value.

Most healthcare leaders (81 percent) expect innovative mergers—like Amazon’s acquisition of online pharmacy PillPack—to continue disrupting the industry in the next two years, according to BDO data. According to PitchBook data, those types of deals—and the push to share information across traditional boundaries to deliver greater value—are at the heart of U.S. health and life sciences activity. They’ve largely driven both increased deal volume and value over the last 10 years. U.S. private equity deal flow in life sciences has nearly doubled since 2008, though it began to plateau between 2017-2018. In healthcare, private equity deal flow increased since 2009 and reached a 10-year high in 2018 with 590 deals completed at a total value of $88 billion. U.S. healthcare M&A has also boomed, reaching a 10-year value peak of $171 billion in 2018—though the total number of deals fell compared to 2017.

To thrive in this environment of constant change, health and life sciences organizations will need to share information across traditional boundaries to deliver better patient outcomes, better treatments and better value for consumers—all while driving their own sustained growth and strong operational performance. 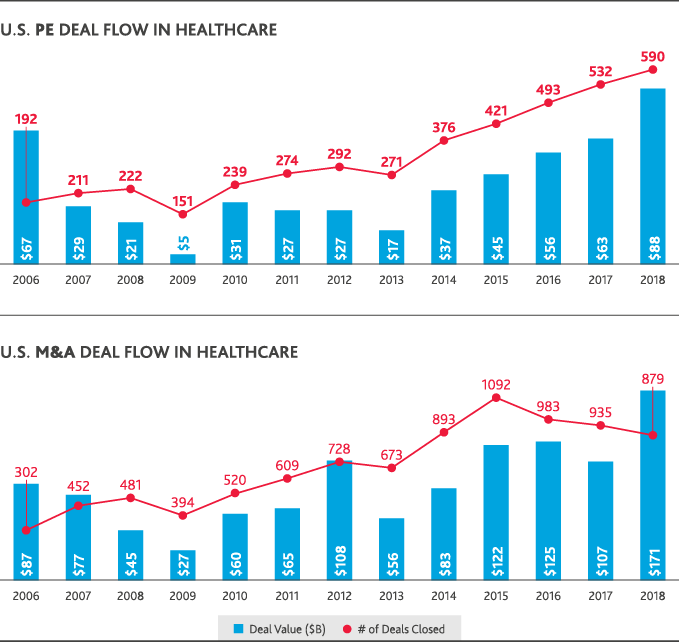 This move toward a strategy of Shared Care and Shared Value has been a driver of global deal flow throughout 2018 and will continue to drive opportunities.


China as the New Frontier

A few years ago, the Chinese government spelled it out: The country needs to develop a world-class healthcare sector to meet the changing needs of its population.

China’s five-year economic plan, approved in 2015 and adopted in 2016, designates a “Healthy China” as a priority, and encourages both inbound and outbound private investment in healthcare, with emphasis on the senior-care subsector.

Chinese investors are increasingly coming into the U.S. and European healthcare sectors seeking strategic alliances with companies that offer cutting-edge products, services, business models and distribution channels, with the goal of bringing them to China.

China is considered an El Dorado because it’s a 1.4 billion-person market—jampacked with the opportunity to bring about quality of life improvements to the larger Chinese population.

For example, China’s diabetes population—which is nearly one-third of the world’s diabetes sufferers—has undergone rapid growth that’s expected to continue. This represents a growing market for Western companies innovating around diabetes treatments to come in and provide important quality of life improvements.

Despite ripe conditions in the healthcare and life sciences industries for cross-border investment between the U.S. and China, international dealmaking activity was hamstrung by political conditions. U.S. healthcare M&A involving a Chinese acquirer fell to zero in 2018, compared to five U.S. healthcare deals totaling $618 million in value that involved a Chinese acquirer in 2017. Chinese healthcare M&A deals involving a U.S. acquirer reached a 10-year peak of just over $3 billion in 2015 but fell to a total $101 million for 2018 involving the same total number of deals.

Rocky trade relations, a newly emboldened Committee on Foreign Investment in the United States (CFIUS) and shifting economic conditions in China have complicated what was expected to be a booming opportunity—particularly in the biotech space—just a few years ago.

Last year was marked by a sharp increase in biotech deal activity as more than $100 billion poured into biotech and pharma M&A in the first 6 months.

The industry’s boom is even bringing demand for Wall Street analysts back to life.

Inbound and outbound private equity investment from China slowed, however, as the Chinese government restricted deal-making between foreign entities. Some would-be foreign buyers also reconsidered their transactions because of heightened government scrutiny.

The upward trend towards a higher volume of value-based pharmaceutical contracts in the U.S. continued, fostered by pressure to curb health costs and changes in the regulatory arena.

Ample opportunity for research investment to meet growing patient needs led to continued increased investor appetite that set the stage for a booming equity market in 2019. 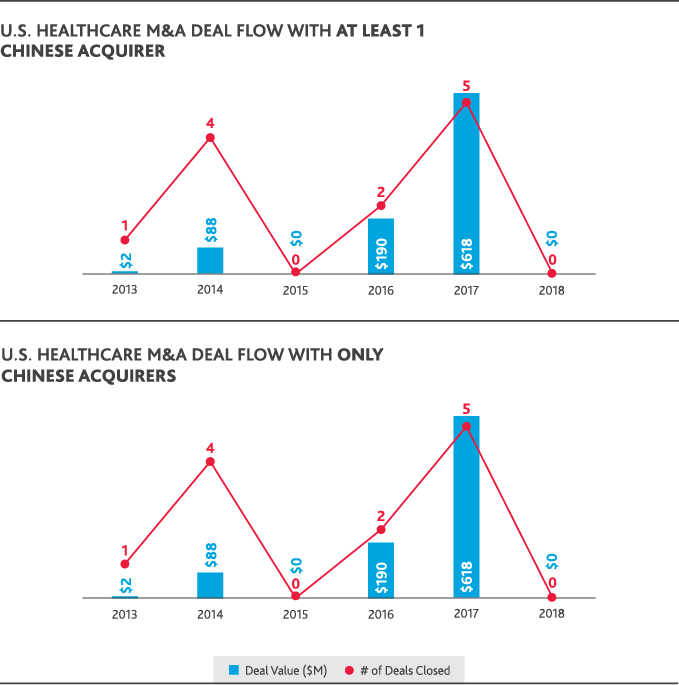 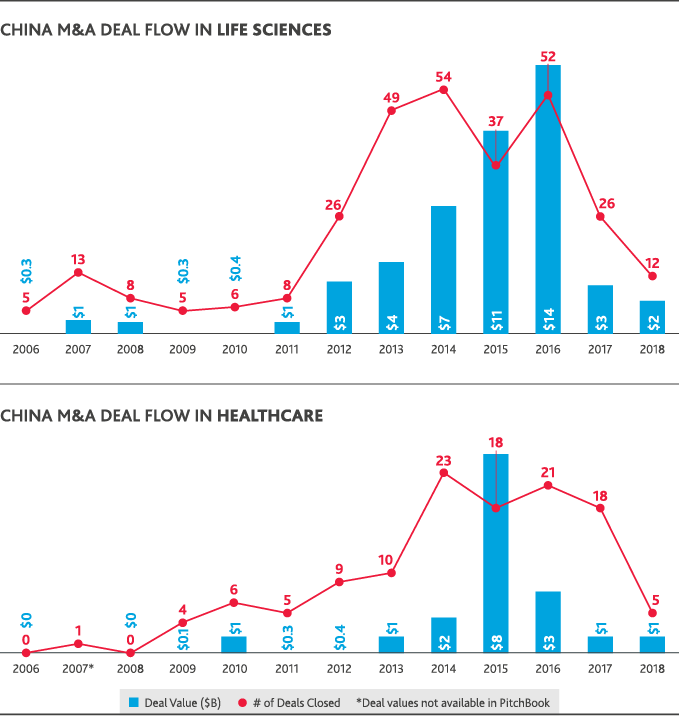 Underlining the opportunity “healthy China” presents, on April 30, 2018, a new rule allowing pre-revenue biotechs to sell shares on the Hong Kong Stock Exchange took effect. The aim of the change is to allow more biotech companies to raise capital through IPOs—giving them greater access to cash to fund research and innovation, which has historically been sluggish in the region.

Though several companies have capitalized on the rule—including Hangzhou, China-based Ascletis Pharma—organizations will have to navigate U.S.-China trade tensions and worries around a growing biotech bubble.

For example, just days after listing, Ascletis Pharma saw its shares dive as trade tensions hampered market sentiment, and in early January, U.S.-based drug developer Stealth BioTherapeutics shelved its plan to list on the exchange at all. More recently, CanSino Biologics, a Chinese vaccine maker, let its IPO application to the exchange expire in January 2019. The company’s previous investors include China’s state-owned Future Industry Development Fund and Lilly Asia Ventures, which is backed by Eli Lilly.

Looking ahead, we’ll likely see lower valuations for Hong Kong IPOs because of these challenging market conditions. To mitigate risk in this evolving market, clinical and financial due diligence is paramount. 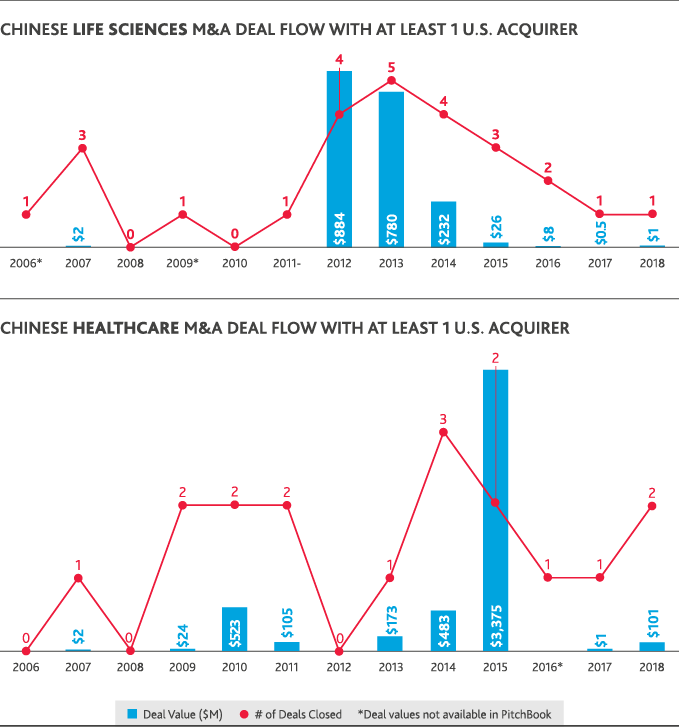 Return to Table of Contents

In addition to the ongoing tariff saga between the U.S. and China, the U.S. has targeted Chinese technology companies it alleges are involved with industrial espionage or are violating global business practices.

In February, the U.S. officially levied charges against Chinese tech giant, Huawei, after years of scrutiny and more recently ramped up those investigations.

Under the Trump administration, CFIUS has been granted increased authority, including through a mandate to take a stricter stance against China specifically. Under new regulations implemented in October 2018, foreign investments that result in a non-controlling equity stake in U.S. biotechs will be subject to CFIUS review.

Since CFIUS’ expanded powers only took effect towards the end of 2018, we likely won’t see their impact until the end of 2019. We anticipate that unless relations and the Trump administration’s stance towards China shift, we’re likely to see a significant decrease in Chinese investment in U.S. life sciences.  As long as relations remain chilly, tit-for-tat tariffs and regulation of foreign investment will continue, likely slowing cross-border dealmaking. Additionally, as stakeholders prepare for potential economic turbulence, there will be an increased focus over the next year on investments in sectors that fulfill constant, irreplaceable consumer needs. This may come at the expense of biotech, which may be perceived as riskier or less profitable in the short‑term.

For U.S. healthcare and life sciences organizations that do operate in China, the compliance challenges and issues around quality control and fraud are real.

Foreign-owned organizations with China-based subsidiaries also face heightened risk under the U.S. Foreign Corrupt Practices Act and the U.K. Bribery Act. This is largely because operating through a third-party intermediary is common practice for many foreign companies in China and relying on third-party agents poses significant bribery risk.

Foreign entities operating in China can manage risk by keeping the following best practices in mind:

Cultural change doesn’t happen overnight, but it does need to start from the top down. A fully aligned organizational culture change can take years to cement. If an organization is going to continue operations in China, where required, the sooner it begins revamping internal processes and procedures to account for the evolving risk environment, the better.