The FASB issued ASU 2018-10[1] which affects narrow aspects of the guidance in ASU 2016-02, Leases (Topic 842). The amendments included in this ASU clarify the intended application of certain aspects of the new leases guidance and correct cross-reference inconsistencies. The new ASU is available here, and has effective dates and transition provisions that align with an entity’s adoption of ASU 2016-02, except for entities that early adopted Topic 842, for which the amendments in this ASU are effective upon issuance.

In February 2016, the FASB issued ASU 2016-02 to increase transparency and comparability among organizations by recognizing lease assets and lease liabilities on the balance sheet and disclosing key information about leasing transactions. ASU 2018-10 includes sixteen narrow amendments to the leases standard resulting from implementation activities such as discussions between the FASB and stakeholders, technical inquiries, and routine Codification feedback.

The amendments in ASU 2018-10 are similar in nature to those in the FASB’s ongoing project to make improvements to clarify the Codification or correct unintended application of the guidance. However, the FASB decided to issue a separate ASU for improvements related to the new leases guidance to increase stakeholders’ awareness and expedite the improvements.

Some stakeholders questioned whether a negative rate implicit in the lease could be used for sales-type leases with significant variable payments in lieu of recognizing a loss at the commencement date of the lease (a Day-1 loss). The Board however clarified that a Day-1 loss is the intended outcome.

The following summarizes the determination of the rate implicit in the lease under the ASU: 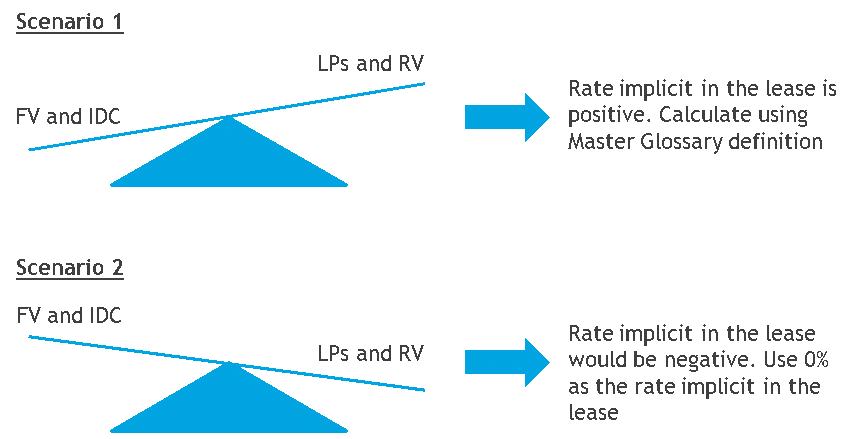 ​Impairment of Net Investment in the Lease
The amendments in the ASU clarify the application of the impairment guidance for lessors when determining the loss allowance of a net investment in a lease, including the cash flows to consider in that assessment.

Certain Transition Adjustments
Amendments were made to both the lessee and the lessor transition guidance to clarify whether to recognize certain transition adjustments to earnings rather than through equity when an entity applies Topic 842 retrospectively to each prior reporting period and the entity does not elect the package of practical expedients in paragraph 842-10-65-1(f).[2]

The amendments to the transition guidance bring important clarifications about whether certain transition adjustments should be recorded in earnings rather than through equity when an entity applies Topic 842 retrospectively to each prior reporting period and the entity does not elect the package of practical expedients. The amendments to the transition guidance focus primarily on unamortized initial direct costs that no longer meet the definition of initial direct costs under Topic 842 and on transition adjustments for situations in which the classification of a lease changes. Prior to those amendments, the transition provisions required such adjustments to be recorded through equity only.

Other Codification Improvements Made

For entities that early adopted Topic 842, the amendments are effective upon issuance of the ASU, and the transition requirements are the same as those in Topic 842.

In January, the staff of the SEC's Division of Corporate Finance published an update to the Financial Reporting Manual and released new Compliance and Disclosure Interpretations.

BDO supports the Board’s proposal to allow private entities to use the written terms and conditions of a common control arrangement to determine whether a lease exists, but requests certain clarifications.

BDO supports incorporation of a chapter that describes a reporting entity into the Conceptual Framework but recommends certain changes.