As business owners inch closer to retirement, the decision about what should happen to their business, and to some degree their legacy as a business owner, becomes more pressing. With global tax rates only expected to increase to pay for costs associated with the coronavirus pandemic, many shareholders are actively looking to accelerate the timing of corporate transactions. There are many exit strategies to consider, such as selling to a third party or transitioning the business to senior management or family. This decision can weigh heavily on the minds of business owners, as they worry about a fair return for their years of hard work, as well as their legacy and the wellbeing of their employees. While many options exist, one that has seen an increase in global popularity is selling a majority or minority stake in the business to the employees of the company. As outlined below, there are substantial tax incentives associated with such a sale.

The two countries that have some of the more favorable tax laws relating to employee ownership are the UK and the U.S. The current tax laws in both countries favor employee ownership and there has never been a better time for directors and shareholders to sell the business to the employees of the company. The Employee Ownership Trust (EOT) in the UK and the Employee Stock Ownership Plan (ESOP) in the U.S. are true employee ownership models in that the company is sold to the employees through a trust for the benefit of the current and future employees of the firm. The key benefits of the EOT and the ESOP are that they create an immediate purchaser for the company, they address succession issues that can be a real challenge for family-owned businesses, and they allow employees to take a more active and constructive interest in the company. Research in both countries has found that when the employees are a company’s greatest assets, the employee-ownership model can be the “go to” model for a corporate sale as it offers greater employee engagement and commitment, greater drive for innovation and improved business performance.[1]

The key difference between the EOT and the ESOP model is that in an ESOP, the employees receive beneficial shares in individual retirement accounts and when they leave the company or retire, they receive payment from the company for the value of those shares. Under the EOT model, the employees do not receive actual shares; instead, the trustee of the EOT holds the shares for and on behalf of all employees in the company.

Another stark difference between the ESOP and EOT model relates to a minority sale of a business. An EOT must have a controlling interest in the company, whereas an owner can sell a minority interest to an ESOP. In both models, if the company is sold, the employees share in the proceeds from the sale. If the trustee of the EOT sells the company to a third party, and the former shareholders receive all their proceeds from the transaction, any excess proceeds would be divided amongst the employees after any capital gains tax liability has been paid. The sales proceeds can be split equally between all group employees, or the trustee of the EOT can divide the proceeds between the group employees based on one or more of the following three criteria: (i) length of service; (ii) hours worked; and / or (iii) levels of remuneration. Most companies that are sold to an EOT put in place new, tax-efficient share plans to lock-in, incentivize and reward key management post-disposal of the company to the EOT. In contrast, an ESOP allocates proceeds based on vested shares. A recent and powerful example of this is the sale of New Belgium Brewing, headquartered in Fort Collins, Colorado. New Belgium was 100% ESOP-owned and was sold to Lion Little World Beverages in Australia for $190 million, which was split among employees based on their total vested shares in the ESOP plan.

The UK and U.S. governments have continued to add various tax breaks for both sellers and the operating company in the EOT and ESOP models, respectively. The UK government strongly supports the idea of employee ownership and has offered substantial tax exemptions to shareholders and employees that move to an employee ownership model. UK tax resident shareholders are able to sell their shares in a qualifying trading company for full market value and claim a full statutory capital gains tax exemption so that they receive the full gross disposal proceeds. In addition, any company that is controlled by the trustee of an EOT can make tax-free bonus payments of up to £3,600 per employee per annum.

In the U.S., a selling shareholder of a C Corporation ESOP can defer capital gains if proceeds are invested in a certain way. The key difference in tax law relates to the operating entity and the applicable tax deductions. In the UK, the trading company is not able to claim a corporation tax deduction for any payments that it makes to the EOT (which will be used by the EOT trustee to pay the former shareholders their deferred disposal proceeds) on the basis that the payments are deemed to be capital rather than revenue in nature. An ESOP in the U.S. can take tax deductions based on the total eligible payroll. If the operating company is an S Corporation and a company sells 100% to an ESOP, it can be fully exempt from federal and most state income taxes.

The ESOP may be the most well-known employee ownership vehicle in the U.S., but the EOT model is also possible in the U.S. through a perpetual trust. The tax advantages are not yet as great as those related to an ESOP sale, but there are efforts in motion to ensure that the EOT model in the U.S. has similar tax benefits as the UK EOT model. Currently, Maryland, New York and Wisconsin offer a state capital gains tax exemption if selling a majority portion of the business to an EOT.

The below grid compares the two employee ownership models: 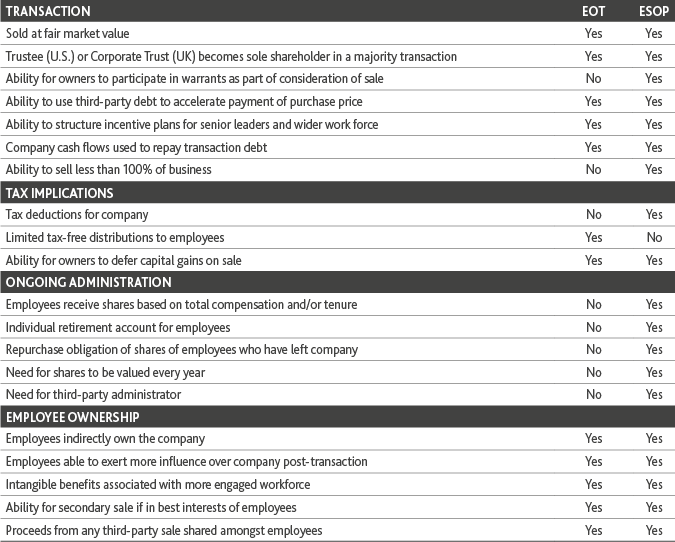 For multinational companies, employee ownership requires collaboration across borders and consideration of complex international accounting and tax issues. When a company based in either the UK or the U.S. decides to transfer ownership to employees, one challenge that may arise is that other countries do not share the same benefits of employee ownership. For instance, if a U.S. company sells to an ESOP but has operations in Canada, France, Italy, Spain or the United Kingdom, employees in those countries may participate in the ESOP but would have to pay taxes on the allocated shares. It would not make sense to include those employees in the ESOP plan, but they may participate in a benefit plan that mirrors the benefits other employees receive from the ESOP. These plans can take various forms, whether it be through a management incentive plan, phantom shares or a defined benefit plan. By leveraging tax technology and automation, the reporting and tax rules by jurisdiction can be easily understood and applied. BDO’s Global Equity Mobility Solution (GEMS) considers specific compensation data, employee mobility and local tax code to deliver an advanced knowledge base and tax requirements that can be dispersed to payroll, equity administrators, employees and tax service providers to help companies maintain global compliance.

BDO UK and BDO USA have dedicated employee ownership practices that advise business owners who wish to sell or transfer their business. BDO is a leading advisor on both sides of the Atlantic and together our teams can advise shareholders throughout the entire sale and ensure that benefit plans and tax strategies align across a global business.

This content was originally published by BDO in the United Kingdom.