The 2021 final foreign tax credit (FTC) regulations make significant changes to the FTC rules for U.S. multinationals. In addition to a variety of other modifications, the final regulations overhaul the 2020 proposed regulations regarding the Section 245A dividends received deduction (DRD) to deny a credit or deduction for certain foreign income taxes paid or accrued by domestic corporations, successors, and foreign corporations — with retroactive effect. The final regulations also address the rules regarding the timing of when foreign taxes accrue and in which year taxes may be claimed as a deduction or a credit.

FTC or Deduction Disallowance Under IRC Section 245A

Overview
Subject to certain requirements, Section 245A exempts from federal income tax certain foreign income of a domestic corporation1 through a 100% DRD for the foreign source portion of dividends received from specified 10%-owned foreign corporations (SFCs).2 Under this form of participation exemption, if a Section 245A DRD can be claimed in the U.S. for a foreign dividend received, no FTC or deduction is permitted for any foreign taxes, including withholding taxes, that are paid or accrued in the foreign jurisdiction with respect to that same dividend. 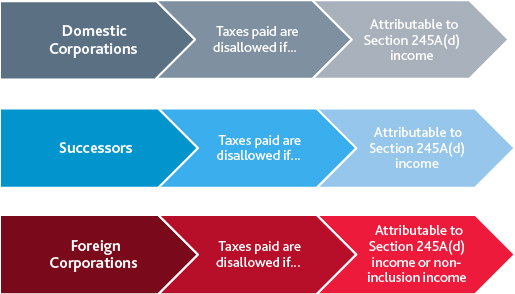 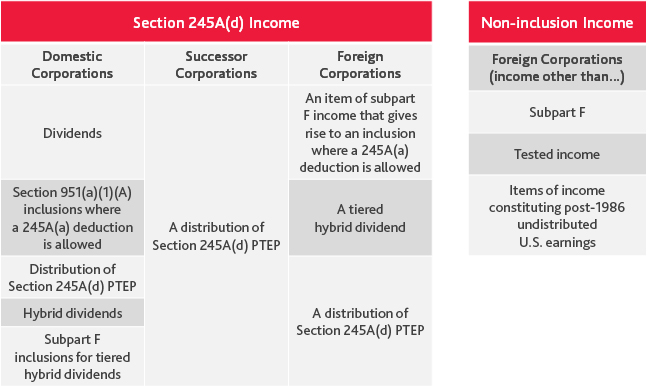 The following are three basic examples illustrating the potential effects of the Section 245A(d) FTC and deduction disallowance rules as a result of the final regulations: 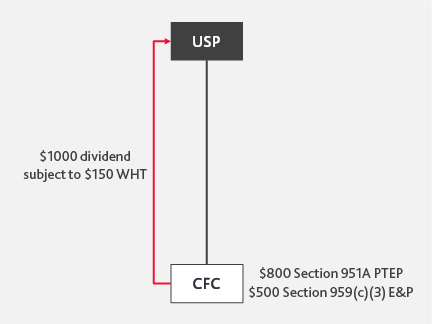 Figure 3
Additionally, the final regulations expand the range of transactions to which the FTC or disallowance rules under Section 245A(d) apply to include not only foreign income taxes that are paid or accrued with respect to certain distributions or inclusions, but also other transactions as illustrated in Figure 3:

Effective Date
The final regulations pertaining to FTC or deduction disallowance under Section 245A(d) apply to tax years beginning after December 31, 2019 and ending on or after November 2, 2020.

Given that the provisions in the final regulations pertaining to an FTC or deduction disallowance under Section 245A(d) have retroactive effect, and the scope of transactions to which these rules apply has been broadened, taxpayers should revisit any calendar year or fiscal year federal tax filings that fall within the effective date and review positions taken that may be inconsistent with the final regulations. To the extent a taxpayer needs to revise positions taken in a prior year, amended returns or other tax controversy procedures should be considered.

Accrual and Cash-Method Taxpayers
Under the Section 901 regulations,3 an accrual-method taxpayer is permitted to deduct additional taxes paid (as a result of a foreign tax redetermination) in the year in which the taxpayer has elected to claim a credit for foreign income taxes, even though the additional taxes relate back and accrue in a prior year in which the taxpayer deducted foreign income taxes. The final regulations require a taxpayer to elect to claim an FTC within a 10-year statute of limitations (SOL), as well as decide to deduct foreign taxes in lieu of a credit within a three-year SOL. The final regulations also confirm the applicability of the “relation-back doctrine,” which treats foreign income taxes as accruing at the end of the year to which the tax relates once the “all events test” is met. Lastly, contested foreign income taxes do not accrue until the dispute is resolved, even if the taxpayer remits the contested taxes in an earlier year – subject to an election to claim a provisional credit.

For cash-method taxpayers, a foreign income tax is generally creditable when paid. However, the final regulations allow a cash-method taxpayer to make a Section 905(a) election to claim FTCs on the accrual basis – even for taxes paid during the year but that relate back to prior years. This is a one-time, irrevocable election that must be made on a timely-filed original Form 1116 or Form 1118. The Section 905(a) election can be made on an amended return only by a taxpayer that has never claimed an FTC.

Correcting Improper Methods of Accounting
Taxpayers are required to file Form 3115 to obtain permission to change from an improper method to a proper method of accruing foreign income taxes. The final regulations provide that the modified cut-off approach is used for adjusting foreign income taxes that can be claimed as a credit or deduction in the year of the change.

Foreign Tax Redeterminations
The final regulations expand the definition of a foreign tax redetermination to include changes to the foreign income tax liability that affect a taxpayer’s U.S. tax liability, even if such changes do not affect the amount of FTCs claimed by the taxpayer. Additionally, a change from deducting to crediting foreign income taxes (and vice versa) is treated as a foreign tax redetermination under Section 905(c), and the IRS is permitted to assess and collect any tax deficiencies in intervening years resulting from a change in election, even if the three-year statute of limitations has expired.

Taxpayers should review the FTC timing rules under the final regulations and assess the potential effect of these provisions. Additionally, given the expanded definition of a foreign tax redetermination, there may be additional instances in which taxpayers will be required to file one or more amended returns.

The 2021 final foreign tax credit regulations are complex and include several changes affecting U.S. multinational taxpayers. For a discussion of the modifications to the rules regarding when a foreign levy is considered a creditable tax and the rules for allocating and apportioning foreign income taxes for FTC purposes, see BDO’s article Key Impacts of the Final Foreign Tax Credit Regulations.

How BDO Can Help

BDO can assist multinational taxpayers with a comprehensive review of their global tax liabilities and U.S. foreign tax credit calculations to help assess and plan for the impact of the final regulations on their overall effective tax rate. For more information, contact BDO.


[1] Not including a real estate investment trust or a regulated investment company. A one-year holding period under Section 246(c) is also required to be met.
[2] An SFC means any foreign corporation with respect to which any domestic corporation is a U.S. shareholder.
[3] Treas. Reg. §1.901-1(c)(3).

Planning to deduct for losses this tax season? Be sure to read the fine print.

Planning to deduct for losses this tax season? Be sure to read the fine print.

Deducting losses is a high-priority item for taxpayers in the highest marginal income tax bracket.