In the second half of 2021, the retail industry reaped the benefits of low interest rates and government stimulus money that invigorated consumer spending.

While the most vulnerable retailers succumbed at the beginning of the pandemic in 2020, the industry at large was better positioned to stay afloat with these lifelines in 2021 despite some economic and industry-specific challenges. The slowdown in the number of retail bankruptcy filings seen in the first half of 2021 continued well into the second half, with only three retail filings. There were no new filings by retailers from mid-September 2021 through mid-February 2022. Further, of these three filings, two of the retailers were brand groups that sold goods through other retailers, but did not have brick-and-mortar stores. As a result, the filing retailers had few or no store closings.

The U.S. economy has rebounded well since plunging into recession at the beginning of the pandemic. The Commerce Department reported the U.S. economy grew 5.7% in 2021, the highest annual increase since 1984. The growth in the fourth quarter was 6.9%, a steep rise from the 2.3% achieved in the third quarter of 2021. This growth also represented a notable turnaround from the 3.4% contraction in 2020, which was the biggest GDP drop since 1946, according to the National Bureau of Economic Research. Holiday sales skyrocketed, up 11% compared to the same period in 2019. E-commerce sales saw a 61% spike, according to a Mastercard SpendingPulse report.

Another macro-economic concern for retailers at the end of 2021 was the expiration of monthly payments given through the expanded Child Tax Credit. At the same time, Americans took on more debt in 2021 than in any year since before the 2008-2009 financial crisis. As loan and card payments come due, consumers may start to curb their spending in favor of paying off debt.

Following the trend first observed in the first half of 2021, retailers announced fewer store closings in the second half of the year. There were more store openings than closing announcements, as many struggling retailers had already right-sized their store footprints. Apparel retailers, drug stores and department stores made the vast majority of store closing announcements in the second half of 2021, as many of these retailers reduce their store footprint to shift their focus to e-commerce.

We continue to see a large number of store openings by dollar stores, discounters and warehouse clubs, which accounted for more than half of the store openings in the second half of 2021. As inflation continues to erode wage growth, we’ll see consumers rely on discount options to maximize their dollars.

Direct to consumer, digital native brands like Warby Parker, Parachute and Fabletics are continuing to open brick-and-mortar stores. These physical stores can serve as a hub where customers can test and try on products with the option to purchase in-store or online. Additionally, for these direct-to-consumer brands, a physical location is a way to build exposure and grow customer loyalty when located in a high-foot-traffic location. 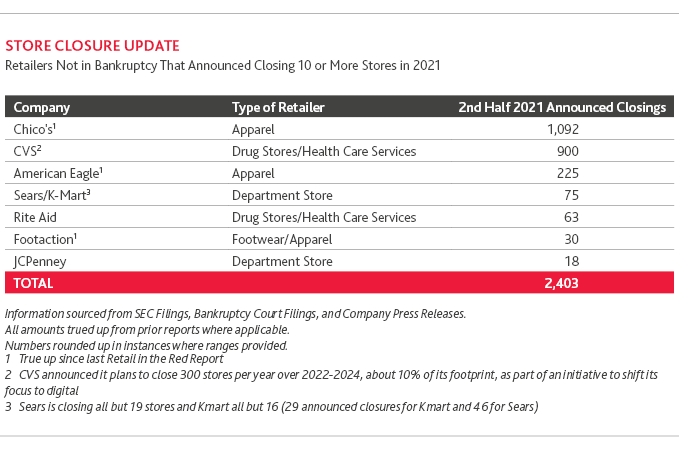 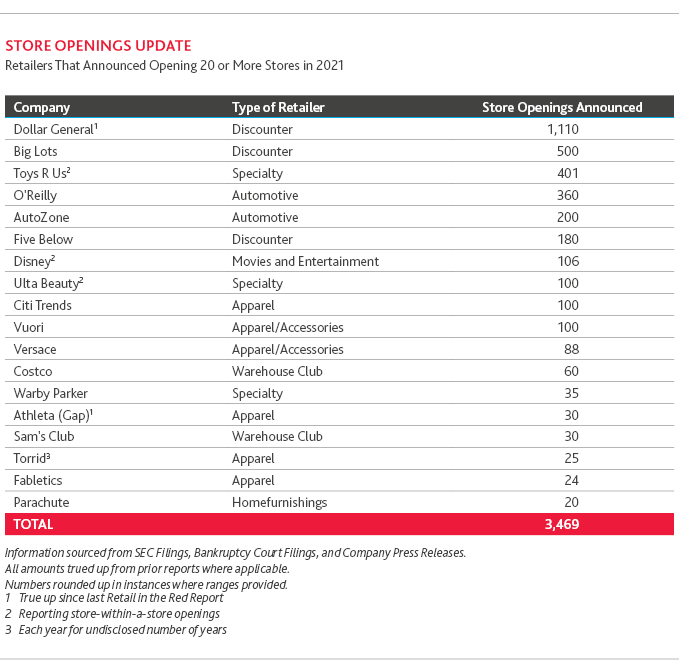 The U.S. Bureau of Labor Statistics reported the Consumer Price Index (CPI) for all items rose 7% for the 12 months ending December 31, 2021, the largest 12-month increase since the period ending June 30, 1982. For example:

Total household debt at the end of 2021 was approximately $15.6 trillion, up $1.02 trillion from $14.6 trillion in 2020, due primarily to home and auto loans, the highest jump since 2007. During the last three months of 2021, credit card balances grew by $52 billion to $860 billion, the largest quarterly increase in the 22-year history of the data, according to the Federal Reserve Bank of New York. A survey by LendingTree revealed 36% of consumers went into debt this past holiday season, owing an average of $1,249. Most of this debt was carried on credit cards, but 40% of Americans used buy now, pay later financing. And 82% of consumers with holiday debt said they won’t pay it off within a month, despite credit card interest rates rising to an average of 17.13%, just under the all-time record high of 17.14% reached in 2019.

CONSUMER SENTIMENT FALLS, AND IS NOT EXPECTED TO REBOUND

The average U.S. consumer spent 76% of their budget on non- discretionary items from 2018-2020, according to data from the U.S. Bureau of Labor Statistics. During that period, the average inflation rate was around 1.8%.

Inflation is impacting all areas of consumer budgets, indicating that we are unlikely to see the value of the dollar improve anytime soon. Moody’s Analytics estimates that, when compared with a more normal rate of inflation, typically a little under 2%, the current level of inflation is costing the average household $276 a month. In addition, U.S. consumer sentiment fell to its lowest level in more than a decade in early February, due to expectations that inflation will persist in the near term.

The University of Michigan reported consumer sentiment fell to 62.8 in February, down from 67.2 in January, which is a 10-year low. With the cost of goods rising, it is likely we will see a reduction in consumer spending sometime in 2022. In particular, the proportion of spending on essential purchases, such as gas and groceries, is expected to expand, thereby reducing the amount available for discretionary spending.

NielsenIQ’s latest Consumer Outlook survey (see chart below) indicates consumers are mindful of inflation’s impact on their budgets. In 2022 consumers expect to spend more on groceries, gasoline, utilities, and at-home basics and less on discretionary expenditures.

If consumers start cutting back on spending in response to inflation, we expect certain weaker retailers may have difficulty competing with bigger and financially stronger competitors, leading some to financial distress. 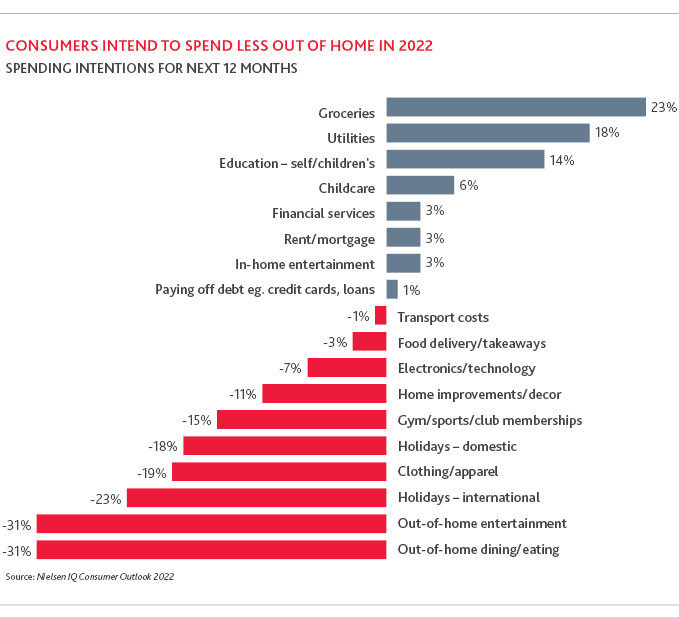 The NRF and Appriss Retail reported retail returns were expected to increase to $761 billion in 2021, accounting for an average of 16.6% of total U.S. retail sales, up from 10.6% in 2020. A CBRE- Optoro report indicated holiday returns would cost retailers 7% more when factoring in labor, transportation and warehousing costs. These higher return costs, on top of a higher return rate, will likely negatively impact retailer profitability. In an attempt to minimize the frequency and cost of returns, retailers are implementing various policies, including:

The current high levels of inflation are likely to undermine the otherwise robust economic recovery. Higher prices for goods, plus the increase in consumer debt, means there will likely be less discretionary spending for many American families as they are forced to shift their budgets to cover the higher costs of basic necessities. If price growth continues to outpace wage growth, this will likely result in decreased revenue for certain retailers in 2022. The limits on consumer non-discretionary cash will become a factor in shaping the next wave of winners and losers in the industry. Additionally, we are likely to see a disparity between small and large businesses’ ability to weather high inflation, supply chain issues and increasing wages. In order to fund additional expenses caused by these factors, many small retailers have had to increase their borrowings from lenders, now that PPP loans are no longer available. These smaller retailers will be more susceptible to financial distress if their liquidity shrinks as interest rates rise.

Nevertheless, we expect retail bankruptcy filings to remain low in the first half of 2022, as long as lenders maintain flexibility and interest rates stay relatively low, even as the Federal Reserve has begun to raise interest rates this year. Retailers will continue to need physical space to fulfill online orders. Savvy retailers will reimagine brick-and-mortar spaces to attract new customers and entice existing online customers to visit physical stores. This will likely result in new store openings matching or exceeding store closures again in the first half of 2022.