An Overview of U.S. Retail Bankruptcies and Store Closures in the Second Half of 2017

Retail bankruptcy filings continued at a rapid pace in the second half of 2017, with a dozen retailers owning 20 or more stores filing for bankruptcy. It was a tough year for retailers overall. Four bankrupt retailers (Payless ShoeSource, Rue 21, Gymboree and The Limited) closed a combined 1,800 stores in the first six months, and retailers closed nearly 7,000 stores throughout 2017, according to Fung Global Retail and Technology. What can the latest round of retail bankruptcies and store closures tell us about what to expect in 2018? 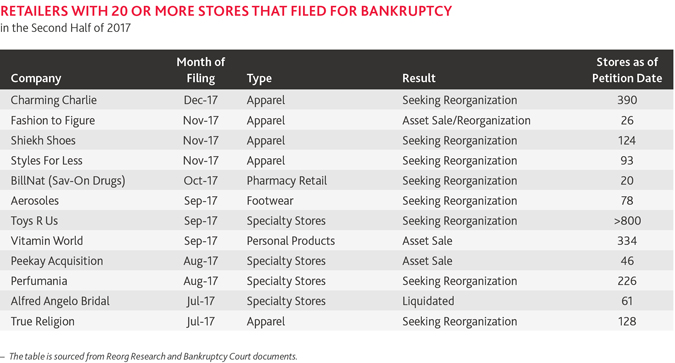 Many bankrupt retailers point to e-commerce competition as a main catalyst for declining sales. Lower overhead enables e-commerce companies to undercut the prices of many traditional retailers. Pricing pressures are squeezing the profit margins of brick-and-mortar stores and have been for several years. Moody’s Investor Service reported that 13.5 percent of its retail and apparel portfolio was distressed at the end of 2017, not far off from levels during the Great Recession (16 percent).

Changing consumer spending behaviors are also putting additional stress on retailers. A strong U.S. economy isn’t translating to stronger sales as it once did. Wage growth has been slow, U.S. household debt is at record levels and consumers are spending money in an entirely different way than before. In 1977, clothing accounted for 6.2 percent of U.S. household spending; now, households spend half as much (3.1 percent), according to the U.S. Bureau of Labor Statistics. Consumers are reserving a larger share of their budget for big-ticket items like cars, travel, food, technology and healthcare.

For the first time since 2009, the total number of U.S. stores dropped. Apparel specialty stores and apparel-focused department stores located in shopping malls are heavy contributors to this decline. 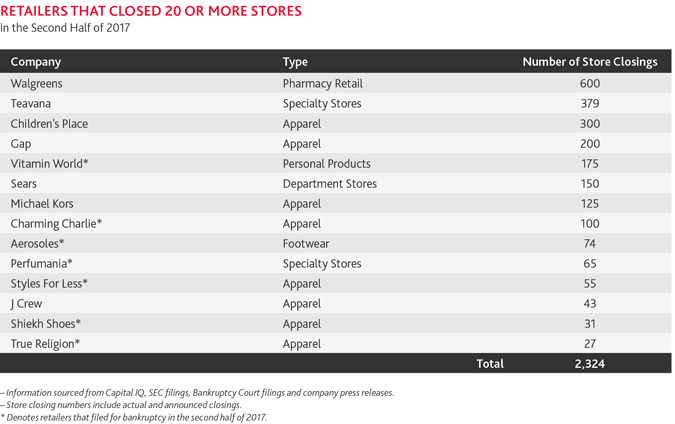 Specialty apparel retailers are being swarmed by competition, not only from e-commerce, but from discount stores (such as Walmart, Target and dollar stores), and higher-growth affordable fashion retailers (such as H&M and Zara).

The waning popularity of malls has also been wreaking havoc on sales. Older malls that were built in the 1950s-1970s have long relied on department store anchors for foot traffic and to attract other specialty apparel tenants. Declining store traffic has forced many mall operators to close doors and address changing consumer demographics and shopping preferences. Mall owners are now relying less on anchor tenants and are using apparel store closures as opportunities to reshape their retail offerings to include a more diverse mix of tenants. Leisure stores, entertainment, grocery stores, restaurants and other everyday-goods retailers, for example, are less vulnerable to e-commerce migration than special apparel retailers.

We’ll continue to see a heavy dose of store closings in 2018, as retailers consolidate underperforming stores and wrestle with declining foot traffic.

Commercial real estate firm CoStar estimates that 310 of the roughly 1,300 U.S. malls are at high risk of losing an anchor tenant. Cushman & Wakefield predicts 12,000 stores will close in 2018 (up from 9,000 in 2017) and at least 25 major retailers will file for bankruptcy this year.

But it’s not all bad news. The grocery and dollar store segments are a bright spot, with major retailers opening over 2,500 new stores throughout 2017. Dollar General, Dollar Tree, Aldi, Five Below, Lidl, Ross Stores, TJX Companies and Ulta are all expanding in off-mall locations. They seem to have tapped into the success formula working for consumers at the moment, marrying the right products with the right place at the right price. One clear message for all retailers: listen to consumers and adapt, or die.