Following an optimistic second quarter marked by strong consumer spending, the restaurant industry experienced continued growth through 2018’s third quarter. Thanks in large part to higher menu pricing and a slowdown in promotional discounting, the sector enjoyed a 1.4 percent overall same-store sales increase. Restaurants also weathered September’s Hurricane Florence along the Southeast coast, which had a lesser impact on sales than Hurricanes Harvey, Irma and Maria in the third quarter of last year.

Increasingly, it appears the restaurant industry’s middle ground is disappearing—successful brands either embrace new approaches or stand steadfastly by established concepts. Despite a reported 1.3 percent decline in restaurant traffic, some brands seemed to boost same-store sales through the rapid expansion of delivery capabilities. Restaurants, especially those in the fast casual sector, faced increased pressure to offer a seamless delivery experience—and quite a few appear to have risen to the challenge. This enabled these brands to offset declining store traffic with an influx in delivery sales, resulting in positive same-store sales figures.

Fast casual remained the industry-leading sector through the third quarter of 2018, reporting a 2 percent uptick in same-store sales. Fast casual’s same-store sales rally was led by Pollo Tropical, up 5.3 percent, and Taco Cabana, who reported an impressive 8.1 percent boost. Both brands thrived as a result of rebranding efforts and menu restructuring that placed less emphasis on promotional discounts and more on higher quality offerings. Wingstop (+5.0 percent) also exhibited strong same-store sales performance as a result of innovative digital advertising campaigns and expanded delivery capabilities. Alternatively, Zoe’s Kitchen, in the midst of being acquired by the Cava Group, experienced a weighty 7.6 percent sales decline as it struggled through its adoption of delivery capabilities.

Casual restaurants fared well through the third quarter, with 1.6 percent overall same-store sales growth. Those leading the sector this quarter included Texas Roadhouse (+5.5 percent) and Applebee’s (+7.7 percent), both of which attributed success  to the reintroduction of several limited-time offers (LTOs). For Applebee’s, successful LTOs included the resurrection of its popular Riblets dish, as well as several one-dollar cocktails, like the Strawberry Dollarita. Meanwhile, Red Robin (-3.4 percent) and Cracker Barrel (-0.4 percent) experienced soft sales results through the quarter.

Upscale casual continued to turn around over the course of 2018’s third quarter, posting a 1.4 percent same-store sales uptick, double the growth the sector reported through Q2. The category was led by Stoney River Steakhouse & Grill, which reported a 5.6 percent jump in same-store sales thanks to a one percent overall menu price increase. The Cheesecake Factory continued to rebound, attributing its 1.5 percent same-store sales gain to improvements in both dine-in and take-out customer satisfaction scores. While upscale casual chains, including Del Frisco’s Double Eagle Steak House (-2.4 percent), saw weaker sales, the sector’s strong overall performance demonstrates the staying power of a well-established brand.

Just behind upscale casual, quick serve continues to perform well, with a 1.2 percent overall same-store sales boost through the third quarter. Gains can be attributed to the aggressive push of some QSRs into delivery—namely, McDonald’s (+2.4 percent) and Taco Bell (+6.0 percent), which both benefitted from expanding their partnerships with third-party delivery services. McDonald’s, in particular, credits its higher average check size to an increase in delivery orders. Of course, both McDonald’s and Taco Bell also attribute strong sales to the continued success of their LTOs. Underperformers in the quick serve sector included Steak N’ Shake (-6.9 percent), which said soft sales in Q3 were a result of weak performance of new entrées.

The pizza segment’s same-store sales continued to slip through Q3, reporting a 0.8 percent decline overall. Though Domino’s (+4.9 percent) enjoyed its continued sales streak and Pizza Hut (+3 percent) noted a steady turnaround from the second quarter, the segment’s overall performance was throttled by Papa John’s (-13.2 percent), which continues to be plagued by reputational challenges.

Through September, beef prices were up a modest 1.7 percent and cheese prices climbed 5 percent. Due to recent tariffs associated with trade tensions, and a reduction of U.S. pork exports to China and Mexico, the cost of pork declined a considerable 6 percent over the quarter. As a result, many restaurants sought to promote pork, often through LTOs, to take advantage of the potential savings. Egg prices continued to rise, though it should be noted that as a low-cost commodity, eggs’ 33 percent price spike isn’t as drastic as it may appear.

A higher cost of sales through Q3, up to 28.8 percent, led to many restaurants strategically upping menu prices as they sought to offset higher labor expenses.

The costs of labor averaged 31.2 percent through September as restaurants faced pressure from their competitors to pay their employees not just minimum wage but, in many cases, a few dollars higher. This comes at a time when restaurant workforce turnover continues to increase, and restaurants are beginning to offer perks like maternity leave and mentorship programs in order to both attract and retain qualified talent. Restaurants in urban areas face heightened recruiting challenges as many have drastically raised entry level wages to compete for skilled workers.

What’s Next for Restaurants?

In the months to come, restaurant IPO and M&A activity is expected to continue at a healthy pace. Ramped up restaurant deal activity, including Sonic’s sale to Inspire Brands and Bojangles’ sale to Durational Capital Management and The Jordan Company, means that sector valuation will continue to be strong. As a result, however, acquisition premiums are expected to decrease, making expensive buyouts much less likely.

Separately, although restaurants sales were not impacted by natural disasters through the third quarter as they were in Q3 2017, companies should be prepared to feel the impact of the devastating wildfires in California in their fourth quarter reporting.

Moving forward, it is important that restaurants consider their customers’ shifting priorities and the unique challenges posed by expanding their delivery and digital capabilities. Facing intense pressure from competitors, restaurants may feel the need to charge toward innovation—but for innovation to be sustainable, sound financial and operational management must come first. 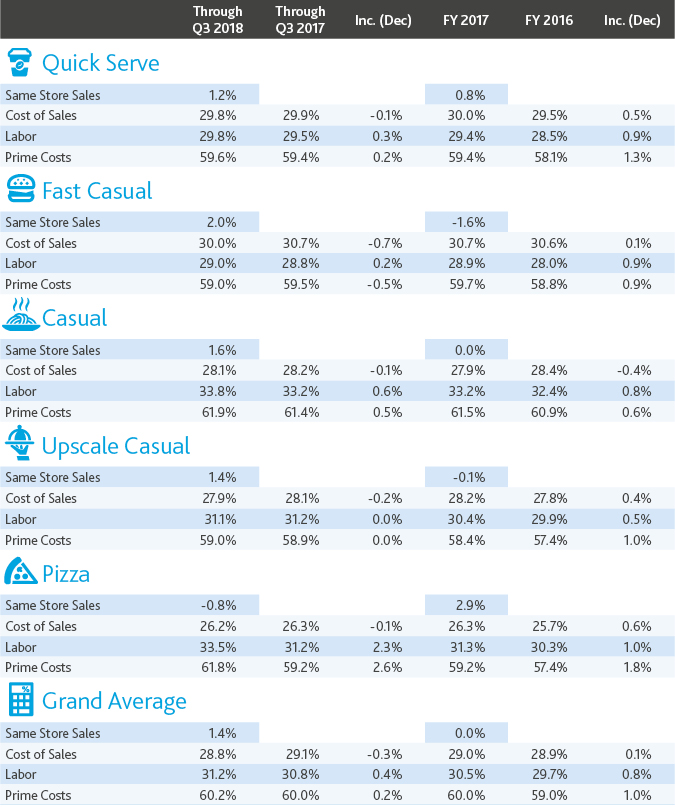