The restaurant industry topped off 2018 with a 1.5 percent increase in same-store sales. Higher menu pricing and cost-cutting measures executed throughout the year helped mitigate the effects of declining foot traffic, higher labor costs, and rife competition. As restaurants sought to differentiate from and rise above their peers, 2018 saw more investment in advertising and delivery services, as well as efforts to entice patrons with limited-time offers.

The fast casual segment ended the year with same-store sales up 2.7 percent, lifted by Wingstop, which saw 6.2 percent same-store sales growth through Q4 2018. The company has been investing significantly in brand awareness and innovation. Beginning this year, it is requiring franchisees and company-owned restaurants to contribute 4 percent of top-line sales to a national advertising fund, up from 3 percent last year.

Taco Cabana and Pollo Tropical saw same-store sales growth of 4.5 and 2.2 percent, respectively. Parent company Fiesta Restaurant Group attributed the improvement in part to sales from new restaurants, which were slightly offset by permanent restaurant closures, and a favorable comparison to 3Q 2017, which saw a negative impact from hurricanes.

Relying heavily on value, with big players rolling out limited-time offers and unique menu items like Taco Bell’s nacho fries, quick service restaurants’ same-store sales were up 1.3 percent. Taco Bell (+4 percent) led the segment, followed by Carrols Restaurant Group (+3.8 percent), a Burger King and Popeyes franchisee. Among the bench markers for the segment, the only company that posted negative results was Steak N Shake (–5.1 percent), which saw a 7 percent decrease in customer traffic for the year.

Contrary to analyst expectations, wildfires did not have a lasting impact on most restaurant results by the end of the year.

Meanwhile, in pizza, Domino’s sales were up 4.8 percent, while Papa John’s declined 9.0 percent; Pizza Hut closed the year flat. The segment as a whole fell 1.4 percent for the year.

In commodities, the price of poultry, pork, cheese, and fresh veggies all dropped, in some cases reversing 2017 trends. Pork was down 6.1 percent for the year as record pork volumes led to lower prices and prompted producers to seek international buyers. U.S. pork prices for 2019 are expected to be competitive, and exports are projected to rise 3 percent.

U.S. poultry production, by far the largest in the world, is expected to rise 2 percent to a record 19.7 million tons in 2019, driven by growth in domestic and foreign demand, according to the USDA. Meanwhile, the cost of eggs in 2018 more than doubled that of 2017, rising 31.6 percent through Q4.

Cost of sales were down marginally, ending the year 0.3 percent below the end of 2017. To alleviate the pressure on margins resulting from these dynamics, restaurants are raising menu prices, reevaluating operating hours, closing underperforming locations, and changing work shifts, while implementing initiatives to attract and retain talent.

The cost of labor rose 0.4 percent through the end of 2018. As restaurants vie to attract and retain staff,  they are offering wages above those required by minimum wage laws, even as states and cities across the country raise the bar. Many are also looking to create a work culture that will result in lower turnover through more predictive scheduling that can nurture a better work/life balance, benefits like parental leave, and training and rewards programs. Noodles & Company and Yum! brands, which owns Taco Bell, Kentucky Fried Chicken, and Pizza Hut, notably have implemented parental leave policies that are considered generous for the restaurant industry.

What’s Next for Restaurants?

Amid rising labor costs, changing consumer preferences, and new forms of competition from non-traditional entrants like Whole Foods and Wawa, restaurants are reevaluating their business strategies, honing their core purpose and vision, and deploying solutions to boost loyalty and brand awareness.

The beginning of 2019, for example, has seen restaurants roll out delivery services and adopt widespread digital capabilities, making it easier for customers to interact with them. Pivoting to meet shifts in where consumers want to eat, restaurants are rebranding and ramping up marketing efforts to both meet customers at home and drive traffic in house. Potbelly grew its off-premise business by 2.2 percent last year and is offering delivery and catering at all of its shops, and Fiesta Restaurant Group has struck a partnership with DoorDash for delivery at all locations. Under the helm of CEO Brian Niccol, former CEO of Taco Bell, Chipotle, which saw same-store sales rise 4 percent for 2018, plans to emphasize mobile and digital ordering and delivery and is equipping certain locations with a second make line dedicated to fulfilling digital orders.

As 2019 is unlikely to see a release of industry pressures—restaurants expect wage and commodity inflation to persist, and rivalry from peers and nontraditional competitors to intensify—the mandate is to do more with less. In the first few months of 2019, same-store sales across the industry continued to see slight growth, due largely to menu price increases as traffic counts remain down.  We expect restaurants will continue evaluating what is and isn’t working and contemplate changes to their core strategies, resulting in more rebranding, marketing, and digital investments. While that is a major part of a successful strategy transformation, getting stakeholder buy-in—from corporate employees to the servers on the restaurant floor—is just as important. Restaurant owners need to make sure everyone on the team understands what the mission is and how they can execute accordingly. 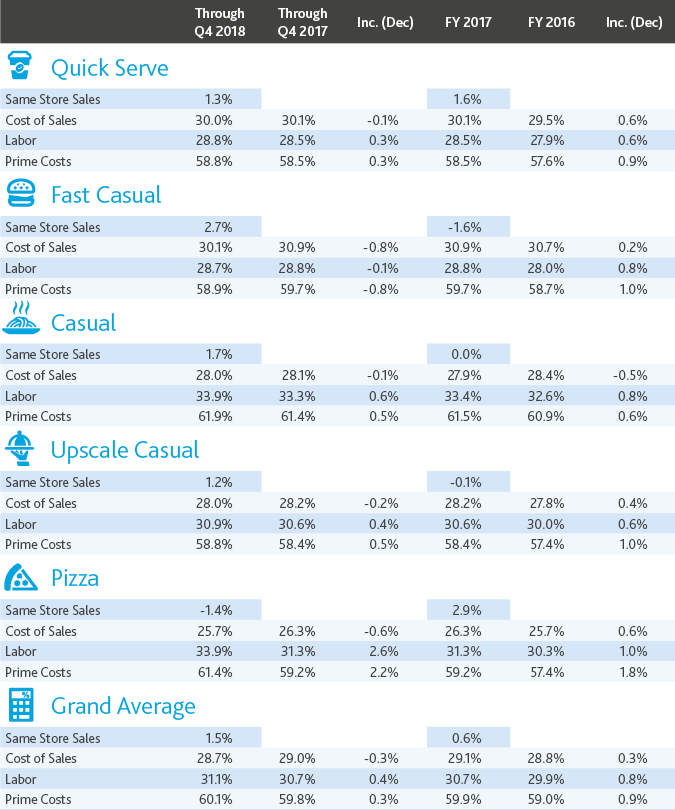