However, restaurants should not rely too heavily on this renewed economic optimism for sales growth. While media reports boasted record spending at restaurants, many of these stories overlooked a key nuance in the industry’s current state: While restaurants overall experienced growth in Q2, heightened consumer spending hasn’t necessarily distributed evenly amongst restaurants. Many markets across the country are becoming saturated with chain and independent restaurants, meaning consumers have more options than ever, but restaurants simultaneously face a growing list of competitors. Restaurants that struggle to capture this spending amid evolving market dynamics may face larger hurdles than simply keeping up with the latest trends.

For franchisors, over-saturation has yet to pose as big of a problem. Quick service, fast casual and even casual franchises continue to expand into new markets, particularly in rural areas. Since less-populated markets often present less competition compared to urban areas, franchised restaurants are able to quickly capture rural markets’ spending as recognizable name brands.

While traffic declined 1 percent in Q2, according to Nation’s Restaurant News, restaurants fared relatively better compared to the 2.3 percent traffic decline in Q1. Delivery continues to capture more spending, but this slight traffic increase is encouraging for restaurants that rely on in-store business. 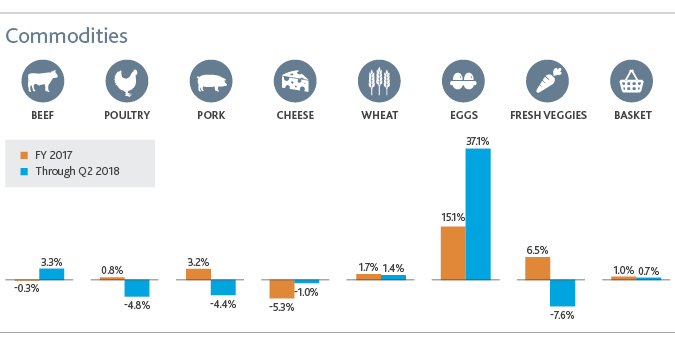 Through June, beef and wheat prices rose 3.3 percent and 1.4 percent, respectively. At the same time, poultry prices dipped 4.8 percent, pork prices dropped 4.4 percent and fresh veggie costs decreased 7.6 percent. Cheese costs also declined by 1 percent, a positive for pizza restaurants and others that incorporate cheese into a good portion of their menu options. Egg prices also spiked 37.1 percent in the second quarter. As noted in our previous benchmarking report, this figure points to egg price stabilization rather than volatility considering egg prices’ extreme cost decline in 2016.

Various states’ minimum wage hikes, combined with high turnover rates, led to a continued labor cost incline across the industry of 0.4 percent over Q2 2018. This is consistent with the past several years’ changes in labor costs, as regulatory, wage and employment shifts shake out across the country. As restaurants grapple with high turnover rates, strategic tech investments will help restaurants manage pressure in the labor market.

What’s Next for Restaurants

While restaurants continue to work through the ripple effects of tax reform, a few key issues stand at the industry’s horizon.

First, several significant M&A deals may materialize in the coming months, including an ongoing bid for Yum Brands, which operates KFC, Taco Bell and Pizza Hut. Private investors continue to turn to the restaurant industry because of the investment class’s relatively low post-acquisition general and administrative expenses. Therefore, efficient operators find it fairly easy to expand their restaurant portfolio and boost their bottom lines without adding more overhead costs. Private equity, loaded with dry powder, may also take a note from venture capital and soon deploy more capital in the restaurant tech space.

Separately, while the effects of both Chinese tariffs and increased trade tensions remain to be seen, restaurants should keep a close eye on how these trade shifts will impact commodity prices.

Going forward, a strong economy will continue to help strengthen consumer spending at restaurants, yet each business will need to successfully capture these dollars amid increased competition. Strategic delivery and tech investments, promotions, and measured expansion plans are just a few of the measures restaurants can take to sustain growth, and even stand above the crowd. 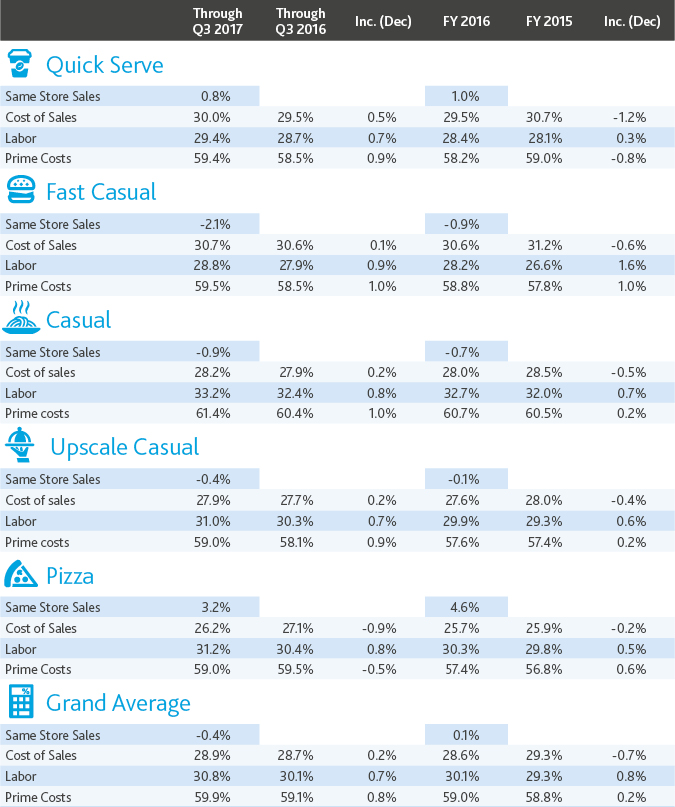