Throughout the first quarter of 2018, same-store sales across the restaurant landscape rose at a slim but vital 0.9 percent. The first quarter’s growth brought a healthy bout of optimism to an industry grappling with heightened competition for restaurant-goers’ business, as overall FY17 sales remained flat. Mild weather largely drove this uptick, with restaurant traffic climbing as winter storms occurred less frequently than usual. Restaurants in major Northeastern cities, however, were forced to close stores during the winter’s several Nor’easters. Despite this, quick serve, fast casual, casual, and pizza restaurants’ same-store sales all increased through Q1, with only upscale casual reporting a loss.

As this quarter’s segment-specific data reveals, the success of each restaurant segment fluctuates, and independent restaurants are seemingly performing better than chains. Consumers’ evolving preferences, from delivery to health food, promises uncertainty for the industry’s foreseeable future.

Bloomin’ Brands, which owns Outback Steakhouse, beat expectations this first quarter after reporting the highest sales increase, 6.5 percent, among casual restaurants. Overall, the segment reported 1.5 percent growth, with Famous Dave’s, Applebee’s, BJ’s Restaurants, and Denny’s posting solid gains. Casual restaurant brands such as Outback Steakhouse promise classic menu options like steak at affordable prices, which appeal to consumers who cannot or will not spend upwards of $60 on a meal. Yet casual restaurants also run the risk of losing customer demographics like millennials, who often rate restaurants’ relevancy based on their trendiness, quality of ingredients, and delivery services. Maintaining a strong, diverse customer base may prove challenging for casual restaurants that don’t adapt quickly enough to the industry’s shifting standards.

In the pizza market, Domino’s continued to outperform its competitors, reporting a 6.4 percent increase through Q1. Meanwhile, Pizza Hut’s recent  trial of beer delivery services helped lift sales by 1 percent. Papa John’s, however, reported a 6.1 percent loss as the company endeavors to renovate stores and upgrade its delivery capabilities. Notably, the restaurant ended its longstanding sponsorship of the National Football League in February, which may present challenges going forward. As a whole, rising cheese prices caused the pizza segment to grow 0.4 percent, a more modest gain than previous quarters.

Upscale casual was the sole segment to experience an overall decline in sales during the first quarter, reporting a -0.5 percent dip. On the plus side, Maggiano’s Little Italy, The Cheesecake Factory, The Yard House, and Eddie V’s all reported positive sales results, while Stoney River Steakhouse & Grill’s 6.2 percent increase stood above all its upscale casual competitors. On the other hand, Sullivan’s Steakhouse reported the most significant downturn at -10.3 percent, a further reflection of restaurant goers’ heightened appetite for innovative dining experiences over chains’ staple offerings. 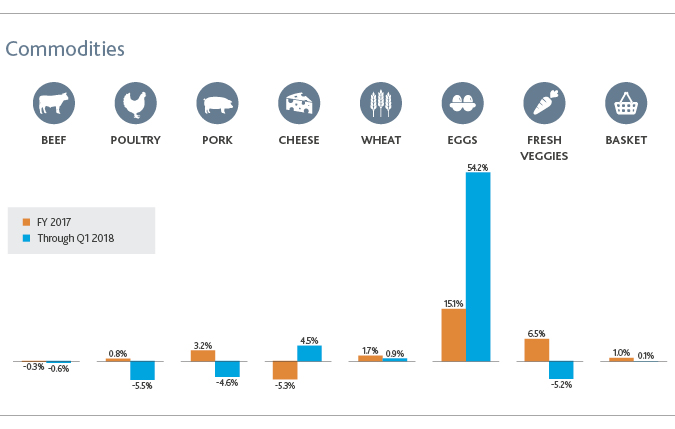 Eggs dominated the industry’s attention this quarter, as prices spiked 54.2 percent through the first few months of 2018. However, this increase comes well after the 51 percent price drop in 2016, suggesting that prices are leveling, not skyrocketing. Cheese prices were also up 4.5 percent as the dairy market grapples with competition from plant-based dairy alternatives. Restaurants that heavily source fresh produce for their menus lucked out in the first quarter, as fresh vegetable prices were down 5.2 percent.

Labor costs continue to rise as workers push for higher minimum wages in their states and national employment levels climb. Across restaurant segments, labor costs rose 0.3 percent over Q1 2017. Changes in the workforce structure are making it harder for restaurants to find and retain good talent. Fewer high schoolers are joining the service industry, instead turning to unpaid internships to kickstart their careers. As a result, employers are forced to compete by offering higher salaries and other incentives.

At the same time, new technologies are shifting the role of restaurant employees, and many are performing less repetitive tasks as machines automate the ordering process and beyond. Restaurants will likely start investing in more technology and foodservice equipment that allows staff members to use a more diverse set of skills without compromising food quality or food safety.

In the months to come, restaurants will navigate persisting industry disruption caused by overall market saturation, competitive delivery services, new menu standards, and both front of house and back of house technological innovations. Businesses that can balance dine-in and delivery, the changing workforce, and listen to consumers’ desires will survive and even thrive.

The restaurant industry’s progress in Q1 underlines the importance of embracing change. Going forward, restaurant owners have substantial challenges to traverse, but those who choose to adapt to the industry’s new standards stand to reap immense rewards.