Overall, private equity firm partners surveyed expect the Trump administration to have a favorable effect on the environment for private equity, with 42 percent saying the new government could increase investor interest in the asset class and only nine percent believing the contrary.

However, tax reform proposals bring a major caveat, with 57 percent of private equity fund managers describing them as the national policy issue that is having the greatest impact on their firm’s investment strategy.

As expected, when asked about the tax reform proposals anticipated to have the greatest negative effects on private equity, fund managers point to carried interest being taxed as ordinary income rather than as capital gains (48 percent) and the elimination of interest rate deductibility (44 percent). Versions of both these provisions are included in the tax reform bills that was signed into law on December 22.

Regarding interest rate deductibility, until now, private equity firms were able to deduct 100 percent of their interest payments on corporate debt. The new tax regime caps interest deduction to the sum of business interest income plus 30 percent of the adjusted taxable income of the taxpayer for the taxable year. Adjusted taxable income is defined similar to EBITDA for taxable years beginning after Dec. 31, 2017 and before Jan. 1, 2022, and is defined similar to EBIT for taxable years beginning after Dec. 31, 2021. Limitation applies to both related party and unrelated party debt. Disallowed interest is carried forward indefinitely. For a highly-levered industry like private equity, limiting interest rate deductibility could lead firms to reduce their issuance of debt and change the way they finance acquisitions.

This is likely to encourage firms to shift towards using more equity to finance deals, exacerbating the decrease in returns on investment, which is already being hurt by high acquisition multiples.

But private equity holding periods are getting longer. The percentage of fund managers holding on to investments for an average of four to five years has grown from 32 percent in 2016 to 33 percent in 2017; those with hold periods averaging five to six years has gone from 22 percent to 28 percent; and those with hold periods of six to seven years have grown from 11 percent to 13 percent.

The trend should continue in 2018, with 51 percent of fund managers expecting to extend holding periods. 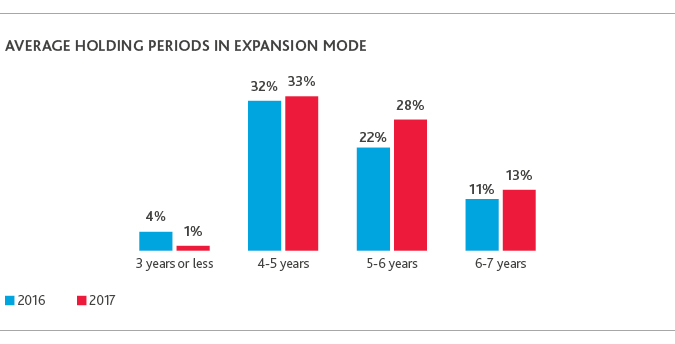 If private equity firms could write up a tax reform wish list, the first items on their list would be income tax simplification and a lower corporate income tax, with 32 percent of respondents choosing both. Meanwhile, 26 percent would add lower tax rates for partnerships and seven percent would ask for lower capital repatriation rates.

Private equity firms did end up getting some of the items on their wish lists.

For instance, the corporate tax rate—was cut from 35 percent to 21 percent, effective for taxable years after Dec. 31, 2017.

In addition, the bill that was signed into law includes a dividend exemption system in which certain U.S. corporate shareholders would be entitled to a 100% dividends-received deduction for dividends received from certain foreign corporations, essentially exempting such dividend from U.S. tax. Non-corporate taxpayers however would not be entitled to such an exemption.

“With a lower repatriation rate, strategics should have an incentive to pull cash from foreign subsidiaries and pay higher multiples for deals in the U.S., leaving private equity firms at a disadvantage.”

Deregulation and Protectionist Measures on the Horizon

There are other policy issues that are keeping some private equity firms from getting deals done. For 27 percent of private equity fund managers, international tensions such as the rhetoric between the U.S. and North Korea and turmoil in the Middle East are causes for concern. NAFTA renegotiations, and talk of protectionist measures, also bring pause to 23 percent of respondents.

“Heading into 2018 the new centralized partnership regime rules under the Bipartisan Budget Act open the door for substantial risk for private equity firms as they could unknowingly take on the exposure for imputed tax liabilities of companies they acquire."