Planting the Seeds for Portfolio Growth

Portfolio management brings a whole other set of challenges to contend with. For instance, 37 percent of fund managers note that identifying and retaining skilled management teams is the top challenge, followed by finding growth opportunities (28 percent), changing outdated processes (23 percent) and dealing with a poor economic environment (nine percent).

To ensure portfolio company growth amid an environment of uncertainty, 94 percent of fund managers expect to invest in human capital, 90 percent will diversify products and offerings, 82 percent will implement digital transformation initiatives, 81 percent plan to cut costs, 77 percent will evaluate cybersecurity risks, and another 77 percent will adjust geographic footprints.

As firms evaluate their geographic footprints, the majority appear poised to remain stateside. Only 26 percent of fund managers plan to increase cross-border deals in 2018–down from 38 percent from what was expected in 2017—and 69 percent foresee that less than 10 percent of their funds will invest internationally. Those that do plan on investing outside of North America are most likely to look for deals in Western Europe (37 percent), followed by Asia and Southeast Asia (30 percent), South and Central America (17 percent), the Middle East and Africa (11 percent) and Eastern Europe and Russia (five percent).

Private equity firms are also willing to take on more leverage, or at least they were before the tax reform bill was signed into law. While 44 percent of fund managers were not planning on raising more debt, the remaining 56 percent did plan to raise debt over the next 12 months to refinance portfolio companies’ existing debt, take dividend recaps and finance operational improvements. 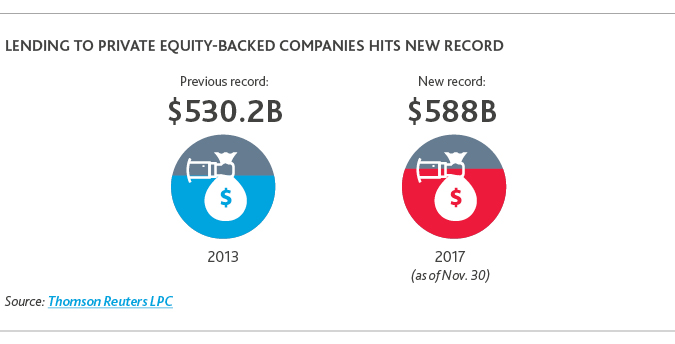 It’s a Sellers’ Market, but Where Are the Buyers?

A high-valuation environment would automatically be expected to drive sellers to the market. But the gap between buyers’ and sellers’ price expectations is putting a bit of a damper on hopes for abundant exit opportunities, according to 77 percent of private equity fund managers.

Exits are on a declining trend. According to PitchBook data, private equity exits continued their downward trend with $40.8 billion in value exited across 224 companies during the third quarter of 2017—a 20 percent drop in deal volume from the previous quarter.

This trend is likely to continue. In fact, only 13 percent of respondents expect deal flow over the next 12 months to be related to exits—likely because buyers are wary of overpaying.

But if sellers were to have their way, they would prefer to sell to strategics. The survey showed that respondents believe the exit types that will provide the best returns in the next 12 months will be sales to strategics (68 percent), followed by sales to private equity peers (19 percent), with initial public offerings (IPOs) coming in last with only two percent of respondents favoring them in the current environment.

When private equity firms are preparing to exit an investment, they are increasingly employing sell-side due diligence to proactively uncover and address any surprises that could impede the sale. Nearly half of fund managers (49 percent) say they employ a third party to perform sell-side due diligence on a “moderate” basis, while 24 percent do their own due diligence and do not hire outside vendors.

When a firm has an exit opportunity, other obstacles can pop up in the middle of the due diligence process. At the top of that list are cybersecurity vulnerabilities, according to the survey.

But being that data breaches at large companies make headlines more and more often, companies of all sizes are now aware of the importance of defending against possible hacks.

In fact, only eight percent of fund managers say cybersecurity due diligence is not important to them, while the remaining 92 percent say the opposite.

Overall, the private equity industry has continued growing despite the headwinds. A scenario of potentially softer returns will likely push firms to come up with innovative ways to make their portfolio companies’ operations more agile and efficient.

At the onset of 2018, the influx of capital into private equity shows little signs of slowing, and it looks like firms’ will continue to have the blessing of institutional investors. The fund managers that keep their sights on achieving steady returns in an overheated market are the players that will, in the long run, eclipse their peers paying inflated prices just to put cash to work.

“We have heard that institutional investors plan to continue allocating capital to private equity, even if holding periods are getting longer and returns could see somewhat of a dip. That really speaks to the strength of the asset class, especially as it enters a maturity phase.”