Valuation of banks and insurers in times of COVID-19

Valuation of banks and insurers in times of COVID-19

COVID-19 – Milestones of an Unprecedented Crisis

Valuation of banks and insurers in times of covid-19 – introduction

Countries across the globe instituted lockdown measures to reduce the spread of COVID-19, the novel coronavirus. From the economic perspective, these measures have had a disruptive impact on all organizations, including banks and insurers. While authorities have taken steps to mitigate the worst effects of the pandemic, the risks persist.

In terms of an outlook, much depends on (a) how long the period of COVID-19 disruption lasts, and (b) the degree of further government response. The first point is unknown at this stage. However, we have seen myriad government responses announced or implemented to mitigate the effects of the crisis, including tax payment deferrals, debt moratoria and credit guarantees. In addition, central banks have cut interest rates—for example the Fed’s emergency rate cuts in March 2020—thereby reducing the cost of short-term borrowing.

Not all financial institutions will experience the COVID-19 impact in the same way. Some are better positioned than others. A few banking segments even benefited from COVID-19. For example, debt and equity underwriting performed well and trading income was strong during the market turmoil in March 2020. On the other hand HSBC, to name just one example, reported financial results for Q1 2020 with profits almost halved on increased loan loss provisions due to COVID-19.

We think this is not about ‘weathering the crisis’. Quite to the opposite, banks and insurers have to find strategic answers to a once-in-a-generation structural change. To assess the initial impact (as at the end of April 2020), we have designed a study that explores how COVID-19 has affected market valuations. Our computation is based on a group of international banks and insurers domiciled in the U.S. and in Europe. We start by defining milestones on which we measure the market valuation. 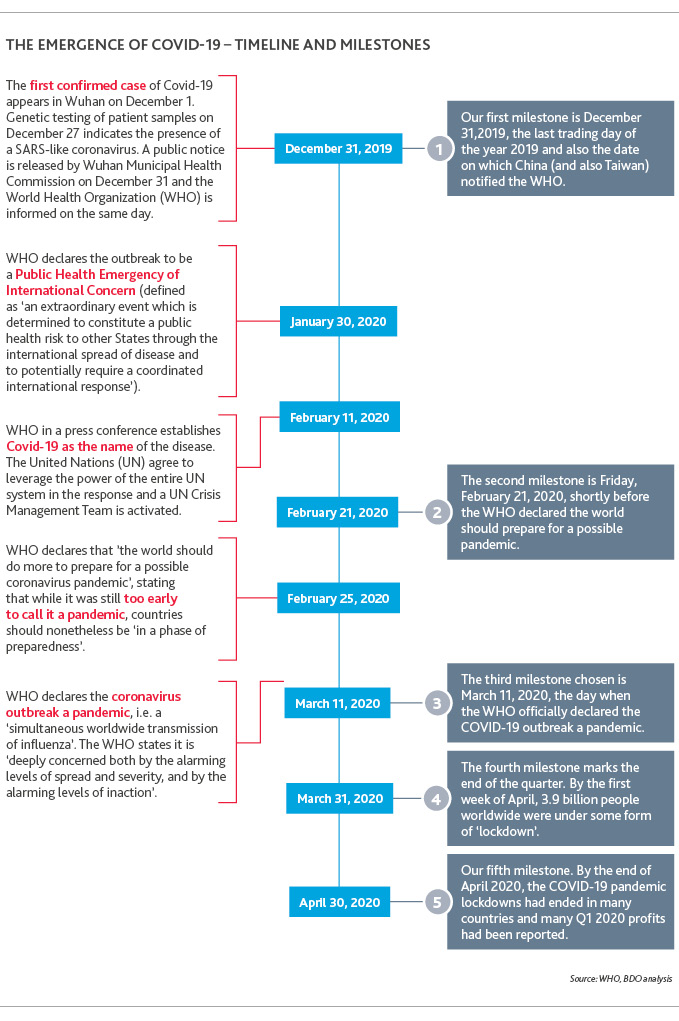 How Were Valuation Measures Impacted During The Crisis? 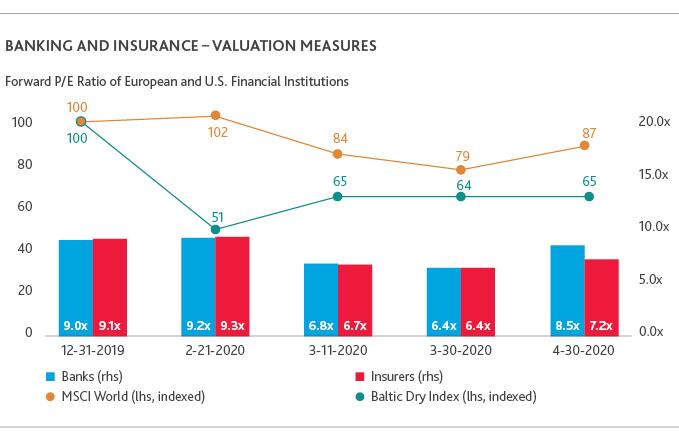 As at the date of the five milestones introduced on the previous slide, we calculate the 2021 price-earnings (P/E) forward multiples. While the price (P) is based on the market capitalization at the respective date, the FY 2021 forward earnings (E) are based on analysts’ consensus view.

To provide for a more comprehensive picture, we include the MSCI World Index as well as the Baltic Dry Index, the economic indicator issued daily by the London-based Baltic Exchange that provides an assessment of the price of moving the major raw materials by sea globally. For the purpose of illustration, both indices (as well as other stock market indices presented in this paper) are indexed to December 31, 2019 = 100.

In contrast, the market values of the insurers group measured by P/E ratios recovered to only 78% of the December 2019 level (7.2x versus 9.1x). Is the value of insurers hit more substantially by COVID-19? We will elaborate on this question in more detail on the next slide.

Our peer group consists of 20 international banks and insurers domiciled in Europe and in the U.S. and assembled into four groups by means of calculating the median of FY 2021 forward P/E ratios:

U.S. banks’ results for Q1 2020 provided a first glimpse of the heavy impact of the COVID-19-induced recession on the banking sector.

According to DB Research, the seven largest U.S. institutions reported a drop in net income of 58% year-over-year. Whereas all banks remained profitable, credit loss provisions rose to $26 billion, 4½ times the level at the end of Q1 2019.

In many segments, business deteriorated, including lower M&A advisory and asset management fees as well as pressure on net interest income. The latter had already been visible for some time since the Fed started cutting rates in summer 2019. In addition, some banks took write-downs on securities and short-term bridge loans.

However, debt and equity underwriting performed well and trading income during the market turmoil in March 2020 was strong.

Initial Value Impact In The U.S. And In Europe Compared 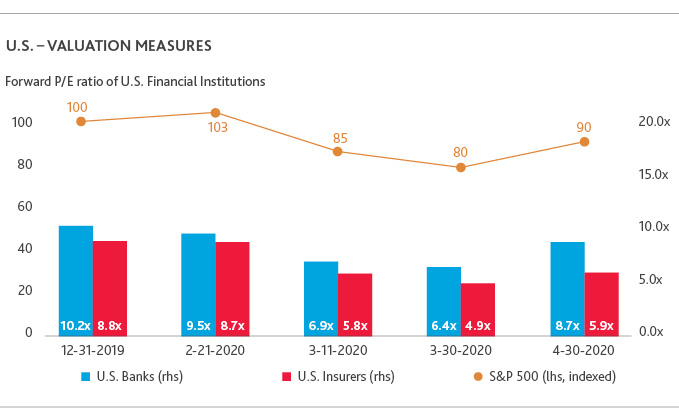 In the coming months, the negative effects of a recession are expected to materialize in the real economy, while mitigating factors, including debt moratoria and credit guarantees, might partly disappear. Volatility and trading volumes will most likely return to a normal level and investment banking business will lack the trading profit that helped the large U.S. banks in March. The Fed’s March emergency rate cuts will most likely affect the banks’ interest margins. Even more important, U.S. banks will need to watch rating migration and the impact credit losses will have on their RWA and capital ratios. Overall, our analysis shows some pronounced differences between the U.S. and Europe regarding the COVID-19 valuation impact, especially a stronger and faster recovery of U.S. banks.

U.S. insurers will need to closely monitor solvency ratios in order to meet economic, regulatory and rating agency capital requirements. The volatility and falling interest rates within the financial markets will likely impact life insurance the most, while many insurers have introduced exclusion clauses for epidemics/pandemics into their non-life policies. The latter may apply to business interruption. Lines of business potentially affected include trade credit and workers’ comp. Also, event cancellations may cause greater losses to insurers as a few large events have policies that may cover them even for pandemics. Finally, health insurance will be affected by COVID-19, as healthcare is privately provided in the U.S. (except for Medicare for the elderly and for people with disability status). After COVID-19, many carriers are expected to increase rates and deductibles while limiting coverage. 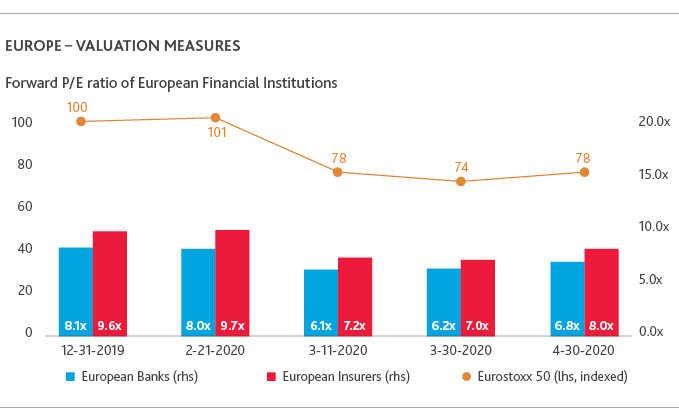 Unlike their U.S. peers, the large European banks are not focused on investment banking/trading income. They are more active in traditional commercial banking which is intensely exposed to COVID-19 with its focus on the real economy. The lending business of European banks typically has a lower risk intensity than U.S. banks, due to a business model with low-risk mortgages, resulting in lower RWA relative to total assets. An increase in risk during a recession might therefore lead to a higher vulnerability of European banks compared to U.S. banks. Furthermore, major European banks use internal risk models and calculate capital ratios under the Basel III advanced approach, also typically leading to lower RWA. As a consequence for major European banks, a larger CET1 reduction has to be expected in times of a crisis of the real economy.

For European non-life and life insurance, we refer to the outlook for U.S. insurers. Furthermore, in contrast to the U.S., healthcare insurance will most likely not be much affected due to public provision in most European countries.

EIOPA, the European Insurance and Occupational Pensions Authority, strongly encourages insurers to consider practical implications of COVID-19 for the day-to-day activities of consumers, in particular with regard to the social distancing and self-isolation. Specifically, EIOPA asked European insurers on April 1, 2020 to consider the interests of consumers and exercise flexibility in how they are treated, where reasonable and practicable.