More than a year into tax reform legislation known as the Tax Cuts and Jobs Act of 2017, corporate board members report that their company saw the most impact from the reduced corporate tax rate. Other provisions, including those related to foreign earnings and interest expense deductions, had more muted effects.

However, each provision’s level of impact also varied depending on the size of the company. Only half of all micro/nano cap companies felt the effects of any tax reform changes, compared to 83% of larger companies.

While nearly half of directors (47%) claim their organizations did not take specific action as a result of tax reform, the companies that were motivated to act on changes to their tax position pursued diverse activities, marking a shift from our 2018 survey findings: 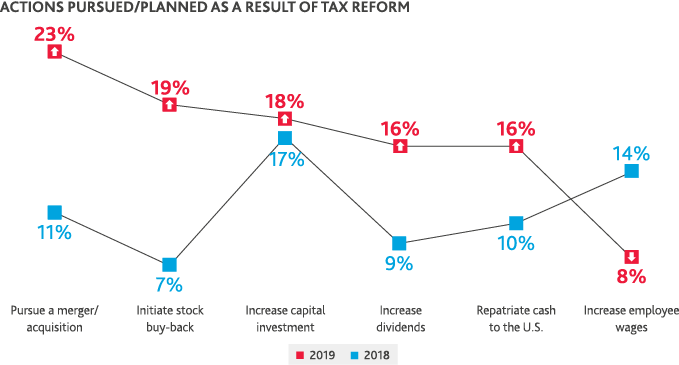 Six percent of directors in our 2019 survey indicated their companies additionally distributed a one-time bonus to employees.

Tax reform is only one of the major regulatory changes that companies have been contending with. 2018’s South Dakota v. Wayfair decision, which held that states could collect sales tax from businesses even if they don’t have a physical presence in the state, marked the most significant Supreme Court state tax decision in decades. Companies are still contending with the fallout, assessing exposure and seeking to understand nexus standards by state in order to comply.

Given the sweeping changes to tax law happening at the federal, state and local levels, it’s more important than ever for companies to have a grasp on their total tax liability—the sum amount of all taxes owed, factoring in income, indirect, property, payroll, excise and other taxes as well as credits, incentives, customs, duties and deductions. Boards play a critical oversight role on tax compliance and liability by ensuring that management is appropriately mitigating risk and maximizing opportunities. Almost two-thirds of directors (65%) report a high or moderate understanding of their company’s total tax liability. For the remaining directors with low or no understanding of total tax liability, now is an ideal time to proactively seek additional insight into the company’s tax positioning through more engagement with management and tax advisors. 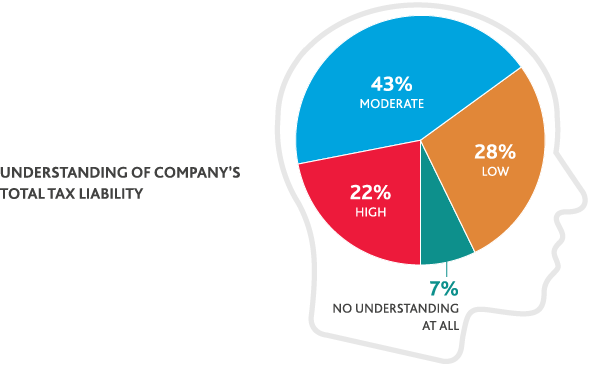 Consistent with prior years, the annual AICPA & CIMA Conference on Current SEC and PCAOB Developments was held in Washington D.C. on December 12-14, 2022, where representatives from the Securities and Exchange Commission and the Public Company Accounting Oversight Board shared their views on various accounting, reporting and auditing issues.

BDO was a corporate sponsor of and active participant in several leading governance summits held in the fall of 2022 including the Association of Audit Committee Members Inc., Corporate Board Member and the National Association of Corporate Directors. The following reflects key priorities and considerations as we head into 2023 identified based on our discussions with corporate director attendees, subject matter experts and other related relevant research and thought leadership.