Initial public offering (IPO) activity on U.S. exchanges was a bit of a rollercoaster ride in 2017, beginning slowly in the first quarter of the year before building to a frenzy of offerings in the Spring. That was followed by a relatively calm summer, prior to a flurry of activity in the fall to close out the year. In the end, by any measure, 2017 was a positive year for IPOs with virtually every statistical category – offerings (+52%), proceeds (+89%) and filings (+59%) – up significantly from 2016.*

According to the 2018 BDO IPO Outlook, BDO USA’s annual survey of capital markets executives at leading investment banks, there were multiple factors for the increase in offerings. When asked to identify the primary factor behind the jump in IPOs, an increased confidence in the U.S. economy (38%) is most often cited. Other drivers identified by the bankers were positive IPO performance encouraging additional offerings (18%), pro-business climate of the Trump administration and Republican-controlled Congress (18%), continued low interest rates pushing demand for higher yielding assets (13%) and increased investor cash flow into stockfocused
mutual funds (13%). 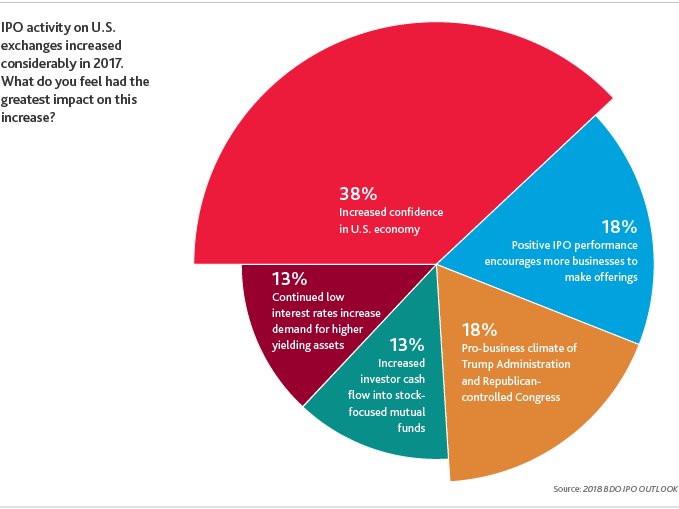 In last year’s BDO IPO Outlook survey, more than two-thirds (68%) of the capital markets community indicated that they felt President-elect Trump and the Republican-controlled Congress would have a positive impact on the U.S. IPO market.

"In 2017, the U.S. IPO market bounced back from two consecutive years of dwindling offerings and proceeds raised. Capital markets executives clearly feel that the growth of the past year will continue in 2018 as they project significant increases in both the number of IPOs and in total proceeds raised,” said Christopher Tower, a Partner in the Capital Markets Practice of BDO USA. “Given the strong performance of last year’s offerings, the overall strength of the economy and low volatility in the greater stock market, many factors appear to be in place for a healthy IPO market in the coming year.”

Looking forward, the capital markets community is projecting significant growth in the number of initial public offerings (IPOs) on U.S. exchanges in 2018. Close to three-quarters (72%) predict an increase in the number of U.S. IPOs in the coming year, with eighteen percent describing the increase as substantial. One-fifth (20%) forecast activity as staying about the same as 2017, while just 8 percent are projecting a decrease in offerings.

Overall, bankers predict an 11 percent increase in the number of U.S. IPOs in 2018. They anticipate these offerings will average $260 million, which projects to $46 billion in total IPO proceeds on U.S. exchanges. This would represent an increase of 30 percent from 2017 proceeds.

When asked for the most likely factor to spur increased IPO activity in 2018, 38 percent of the bankers cite continued positive returns from new offerings. Other potential drivers identified by the executives are a positive impact from meaningful tax reform (23%), the pricing of a major “name” offering (18%), continued regulatory rollbacks under the Trump administration (15%) and less favorable private valuations forcing businesses to the public markets (6%).

Dropbox, Ancestry.com, Lyft, Pinterest and Spotify are just a few of the intriguing businesses considering a potential offering in 2018.

For the fifth consecutive year, the healthcare industry was the bellwether of the U.S. IPO market – spawning 29 percent of total U.S. offerings in 2017 – and most capital markets executives are projecting even more IPOs in the healthcare sector in 2018. Overall, a majority of bankers are forecasting increases in IPOs from the technology (89%), biotech (71%) and healthcare (60%) industries. In addition, close to half of the executives also project an increase in offerings in the financial (45%) sector. (see chart below).

“A strength of last year’s IPO market was the wide breadth of industries represented among the offerings, with six sectors achieving double digits in deals,” said Ted Vaughan, Partner in the Capital Markets Practice of BDO USA. “Healthcare, biotech, technology and financial industries led the way in IPOs in 2017 and the capital markets community believes those sectors will continue to lead the way in the new year.”

Private equity (40%) and venture capital (37%) portfolios are the most often mentioned sources of IPOs in the coming year. Spinoffs/divestitures (14%) and owner-managed, privately-held businesses (9%) are the other sources identified by the bankers.

When asked what offering attribute will be most valued by the investment community in 2018, three-quarters of the bankers cite either long-term growth potential (43%) or innovative businesses offerings/products (32%). Profitability (12%) Stable cash flow (11%), and low debt (2%) are mentioned by smaller proportions of participants. 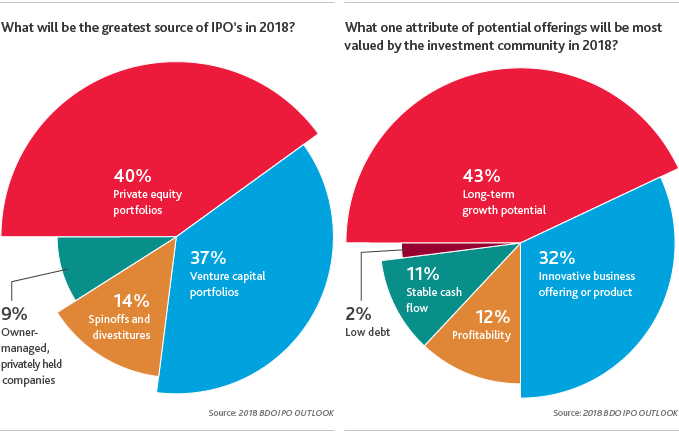 There isn’t one obvious answer when I-bankers are asked to identify the greatest threat to a healthy U.S. IPO market in 2018. Almost one-third (33%) cite global political and economic instability, while just over one-fifth (22%) identify inflated private valuations that will not be supported in public markets.

Smaller percentages of capital markets executives focused on domestic political instability (18%), a failure of the Trump administration to deliver on deregulation (14%) and Federal Reserve rate hikes (13%).​ 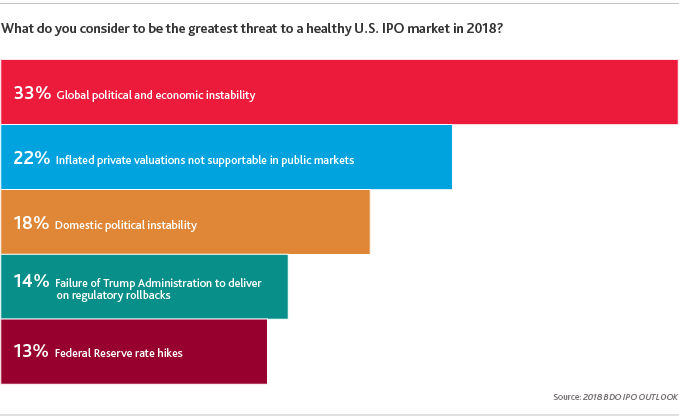 Despite the increase in IPOs on U.S. exchanges in 2017, offerings remain well below the all-time highs of the late 1990s. Some blame excessive SEC disclosure requirements for the drop-off in offerings. In contrast, others contend that there have been numerous changes to ease SEC regulations in recent years - such as the JOBS Act, allowing confidential filings and reducing disclosure requirements - to make it easier to navigate the IPO process.

When asked whether they view SEC regulations as the reason for the historical drop in IPOs from the 1990s, just 24 percent of the capital markets community agreed. A clear majority (76%) were more likely to attribute the reduction in offerings to the wide availability of private financing, high M&A activity, more discerning investors or other factors.

“With an unprecedented level of private capital in the marketplace, the number of private businesses that have conducted numerous financing rounds has increased considerably in recent years,” said Lee Duran, Partner in the Private Equity Practice of BDO USA. “With companies staying private longer, they can mature, become more profitable and more stable prior to going public. Although that slows the timeline to an IPO, in the end, it is a good thing for investors and the economy.” 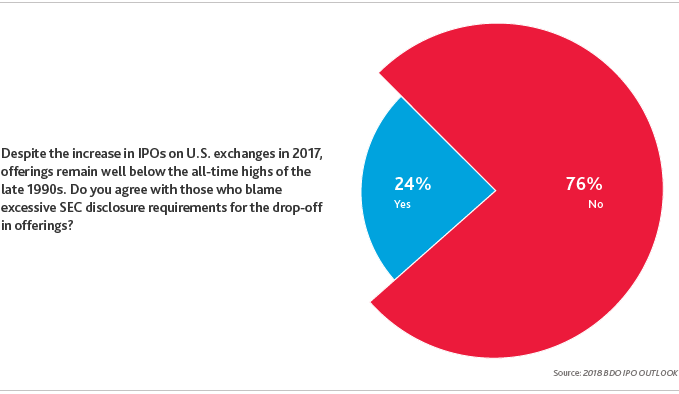 Despite numerous detractors who question its value, Bitcoin, the world’s most prominent cryptocurrency soared in value in 2017. Given this rapid increase, many businesses have begun to use the craze for cryptocurrencies as an opportunity to raise financing through initial coin offerings (ICOs).

Unlike traditional IPOs that give buyers shares or stock options in exchange for purchase, ICOs don’t give buyers any ownership rights in the company. Instead, startups raise money in exchange for a new digital coin that may be traded or grow in value. According to data provider Autonomous Research, companies raised more than $4 billion via ICO fundraising in 2017.

Despite ICOs becoming increasingly common in 2017, with some start-ups raising hundreds of millions in capital, less than one-fifth (19%) of capital markets executives view ICOs as a future threat to traditional IPOs. 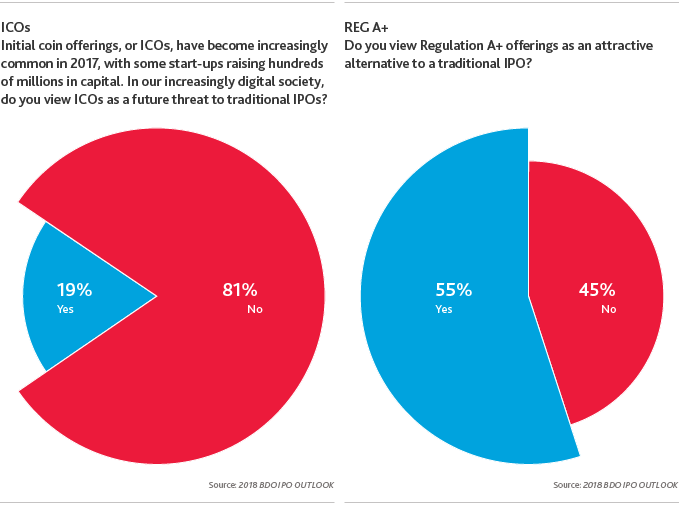 “Given the pioneering nature of ICOs and the inherent volatility of cryptocurrency, there is a wide range of sharply divided opinions on this fundraising practice. Supporters view it as a legitimate disruptive threat that can transform the way companies capitalize themselves, while detractors consider ICOs nothing more than a passing fad,” said Paula Hamric, Partner in BDO USA’s National SEC Practice. “A strong majority of the investment banking community clearly sides with skeptics. As the SEC has recently issued a strong warning on ICOs, investors should proceed with extreme caution”

These findings are from The 2018 BDO IPO Outlook survey, a national telephone survey conducted by Market Measurement, Inc. on behalf of the Capital Markets Practice of BDO USA. Executive interviewers spoke directly to 100 capital markets executives at leading investment banks regarding the market for initial public offerings in the United States in the coming year. The survey, which took place in December of 2017, was conducted within a scientifically developed, pure random sample of the nation’s leading investment banks.

* Renaissance Capital is the source for all historical data related to the number, size and returns
of U.S. IPOs.

GSA's OASIS Plus (OASIS+) Draft RFPs Have Been Released: Are You Prepared?

GSA's OASIS Plus (OASIS+) Draft RFPs Have Been Released: Are You Prepared?

The General Services Administration (GSA) has announced a new contract vehicle which the agency sees as the “next generation Best-in-Class Multi-Agency Contracts (BIC MAC) for complex non-IT services.”

The BDO GovCon Week Ahead - February 2023

The BDO GovCon Week Ahead - February 2023

What Is the Joint Reconciliation Program and How Does It Affect Auditability?

What Is the Joint Reconciliation Program and How Does It Affect Auditability?

You may be familiar with both the Joint Reconciliation Program (JRP) and the Army’s continuing efforts to pass an audit, but did you know they go hand in hand?