Is This The End For The Investment Tax Credit For Solar?

Is This The End For The Investment Tax Credit For Solar?

The solar Investment Tax Credit (ITC) was first introduced as part of the Energy Policy Act of 2005, and it allowed for a federal tax credit of 30 percent of eligible costs to the owner of an installed solar collection installation or solar system. The ITC was originally set to expire at the end of 2006, but the Tax Relief and Health Care Act, which was passed in 2006, extended the ITC for an additional year. During this time frame solar energy began to establish itself as a reliable and economical renewable energy source, evolving from a “gimmick” to a mainstream source of electricity in the U.S. Because of increased installations and the growing strength of the solar industry, the Emergency Economic Stabilization Act of 2008 extended the ITC for an additional eight years. At this point the number of solar installations for commercial scale (approximately 500 kilowatt or greater) really gained traction as a result of both the ITC and the decline of prices for both the components and installations costs.

Starting in 2010 the total capacity of solar installations almost doubled per year through 2013 and during this time utility scale solar systems (1 megawatt and greater) experienced tremendous growth. This growth cooled off from 2014 to 2015 as developers became a little wary of the industry slowing down as the ITC was nearing the end. The Consolidated Appropriations Act of 2015-2016 extended the ITC until the end of 2019, which led to a building boom for solar systems in 2016.

Currently, ITC amounts are scheduled to “step down” in value after December 31, 2019, as indicated in the following table. 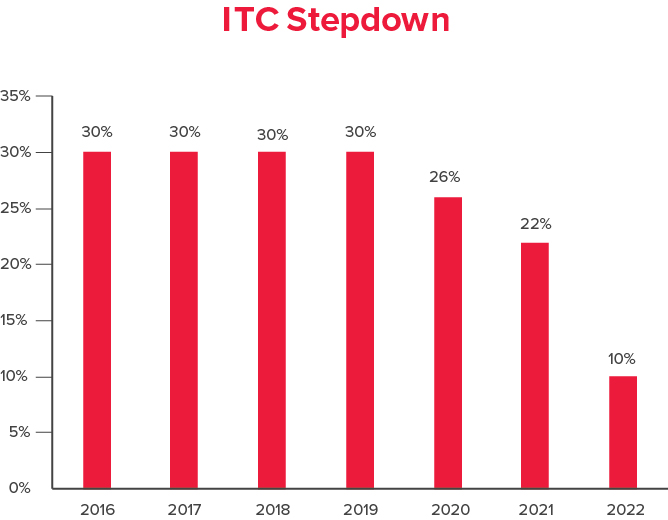 The ITC program has been wildly successful and has directly contributed over $140 billion in private investments and an estimated 10,000 percent growth[1] in solar installations in the U.S. since it was signed into law by President George W. Bush in 2005. The program has continued through the Bush and Obama administrations up to the present.

As previously mentioned, the program for commercial and utility installations scale down from 30 percent of the eligible costs to 26 percent eligible costs starting on January 1, 2020. But what happens to those systems that are under construction but not fully operational as of the end of 2019? To address this situation, the IRS introduced a safe harbor clause in IRS 2018-59 that attempts to explain this situation. Under this clause, an owner can still apply for the full 30 percent ITC amount if the owner “substantially started work” on the system installation and maintains a status of “continuation of effort” to complete the construction of the system to commercial operation. Sticking a shovel in the ground on December 31, 2019, to start construction probably would not qualify. If opting for the safe harbor, the IRS allows up to 48 months after initial construction to have the solar system completed and operational, if you can demonstrate that you have been continuously working on the project to completion. Although this all sounds somewhat ambiguous—and it is—it is recommended that you read IRS 2018-59 to fully understand the necessary criteria that makes a system installation eligible for safe harbor.

One of the key factors to remember is that the ITC is based on “eligible costs” for the installation of a solar system, which includes specific equipment, engineering procurement and construction (EPC) costs, as well as development and finance costs that must be supported with proper documentation. Of these allocated costs, not all are eligible according to the IRS. The following tables list eligible and ineligible costs (italicized items require further explanation to be determined as eligible). 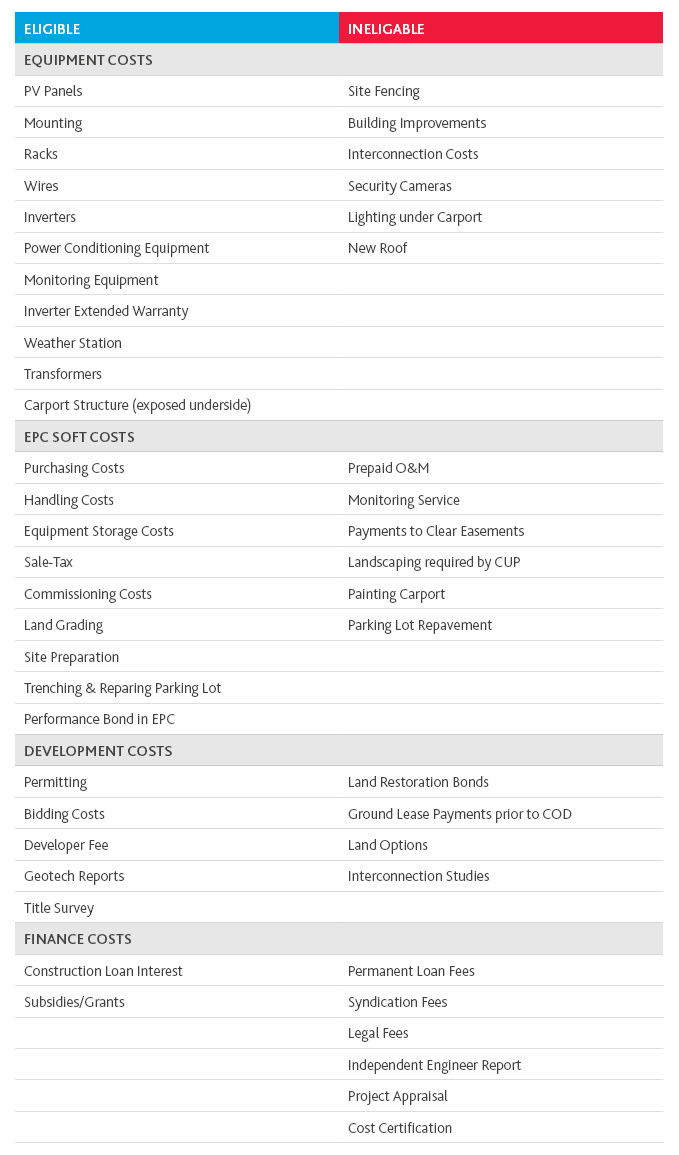 In previous cases where additions were made to an existing building and solar panels were put on the extension, the owner claimed the entire building project as ITC-eligible. The IRS became wise to these situations, and since then the IRS is very specific in defining what is eligible and what isn’t under the ITC program.

Historically, the continued extension of the ITC has led to exceptional growth and broad acceptance of solar energy the U.S., and the idea of extending it once again at 30 percent is gaining steam. The House of Representatives and the Senate both introduced legislation at the end of July 2019 calling for the extension of the ITC program for another five years. Whether this can be accomplished before the end of 2019 is anyone’s guess, but the fact that the ITC program was directly responsible for the rapid growth and acceptance of solar energy in the U.S. is undeniable.

The Inflation Reduction Act (IRA) enacted on August 16, 2022, created a new corporate excise tax on stock repurchases for taxable years beginning after December 31, 2022. On December 27, 2022, the Treasury Department and the Internal Revenue Service issued interim guidance -- Notice 2023-2 -- on the corporate excise tax. The notice addresses time-sensitive issues with the expectation that forthcoming proposed regulations will provide clarity on the statutory provision

The Inflation Reduction Act (IRA) enacted on August 16, 2022, created a new corporate alternative minimum tax (AMT) for taxable years beginning after December 31, 2022. On December 27, 2022, the Treasury Department and the Internal Revenue Service issued interim guidance in the form of Notice 2023-7, addressing how the new corporate AMT applies to partnership interests, consolidated return groups and other significant events that affect corporations, including merger and acquisition activities and excepted cancellation of debt income.