International M&A Deals: Financial Due Diligence Considerations for U.S. Acquirers When Assessing Targets Outside the U.S.

International M&A Deals: Financial Due Diligence Considerations for U.S. Acquirers When Assessing Targets Outside the U.S.

Global M&A value reached $3.3 trillion for the first nine months of 2018. The following highlights the value, volume and average size of deals, listed by location of the target. 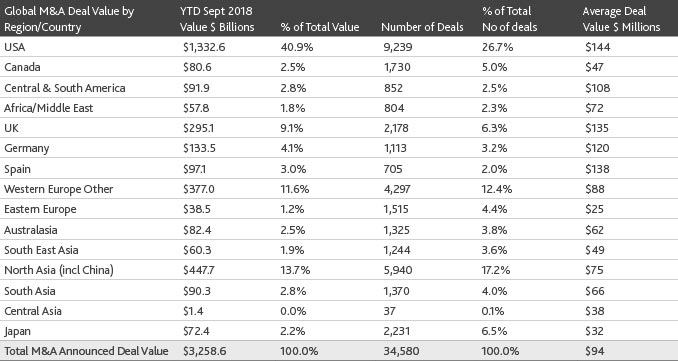 This provides a general perspective on the extent of cross border transactions in the U.S. and Europe during the first three quarters of 2018.

Historically, international and cross border M&A transactions have been dominated by large, multinational corporate acquirers. During 2017, more than 38,000 companies were bought and sold globally, with private equity firms accounting for less than 10% of those deals.

Private equity firms have increased the amount of capital raised in recent years. Total dry powder on hand in September 2018 was estimated at $1.8 trillion[3]. In an effort to deploy that large pool of capital, many private equity funds have focused on winning more large-scale deals and becoming more like a corporate investor “…albeit one that is more efficient and aggressive in all respects. That means using scope and scale deals to add large assets to equally large platforms, capturing synergies and playing the same game as many corporations, only with a higher bar.”[4] Increasingly, that also means pursuing targets located (in whole or in part) outside the United States.

Considerations When Conducting Financial Due Diligence Outside the U.S.

International M&A deals give rise to unique due diligence challenges depending on the country where the target is located. The following are some, but not necessarily all the key considerations:

In summary, the core aspects of financial due diligence in relation to domestic and international transactions are similar. The key focus is on understanding the investment thesis, commercial risks inherent in the business and the transaction, understanding the quality of earnings, free cash flow, working capital, and debt and debt like items of the business. The jurisdiction where the target operates creates additional challenges as outlined above in relation to culture, compliance, employee rights, commercial matters, availability of data, and logistics.