Expected Discontinuation of LIBOR Will Have Transfer Pricing Implications for Taxpayers

Expected Discontinuation of LIBOR Will Have Transfer Pricing Implications for Taxpayers

With the expected discontinuation of the London Interbank Offered Rate (LIBOR) in 2021, there will be transfer pricing implications for which taxpayers can begin planning now. The upcoming changes to LIBOR and the introduction of new reference rates, such as the Secured Overnight Financing Rate (SOFR), will lead to changes in transfer pricing policies for existing and future intercompany lending arrangements. Multinational enterprises (MNEs) are encouraged to review the pricing of intercompany financing, identify instances where an alternative reference rate is required and evaluate the collateral implications of amending existing agreements.

In July 2017, the United Kingdom’s Financial Conduct Authority (FCA) announced that after 2021, international banks will not be required to submit interest rates required to calculate the LIBOR.[1] As a result, the LIBOR, which serves as a globally accepted benchmark for interbank interest rates and is a common base rate for floating rate lending arrangements, will no longer be available.

Since the announcement, several substitutes to the LIBOR have emerged that could potentially serve as replacements. In particular, the United States Federal Reserve Board and the Federal Reserve Bank of New York announced the creation of the Alternative Rates Reference Committee (ARRC) to find an alternative interest rate for U.S. capital markets in 2014. In June 2017, the ARRC announced the launch of the SOFR, which was ultimately introduced in April 2018. SOFR is an interest rate that certain banks use to price U.S.-denominated loans and derivatives. SOFR is published daily by the New York Federal Reserve and is based on the Treasury repurchase market, or repo, where investors offer banks overnight loans backed by Treasury bonds.

IRC Section 1.482 mandates related parties to price intercompany loan arrangements under the arm’s-length standard.[2] In practice, MNEs evaluate the arm’s-length nature of an intercompany interest rate by reference to various market rates, which include fixed and floating rates indexed to the Applicable Federal Rate, the U.S. Prime Rate, LIBOR, or others.

With the phase out of LIBOR, taxpayers may want to consider SOFR as an alternative replacement benchmark for new intercompany financing obligations. A major difference between LIBOR and SOFR is that LIBOR rates are determined using estimated interest rates reported by major banks to the intercontinental exchange (ICE). In contrast, SOFR is a secured interbank overnight interest rate. As a result, SOFR rates are lower than LIBOR rates because SOFR is secured by collateral. The table below shows a comparison between historical LIBOR and SOFR since the introduction of the SOFR in April 2, 2018.[3] 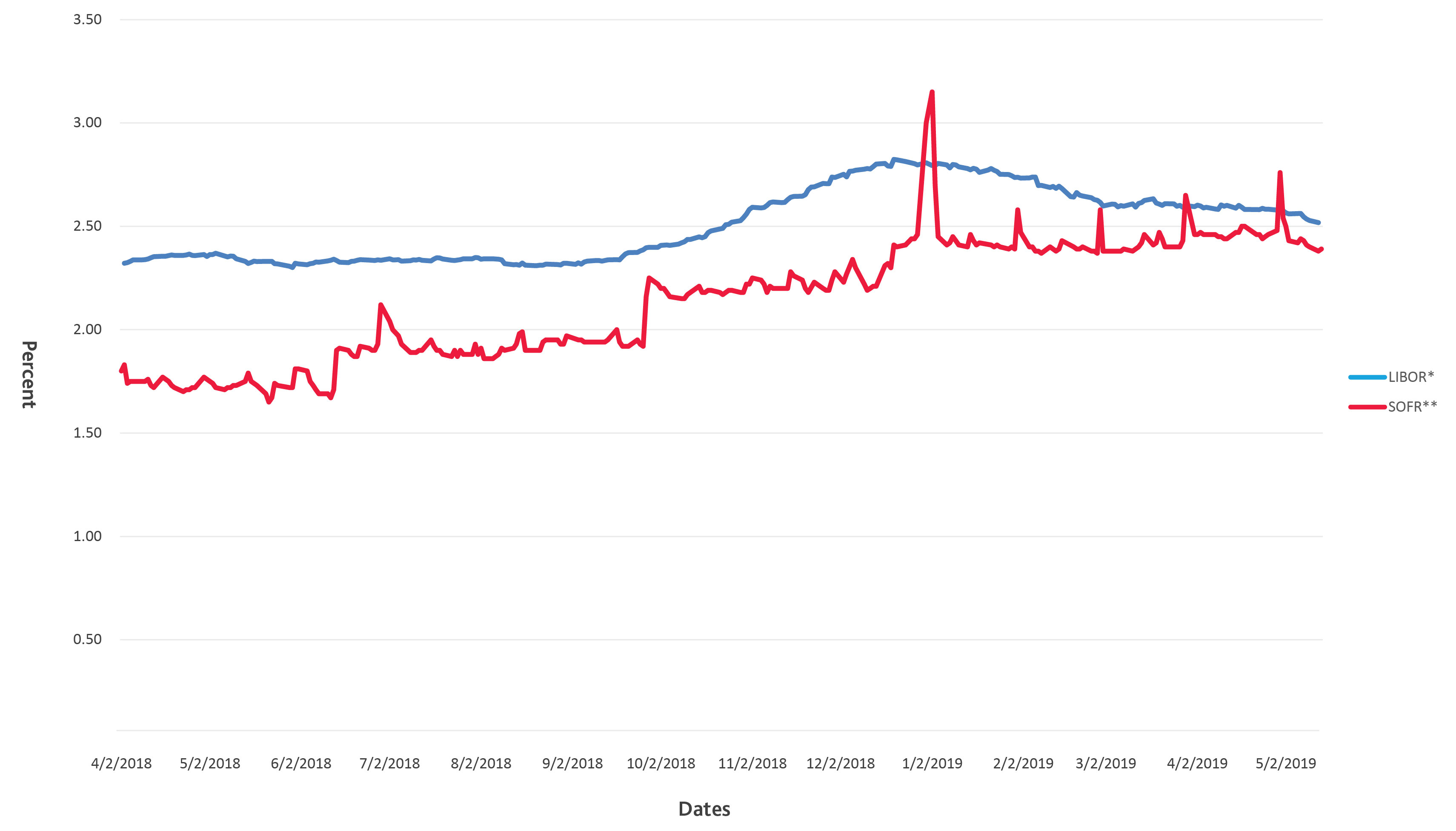 The terms and conditions of the intercompany loan arrangements should be analyzed to determine if SOFR is an appropriate benchmark for an arm’s-length interest rate. Differences in terms and conditions between the LIBOR and the SOFR, or any other base rate, should be addressed and adjustments made to increase comparability. For instance, if the intercompany loan arrangement is not based on collateralized debt, an appropriate adjustment should be considered to increase the comparability of the SOFR market rate of interest.

In addition, for existing loan arrangements, taxpayers will need to examine whether any intercompany agreements that reference LIBOR as a market rate of interest, need to be amended. It is important to note, however, that amending an intercompany loan agreement may be considered a significant modification of the loan and could be characterized as a new loan arrangement. In such cases, under third party circumstances, the lender will likely reevaluate the arrangement in its entirety at the time of the amendment. Consequently, the lender may want to examine the debt capacity of the borrower and ensure that other attributes of the loan are consistent with bona-fide debt arrangements. Similar behavior will be expected in related party dealings.

The transfer pricing impact from the phase out of LIBOR will require monitoring and planning. With LIBOR set to phase out in 2021 and the transition to alternative benchmarks, the changing interest rates may substantially increase or decrease the debt obligations of the borrower and the expected returns of the lender. MNEs with intercompany financing arrangements should be aware of these developments and plan accordingly.

Given the significant changes to interest rates in the prevailing capital markets over the past few years, MNEs will need to identify intercompany loan agreements indexed to LIBOR and develop a transition plan to update or amend the agreements when and if necessary. We highly recommend MNEs to consult with your BDO transfer pricing advisor for further details and analysis.

[1] LIBOR is an index calculated as the average of interest rate estimates submitted each day by major banks in London to ICE, and measures the borrowing costs for large banks operating in the U.K. financial markets.
[2] Certain exceptions apply for intercompany loans that qualify for the application of safe harbor provisions.
[3] Federal Reserve Bank of New York. "Repo Rates Data Historical Search." apps.newyorkfed.org/markets/autorates/rates-search-page?rateType=R3 (accessed May 14, 2019). (accessed May 14, 2019); Federal Reserve Bank of St. Louis. "3-Month London Interbank Offered Rate (LIBOR), based on U.S. Dollar." fred.stlouisfed.org/series/USD3MTD156N. (accessed May 14, 2019).

The Brazilian government on December 29, 2022, published draft legislation to align Brazil’s transfer pricing rules with the Organization for Economic Cooperation and Development (OECD) Transfer Pricing Guidelines for Multinational Enterprises and Tax Administrations. This potential change in Brazilian transfer pricing policies could have significant consequences from a U.S. transfer pricing and international tax perspective.

Many companies make the costly mistake of not prioritizing trade and customs planning in supply chain management.

This article provides a checklist of areas where, with proper planning, businesses may be able to reduce or defer taxes over time.

Four Reasons to Align Your Supply Chain and Tax Strategies

Four Reasons to Align Your Supply Chain and Tax Strategies

Did you know that 45% of tax executives say they are not involved in supply chain planning?