Much has been written about the relationship between CEO pay and company performance. Shareholders and other stakeholders expect pay and performance to align for executives, in general, and for the CEO. For many companies and boards, building an effective pay-for-performance program requires numerous decisions:

Table 1 shows average pay mix for CEOs in each industry group. Base compensation as a percentage of total compensation for each CEO ranged from a high of 53% in financial services-banking to a low of 16% in technology companies.

We found clear evidence of a significant correlation between company performance and CEO pay increases in specific industry groups. CEO pay increased or decreased over time in the manufacturing, energy, retail and financial services-nonbanking industries in concert with changes in company TSR. Companies in the other industry groups did not exhibit a significant alignment between changes in CEO pay and TSR performance over time.

However, it should be noted that percentage change in CEO total compensation and change in TSR performance were quite consistent across all industries. This suggests strong evidence for a pay-for-performance relationship.

Conducting the analyses separately for each industry group was critical since the percentage of total direct compensation paid in the form of incentive pay differed across industries, ranging from a high of 82% for technology to a low of 45% in financial services-banking.
Table 3 summarizes the results by industry and performance metric. The compensation element that had a significant correlation with the performance metric is noted (Base, STI, LTI). 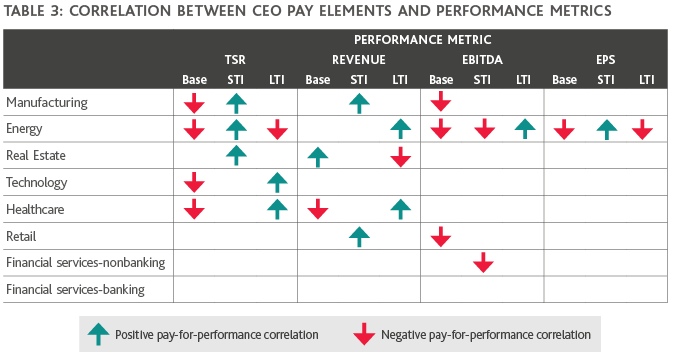 A significant relationship between the portion of CEO total compensation delivered through incentives and change in company performance was evident in seven of the eight industry groups for at least one measure of company performance.