The historic passage of the new tax law has generated an unparalleled opportunity for business transformation for American companies, and it all starts with the tax function. From parsing through thousands of pages of tax legislation and related explanation, to identifying how each provision impacts their business, to figuring out where to reinvest savings, tax executives must be mindful that the ramifications of reform will be unique to each business and may change as additional guidance and corrections are available.

Last year, every tax executive surveyed in the 2017 BDO Tax Outlook Survey predicted tax reform would be enacted under President Trump. However, planning for the outcome was a difficult task given the lack of detail, especially considering the many changes the legislation underwent just hours before it was passed.

Now that federal tax reform is law, implementing reform changes is the chief task at hand for executives for the foreseeable future.

According to BDO’s 2018 Tax Outlook Survey, 91% of respondents cite implementing tax code changes as their primary tax issue for 2018.

Seventy-two percent are concerned with implementing federal tax changes, and another 19 percent prioritize tax code changes at the state and local level. 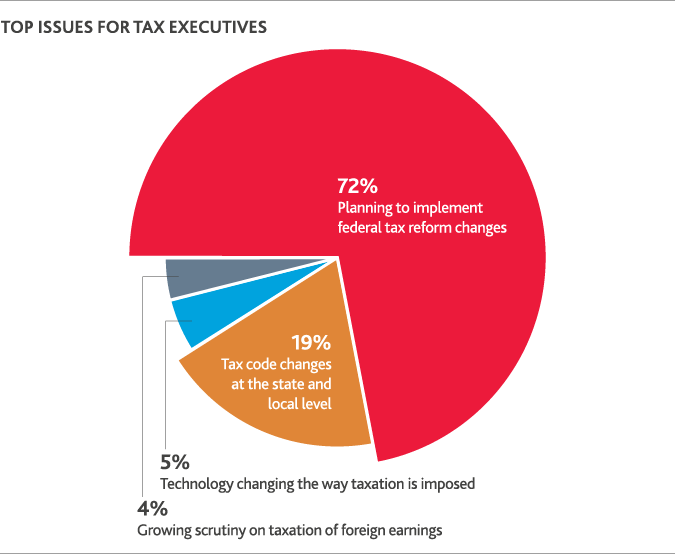 Respondents are nearly unanimous (97 percent) in saying that the reduced corporate tax rate will have the greatest impact on their business. Though executives may not have been planning for a specific rate reduction, in 2017 40 percent of executives put a reduced corporate tax rate at the top of their tax reform wish list. Following the bill signing, more than three quarters (78 percent) of survey participants have an optimistic outlook, expecting the tax overhaul will have a positive effect on their businesses’ net income.

Overall, the tax overhaul’s effect on a company’s bottom line will be challenging to assess quickly, requiring proactive planning to ensure that every provision is carefully reviewed. Companies should keep in mind that federal reform is just one layer, and that states are in the process of making changes as well. For now, we’re seeing states make reform-related decisions on a case-by-case basis. Some states, especially those with higher taxes like California, are beginning to chart a course to make it easier for resident taxpayers to navigate reform.

The impact of tax reform is different for every business based on industry, legal structure, capital structure, geography, business objectives, and other details. Businesses should strategize around the untested tax code to decide where wins, losses, and opportunities may lie, and model how the “butterfly effect” of change may impact their company. Just as there are thousands of pages in the new tax law, there are thousands of possibilities when it comes to planning for a change of this magnitude.

“While it has always been important for companies to remain nimble and maintain a high care factor, both attributes are now critical in order for businesses to succeed in the post-tax reform environment. Companies can expect legislative technical corrections and administrative guidance to come down the pike, so it’s imperative that they do what they can to plan today, and remain ready to respond to any further word on tax reform from Congress, the Treasury Department, or the Internal Revenue Service.”