2019 Board Survey: Takeaways for Tax Executives

2019 Board Survey: Takeaways for Tax Executives

Two calendar years after the enactment of tax reform legislation known as the Tax Cuts and Jobs Act of 2017 (TCJA)—the biggest overhaul to the federal tax code in decades—and 18 months since the U.S. Supreme Court ruled in South Dakota v. Wayfair, U.S. businesses are unsurprisingly still adapting to a dramatically altered tax landscape.

In some ways, the impacts of tax reform are clear. Businesses have saved billions due to the corporate tax rate cut, for example. But other areas of tax reform remain murky, and the IRS and Department of Treasury continue to release clarifying guidance on elements like GILTI, FDII and BEAT.

At the same time, because of Wayfair, any business substantially engaged in remote sales across state lines is likely on the hook to pay sales taxes, and possibly income tax, exponentially complicating state and local tax compliance.

Compliance complexity is further compounded by the construction of more interconnected global systems, like the digital tax framework project underway at The Organisation for Economic Cooperation and Development (OECD).

All this means the role of the tax professional continues to be pivotal in deciphering these regulatory changes and implementing strategies and processes in order to comply with international and domestic tax regimes. After all, a single, seemingly simple business decision can carry tax implications throughout a company’s value chain.

With challenge comes opportunity. Based on the opinions and insights of 180 corporate directors on public company boards from the 2019 BDO Board Survey, here are our top three takeaways tax professionals should bear in mind as we move through 2020.

Just as no business decision is made in a vacuum, the effects of a business decision are not linear. Like living organisms, businesses comprise of systems whose components are connected in many complex ways. A business decision made by an executive in the C-suite could have just as many tax implications as one made by a mid-level HR representative.

Total tax liability is the sum of all taxes owed by a company—from income to customs and duties—at any given point in time. Understanding total tax liability gives companies the ability to see the butterfly effects of even a single business decision. In last year’s Board Survey, 95% of boards represented having a moderate to high understanding of their company’s total tax liability. One year later, that figure is down 30 points to 65%.

What level of understanding do you have of your company’s total tax liability and its impact on corporate tax strategy? 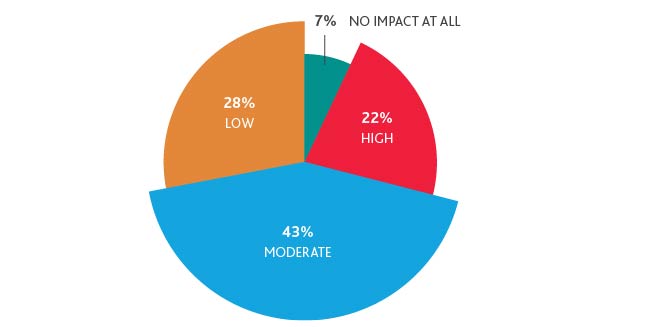 With two years of tax reform in action and the beginnings of clarity on how states are responding to the Wayfair decision, the results that point to board directors having less understanding of total tax liability in 2019 than they did in 2018 could actually be an outcome of growing uncertainties arising from macroeconomic factors, such as the U.S.-China trade war, tariffs the United States has imposed on close trading partners, like Mexico, and general concerns about the direction of the U.S. economy.

There is also the possibility that with more education about the complexity of their companies’ tax systems, board directors are realizing that they need more information. Total tax liability can be mapped in near real time, giving executives and board directors a clear and near-immediate picture of their company’s tax position. Accomplishing such mapping, however, requires significant and efficient resources.

Nearly half (47%) of board directors identify the reduced corporate tax rate as having the biggest impact on business. According to data from S&P Global, the effective tax rate of companies in the S&P 500 was 18.2% by the fourth quarter of 2018, lower than the federal income tax rate of 21% (the TCJA lowered the corporate tax rate from 35%).

Boards are also becoming more aware of the implications of tax reform on their companies. Slightly fewer respondents in 2019 say tax reform didn’t affect their business—31% compared to 39% in 2018–but largely remain cautious on spending.

As tax professionals are consulted more and more on the tax implications of business decisions, it is important that they be able to inform directors’ understanding of critical tax issues, including:


Which one of the following resulting from the TCJA has had the biggest impact on your business?


… But companies are stockpiling, not spending cash.

Savings from paying a lower tax rate have not necessarily translated into spending, which was one of the selling points of tax reform—in theory, a lower corporate tax rate would result in increased capital spending.

Nearly half (47%) of board directors this year say they have no plans to pursue particular activities, like M&A, increasing employee wages, or dividend increases, as a direct result of tax reform. This number is down from 64% who said the same last year, which suggests that while many businesses may be in a holding pattern as they filter through the potential impacts of tax reform, especially as guidance from the IRS periodically continues to be issued, companies that have assessed these impacts are more confidently moving forward.


Which of the following has your company pursued or does it plan to pursue as a result of the TCJA?

The year-over-year decrease is also interesting in light of the fact that boards are wary of an economic downturn; it is the most discussed (30%) geopolitical topic around the table, and 48% of directors are specifically developing strategies to cope with a downturn, should it come to pass.

As tax executives manage ever-increasing tax complexities, they must also serve as strategic advisors, helping board directors demystify the tax landscape so companies can put capital to work. During the Great Recession, the term “cautious optimism” was used to explain to analysts why a company was holding on to capital rather than reinvesting in corporate operations or paying out dividends. On the cusp of what many believe to be an impending recession, waiting for a break in the clouds may echo that cautious optimism, but it could also mean sacrificing potentially lucrative or beneficial business opportunities.

Need help understanding what tax reform, the Wayfair decision or the OECD’s global digital tax framework mean for your business or industry? Explore our guidance and content in our related insights linked above.