In 2019’s second quarter, the restaurant industry saw same-store sales grow a healthy 1.8% overall, edging out performance in the first quarter of the year. But despite strong consumer spending in restaurants, many are finding that with continually increasing labor costs and shifting consumer dining habits, they still need to do more with less.

As a result, many restaurants are doubling down on initiatives that demonstrated value in 2018 and early 2019—namely, increasing their digital presence and implementing a strong delivery program. Some have continued to rely on limited time offers (LTOs), while others have scaled back. For a few, menu price increases were the answer. But, in all, restaurants are realizing that what worked for others may not work for them—in a mature market, staying afloat means taking a tailored approach to drawing in customers while keeping a close eye on managing costs.

The Fast Casual segment enjoyed the highest increase in same-store sales through Q2, showing a gain of 2.8%. The segment was led by Chipotle and Wingstop, which averaged same-store sales gains of 10% and 9.1%, respectively, through the second quarter. Chipotle’s gains represented its sixth consecutive period of growth, thanks in large part to its successful loyalty program and an increased focus on digital, with the chain reporting that its online sales nearly doubled during the quarter. For Wingstop, the brand’s national launch of online ordering and delivery aided in its success, as well as a strategic 1% increase in advertising spend, which helped the chain draw in first-time customers.

The Casual segment continues to demonstrate strong performance, reporting a 2.0% hike in same-store sales through Q2. A standout of the segment was Diversified Restaurant Holdings, one of the largest franchisees for Buffalo Wild Wings, which saw same-store sales climb 5.0% through the second quarter. Despite heightened competition in the casual dining space, Diversified Restaurant Holdings saw growth as a result of higher check sizes and increasing foot traffic. Meanwhile, Texas Roadhouse attributed its 5.0% gain to its strategic implementation of menu price increases.

In Quick Serve, McDonalds attributed its 5.1% gain through the first half of the year to the ongoing success of its LTOs, including its 2-for-5 Mix and Match deal and new International menu offerings. Taco Bell also continues to relish in the success of its innovative menu and LTOs and has seen 5.5% in same-stores sales growth through Q2. Additionally, despite averaging a year-to-date decline of 2.4%, Good Times Burger’s results in Q2 demonstrated a strong rebound from poor performance in the first quarter of the year, when they reported –7.5% same-stores sales. The burger chain attributed the comeback to a strategic menu price increase implemented in Q2.

The Pizza segment, excluding Papa John’s, saw same-store sales growth of 1.8%. Domino’s continues to lead the pack, rising 2.6% through Q2 2019, thanks to its strong digital presence and in-house delivery capabilities. Yum Brands’ Pizza Hut saw same-stores sales inch up 1% through the second quarter, citing strategic improvements in operations and technology in their stores. The brand is looking to move away from its focus on dine-in venues, turning its attention to delivery and carry-out while shedding underperforming stores.

With cost of sales across the industry climbing 0.2% through Q2, restaurants paid close attention to offsetting continually increasing labor costs and fluctuating commodity prices. For a handful of brands, this meant installing menu price increases.

Commodity pricing was largely favorable throughout the quarter, with a 5.4% decrease in pork prices being the most notable. A significant decline in the price of eggs also had a positive impact on those with breakfast offerings, namely McDonald’s and Taco Bell, both of which are undergoing efforts to increase their presence around the most important meal of the day. Meanwhile, a 5.5% increase in beef prices through Q2 can be attributed to the late arrival of warm weather this spring. Fortunately, with many brands having established lock-in pricing with their vendors, the impact of price-hikes has been largely muted.

Restaurants continued to grapple with rising labor costs (+0.4%) through the second quarter of 2019. As labor costs continue to weigh heavily on restaurants’ already razor thin margins, restaurants are acutely aware that doing more with less is their only option. Fortunately, the implementation of technological aids, including ordering kiosks and mobile ordering applications, has allowed some restaurants to mitigate the impact. But this is not yet widespread—these solutions are most commonly implemented in the Quick Serve and Fast Casual segments, primarily in metropolitan areas.

What’s Next for Restaurants

Looking ahead at the balance of 2019 and beyond, the restaurant industry will continue to contend with many of the same challenges they’ve been facing for years, namely, increasing competition and rising labor costs. But perhaps the biggest challenge—and one that many restaurants are only beginning to address—are shifting consumer spending habits.

With Millennials on track to become the biggest spenders at restaurants within the next ten years, according to CBRE, restaurants should be prepared to act nimbly to meet the wants and needs of this growing generation of diners. Many restaurants are taking initial steps to capture this spending, with the implementation of loyalty programs, digital ordering and healthier menu options. Those that fail to modernize, both in their operations and in their menu offerings, are unlikely to succeed.

But in looking to modernize, restaurants should be wary of playing follow-the-leader. What worked for some restaurants may not work for others—for example, a Casual chain may not benefit from implementing a delivery program the same way a Quick Serve chain would. An Upscale Casual restaurant might be able to improve efficiency by installing ordering kiosks—but will they lose out in customer experience? It’s important that restaurants know their consumer as well as they know their business, allowing them to make informed decisions while keeping close tabs on the financial implications. 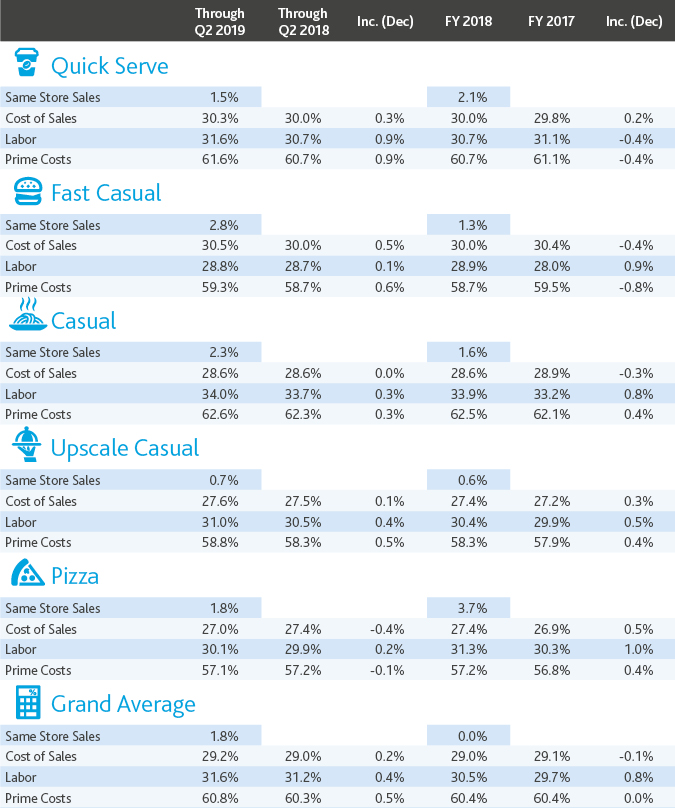