Recent comments by Joseph Otting, the head of the Office of the Comptroller of the Currency, about banks no longer needing to adhere to leveraged lending guidance, may spark an uptick in competition among lenders —banks and non-banks alike— to provide more debt financing to an already highly levered universe of private equity-backed companies.

Leveraged lending guidance, which the Securities and Exchange Commission introduced in 2013, recommended capping leverage at 6x EBITDA. But in October, the Government Accountability Office noted that such guidance was actually a rule subject to Congressional review. It is generally understood that this means a repeal is imminent. Otting’s comments are aligned with this. He himself noted that he expects leverage ratios to trend upward over the next year.

Banks, being that they are much more regulated than non-banks or alternative lenders, were for the most part heeding the guidance, but non-banks haven’t been as strict, stepping in to provide riskier credit to borrowers. In fact, the most active lenders to PE-backed companies in 2017 were mostly non-bank lenders, according to data from PitchBook. The top five lenders to PE were Antares Capital, Ares Management, Madison Capital Funding, Jefferies and Goldman Sachs.

The universe of non-bank lenders has also been rapidly expanding. In fact, private debt funds raised $118.7 billion in commitments in 2017— the most of any year on record, according to PitchBook. Out of that figure, $52.6 billion was raised in direct lending funds. The boom in the private debt fund segment is partly fueled by the fact that banks are hamstrung by regulations. 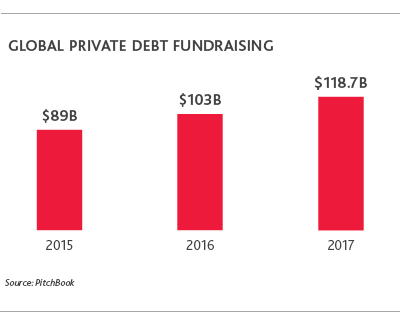 Demand for debt has also been high, especially as interest rates have remained at very low levels for the past few years.

As a result, leverage on large leveraged buyouts increased to a little over 6x in the third quarter of 2017, the highest since the financial crisis, according to S&P Global’s Leveraged Commentary & Data. According to PitchBook, debt multiples in the U.S. middle market specifically, hit a 5.6x median in 2017, up from 5.2x in 2016.
The loans themselves are also riskier, especially as a great portion of them are covenant-lite, meaning that they impact the lender’s ability to call a default as the borrower’s financial condition deteriorates. So far, data from LCD indicates defaults levels are low, but if the tide were to change recoveries will be more difficult to achieve.

After Otting’s comments, and if Congress announces an official repeal of the leverage guidance, regulated banks may find themselves freer to compete against an ever-expanding non-bank lender segment and approve deals that they would have otherwise rejected.

Preparing for an IPO During a Market Slowdown

Preparing for an IPO During a Market Slowdown

2021 was a banner year for traditional IPOs and SPAC IPOs, a stark contrast to the 2022 IPO market, which was one of the slowest in more than a decade. The outlook is favorable for an increase in IPO activity in 2023.

On the latest episode of BDO’s Private Equity PErspectives podcast, host Todd Kinney speaks with Justin Wender, Managing Partner at Stella Point Capital, and Rob Bosco, Managing Director of Stone-Goff Partners on how a recession could impact private equity and what they’re seeing in the GP-led secondaries market.