The 2017 BDO RiskFactor Report for REITs examines the risk factors in the most recent 10-K filings of the largest 100 publicly traded U.S. real estate investment trusts; the factors are analyzed and ranked by order of frequency cited.

2017 is leaving a string of broken stock market records in its wake. Since hitting the 20,000 mark for the first time days after Donald J. Trump’s inauguration, the Dow Jones Index has climbed past 21,000, and NASDAQ surpassed 6,000. REITs have seen more modest boosts in performance, registering 3.41 percent growth for the year as of June 2 compared to the broader S&P 500’s 9.91 percent gains.

Competition for assets at lucrative prices, the anticipation of tax reform and the likely drumbeat of interest rate hikes through the rest of 2017 could be peppering the market with uncertainty and serving up unappetizing borrowing cost increases for REITs.

“After enjoying several years of growth following the economic crisis, investors are beginning to take a more cautious approach. A potential slowdown in the market, combined with concerns of rising interest rates, a lack of continued access to capital, and disruptions in several REIT sectors, has added to the uncertainty. For REITs navigating the current economic environment, there is a real possibility this confluence of factors may result in slower growth.” 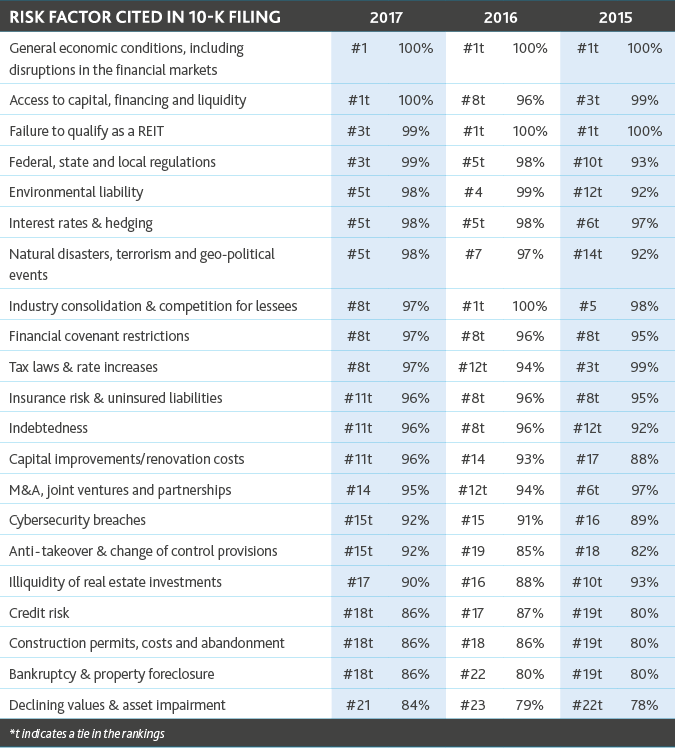 Changing of the Guards: REITs Adjust to the Trump administration

REITs are preparing for legislative, regulatory and tax changes under the nation’s 45th President, with tax and healthcare reform topping the list. More than one-quarter (26 percent) of the REITs analyzed mention Trump’s name a total of 59 times in their 10-K filings. Forty-four percent reference the new administration—and the resulting uncertainty—as a risk factor.

Risk related to portfolio diversity spiked this year—with 72 percent of REITs citing geographic concentration as a risk, compared to 60 percent last year. REITs may be looking to further diversify their portfolios and broaden their investment horizons in 2017. While more than half (56 percent) of REITs point to impediments to U.S. expansion as a concern, that risk is down slightly from 63 percent last year.

International real estate markets—including Canada, Europe, India and New Zealand—are home to many attractive investment opportunities, but capitalizing on opportunities abroad comes with risk. Fifteen percent of REITs raised concerns related to the United Kingdom’s vote to leave the European Union (Brexit) last year. Complying with international legislation, regulations and any changes to how the US taxes repatriations could also prove challenging.

“Now that Brexit negotiations are underway, REITs with properties or investments in the U.K. are gearing up for what’s ahead—with a keen eye on any changes to trade or regulatory policies. It remains to be seen how the negotiations will play out; uncertainty still reigns supreme.”

Hold on to Your Hats: Regulatory, Tax & Accounting Changes Accelerate

REITs consistently list federal, state and local regulations as a concern, with regulations tying as the third most-cited risk this year. While keeping a close eye on how tax reform initiatives and potential easing of Dodd-Frank requirements shake out, REITs are also preparing for recent accounting and tax guidance, like revenue recognition, lease accounting and the PATH Act.

The top 100 REITs unanimously cite access to capital, financing and liquidity as a risk to their business, up from 96 percent in 2016 and 93 percent in 2014. REITs are bracing for the impact of multiple interest rate increases, which REITs worry could lead to restricted access to equity and more expensive debt in the long term.