Strong First Half Has U.S. IPO Market on Track for Best Year Since 2014

After experiencing a major downturn in 2016, the U.S. market for initial public offerings (IPOs) bounced back significantly last year and that momentum has continued in 2018.  The U.S. IPO market has performed impressively in the first half of the year, with offering activity (+36%), total proceeds raised (+40%) and new filings (+36%) all increasing significantly from the same period of a year ago.

Moreover, offering activity appears to be building momentum, with the number of IPO pricings jumping from 44 in Q1 to 61 in Q2, peaking in June with 28 deals.

Much of the turnaround can be attributed to a resilient stock market, the business-friendly new tax law, continued deregulation and, most importantly, the positive performance of the offerings that have come to market – both this year and last year.

“Last year the U.S. IPO market bounced back from two consecutive years of dwindling offerings and proceeds, however, given the strength of the overall economy and strong stock market performance, many observers were surprised that even more businesses didn’t pursue a public offering in 2017,” said Paula Hamric, Partner in BDO USA’s National SEC Practice. “In 2018, higher pricings and favorable returns appear to have alleviated previous concerns with going public, with more than 100 IPOs on U.S. exchanges in the first six months of the year and an even larger number of businesses filing for a future offering.”

The healthcare and technology sectors have been the clear leaders among this year’s offerings.

Healthcare IPOs, driven in large part by many biotech offerings that have priced at or above their proposed range, have more than doubled from the first six months of 2017 and are on pace to lead all industries in IPOs for the sixth consecutive year.  Technology offerings are up 81 percent year-over-year as the strong performance of recent tech IPOs has encouraged some mature technology companies to pursue the public markets.

Overall, there are six industries on pace to achieve double digits in number of offerings in 2018.  Below is a breakdown of this year’s IPOs by sector: 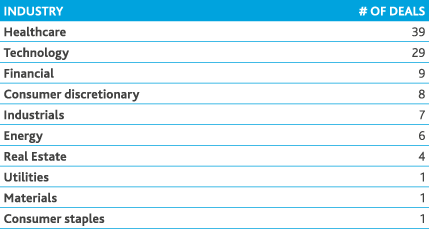 “Healthcare and technology are the key drivers of the jump in IPOs in 2018. The increase in tech offerings is especially promising for the U.S. IPO market,” said Ted Vaughan, Partner in the Capital Markets Practice of BDO USA. “For several years, the plethora of available private funding at high valuations has led many Silicon Valley start-ups to steer away from public offerings and the potential for less favorable valuations. However, the strong performance of technology IPOs over the past 18 months is leading to more offerings from this sector and increased expectations that major offerings from Uber, Airbnb and other ‘tech unicorns’ may be on the way.”

With shares of newly public companies performing well – returning an average of 26 percent from their offering price – the IPO window appears to be wide open for the remainder of 2018 as capital markets are largely receptive to offerings from a wide breadth of industries.  Absent an unforeseen shock to the market, the pace of offerings should continue to accelerate during the second half of the year.

While the IPO forecast for 2018 is very promising right now, there are potential threats on the horizon that can swiftly change that outlook in the very connected world we live in.  The escalating trade war, upcoming mid-term elections and international news - ranging from leadership elections to the ongoing negotiations with North Korea – all have the ability to swiftly impact U.S. markets and introduce a level of volatility that is not conducive for businesses considering a public offering.

“The strong pricing and aftermarket activity for IPOs thus far in 2018 should encourage even more businesses to enter the public markets this year,” said Christopher Tower, Partner in the Capital Markets Practice of BDO USA. “The jump in activity at the close of Q2 should continue in July as offering companies attempt to price prior to the traditional August lull and, more importantly, avoid any growing uncertainty about the fall mid-term elections and how they might affect the markets.”

* Renaissance Capital is the source for all historical data related to the number, size and returns of U.S. IPOs.
Article July 05, 2018
Printprint
Articlefile_download

Consistent with prior years, the annual AICPA & CIMA Conference on Current SEC and PCAOB Developments was held in Washington D.C. on December 12-14, 2022, where representatives from the Securities and Exchange Commission and the Public Company Accounting Oversight Board shared their views on various accounting, reporting and auditing issues.

BDO was a corporate sponsor of and active participant in several leading governance summits held in the fall of 2022 including the Association of Audit Committee Members Inc., Corporate Board Member and the National Association of Corporate Directors. The following reflects key priorities and considerations as we head into 2023 identified based on our discussions with corporate director attendees, subject matter experts and other related relevant research and thought leadership.