“Patience is one of the most valuable attributes in investing.”
- Martin Zweig

The third quarter began with stocks and bonds at oversold levels due to the Fed’s announcement in June that it was expecting to increase interest rates by 0.75% in July instead of the anticipated 0.50%. Soon after the announcement, the market began a strong recovery that continued until August 15. This reflected investor optimism that peak inflation was behind us and that the Fed would ultimately pause rate hikes and allow time for their prior actions to take effect. Normally, Fed actions take as long as a year to percolate through the economy.

However, it quickly became clear that the market’s optimism would be short-lived as a hawkish, laser-focused Fed became even more restrictive after stronger than expected inflation data was reported in subsequent months. Further Fed commentary cemented this hawkish view and culminated in Chairman Powell speaking at the annual Jackson Hole conference. The “higher for longer” view became clear as the Fed signaled it would get to highly restrictive monetary policy territory and sit at those levels for longer than expected in order to crush inflation.

Since its surprise announcement in June, the Fed has increased rates 0.75% twice more and very recently signaled increasing another 1.00 – 1.25% of rate hikes over the two remaining meetings of 2022, with the first 75 bps likely coming in November. With employment conditions still strong (thus satisfying one of the two Fed mandates), monetary policy would have room to tighten rates more to attack inflationary forces.

The Fed’s steadfastness in driving inflation lower erased the gain in the first half of the third quarter and sent stocks and bonds lower.  The S&P 500 closed Q3 down almost 25% on the year which was one of the worst starts to a year in history. The U.S. Bloomberg Barclays Aggregate Bond Index (which can be thought of as the S&P 500 of bonds) is down close to 15% year-to-date.

As we assess the current investment landscape, we can’t help but notice the opportunities that have been presented. Stocks are much less expensive relative to profits vs. last year, and short-term, risk-free bonds (short-dated Treasuries) finally have reached attractive risk/return levels.

Stocks around the world suffered another challenging quarter, with all major indices/sectors posting significant losses (other than small-cap growth, which managed a small gain). 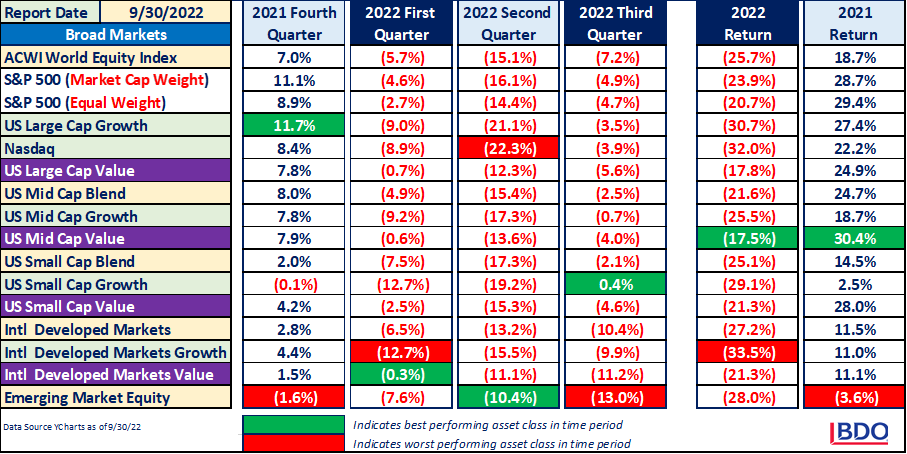 The fixed income markets have fared poorly as well with a large drawdown for bonds, particularly those with longer duration. Longer dated treasury bonds are now down nearly 30% on the year. 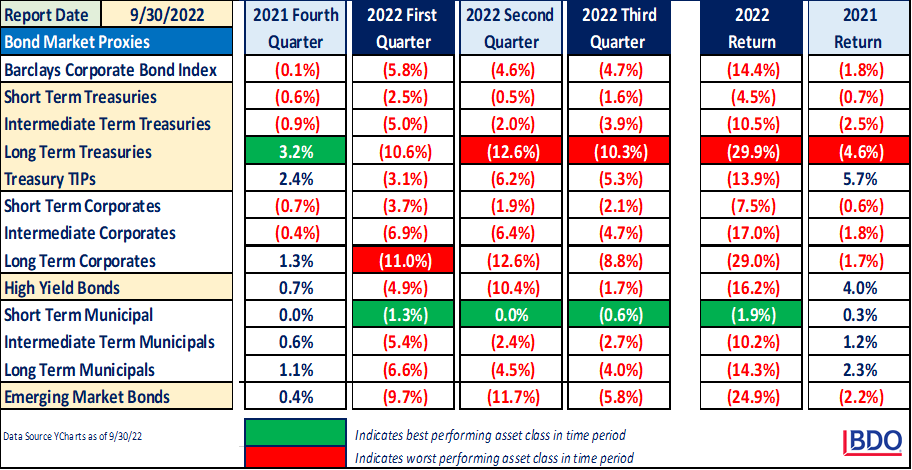 Over the last year, interest rates across all maturities have moved significantly higher, with shorter-term rates moving far more than longer-term rates. In general, this has created a more attractive yield environment for investors following many years of extremely low rates. 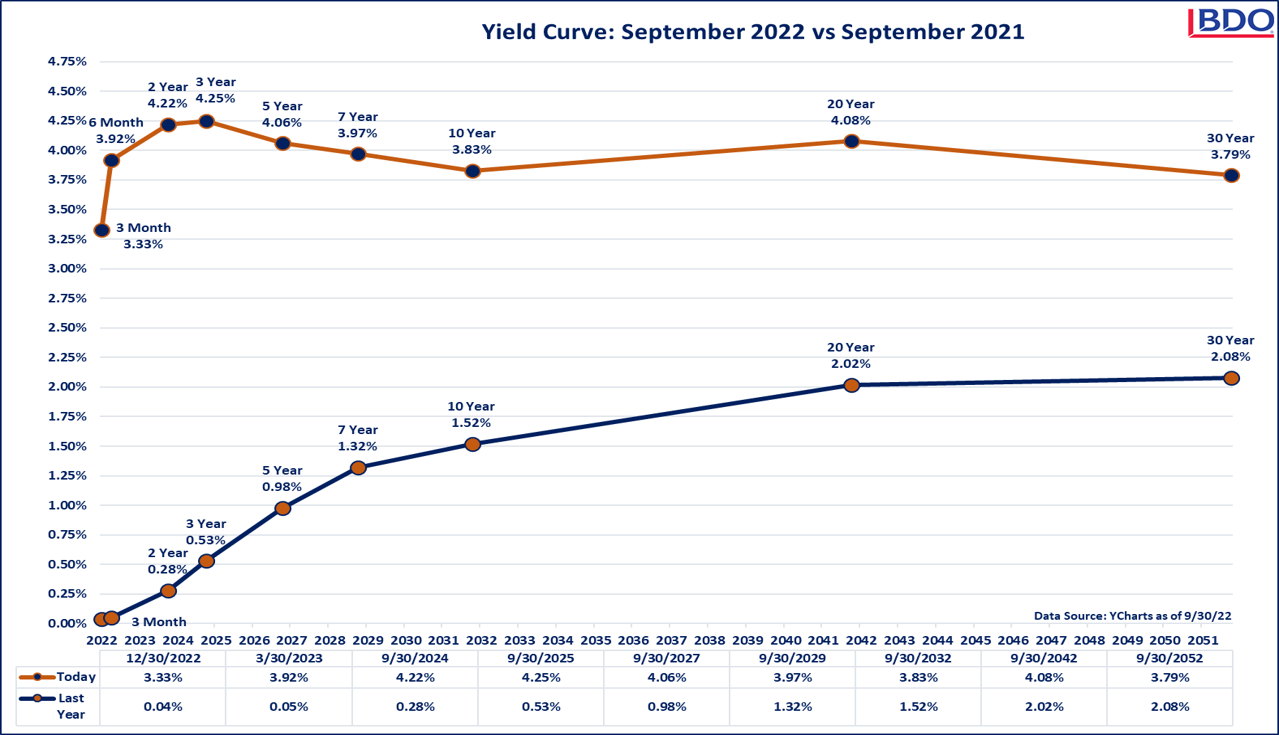 Mortgage Rates at Levels Not Seen Since Before 2005 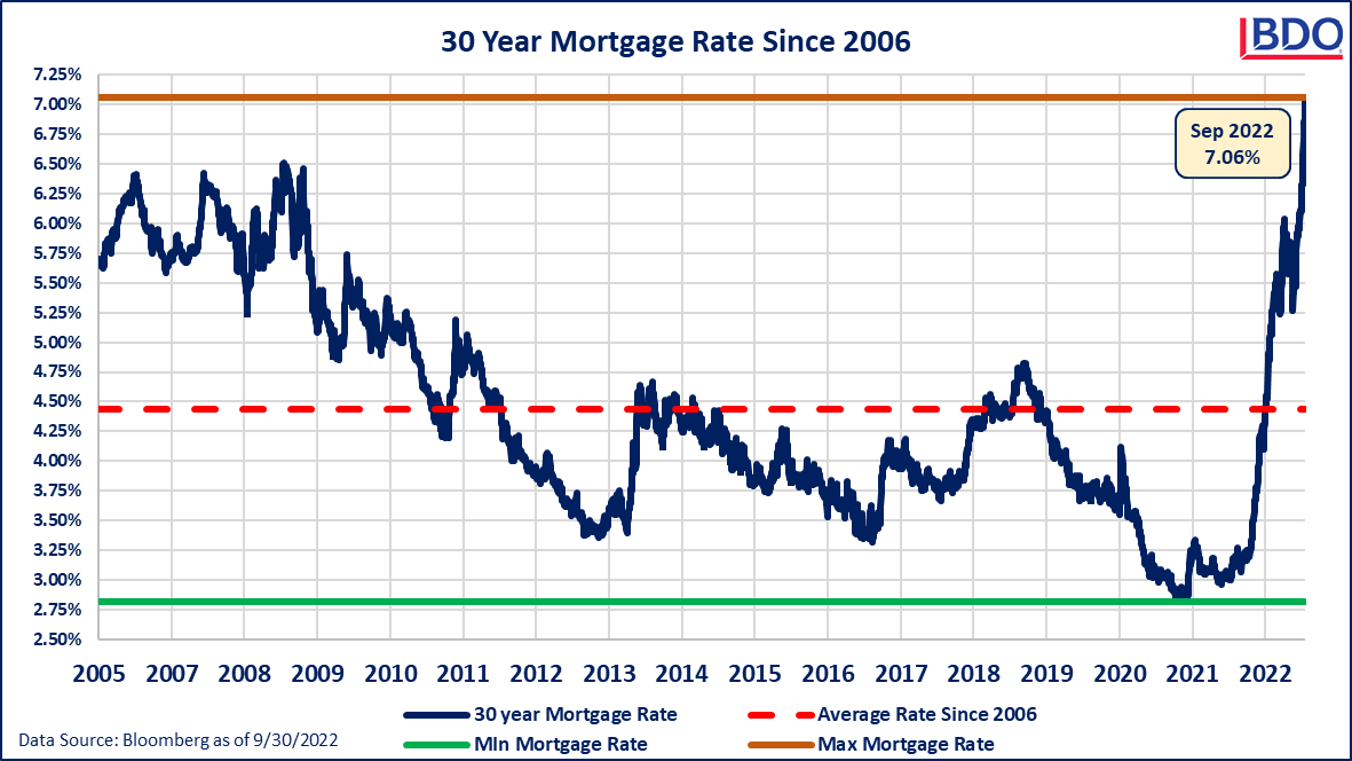 Housing Market May Be Showing Signs of Weakness

The NAHB/Wells Fargo Housing Market Index (HMI) is based on a monthly survey of NAHB members designed to take the pulse of the single-family housing market. The survey asks respondents to rate market conditions for the sale of new homes at the present time and in the next six months, as well as the traffic of prospective buyers of new homes. The survey shows that higher mortgage rates are beginning to impact the housing market. 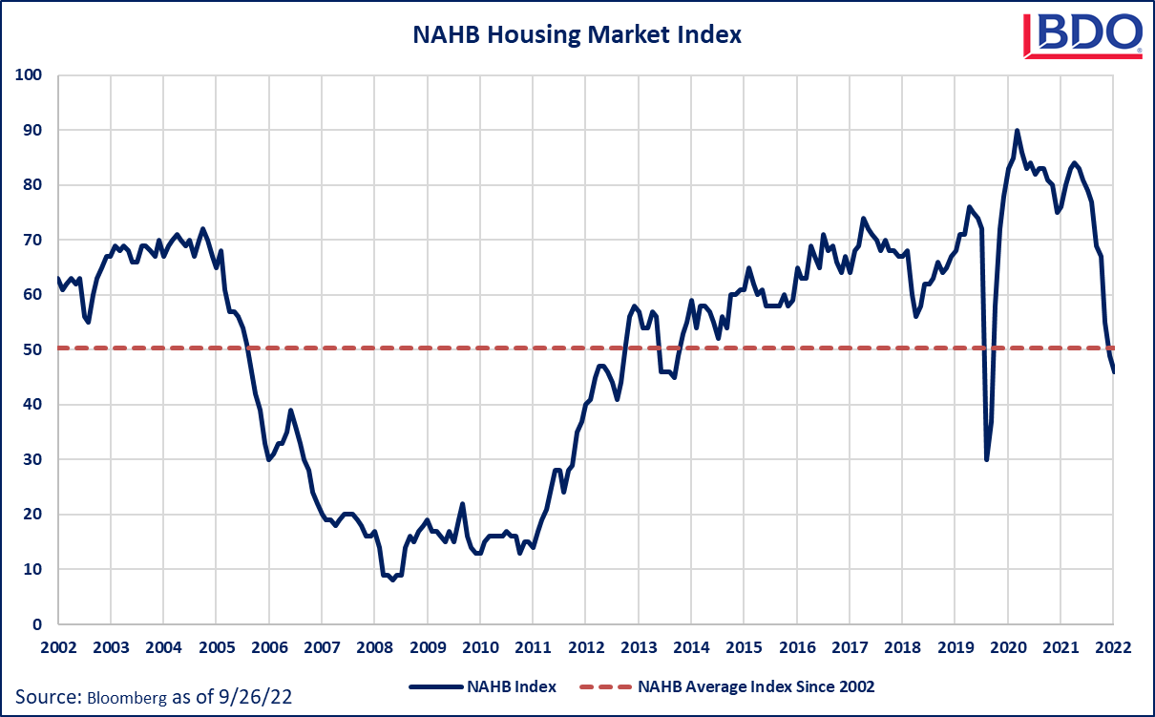 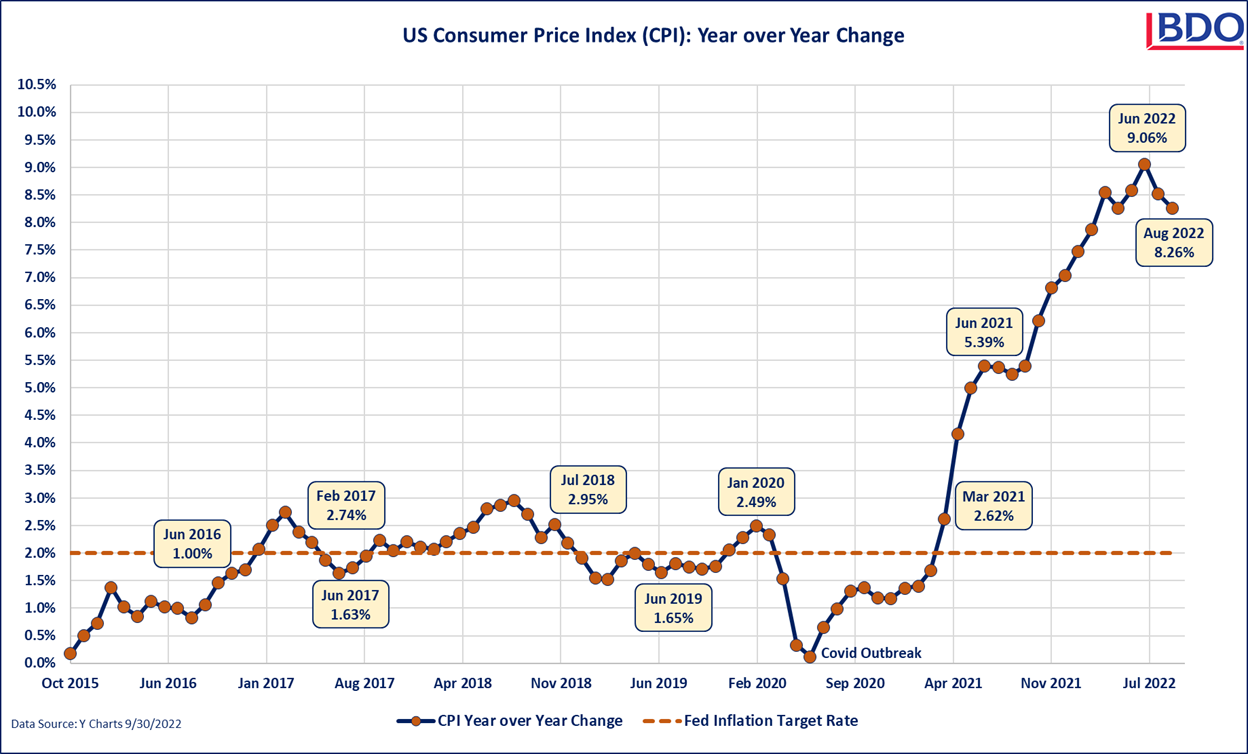 Oil Prices Have Fallen Since the Peak in March

The drop in energy prices may be easing inflation pressures and the burden on consumers. 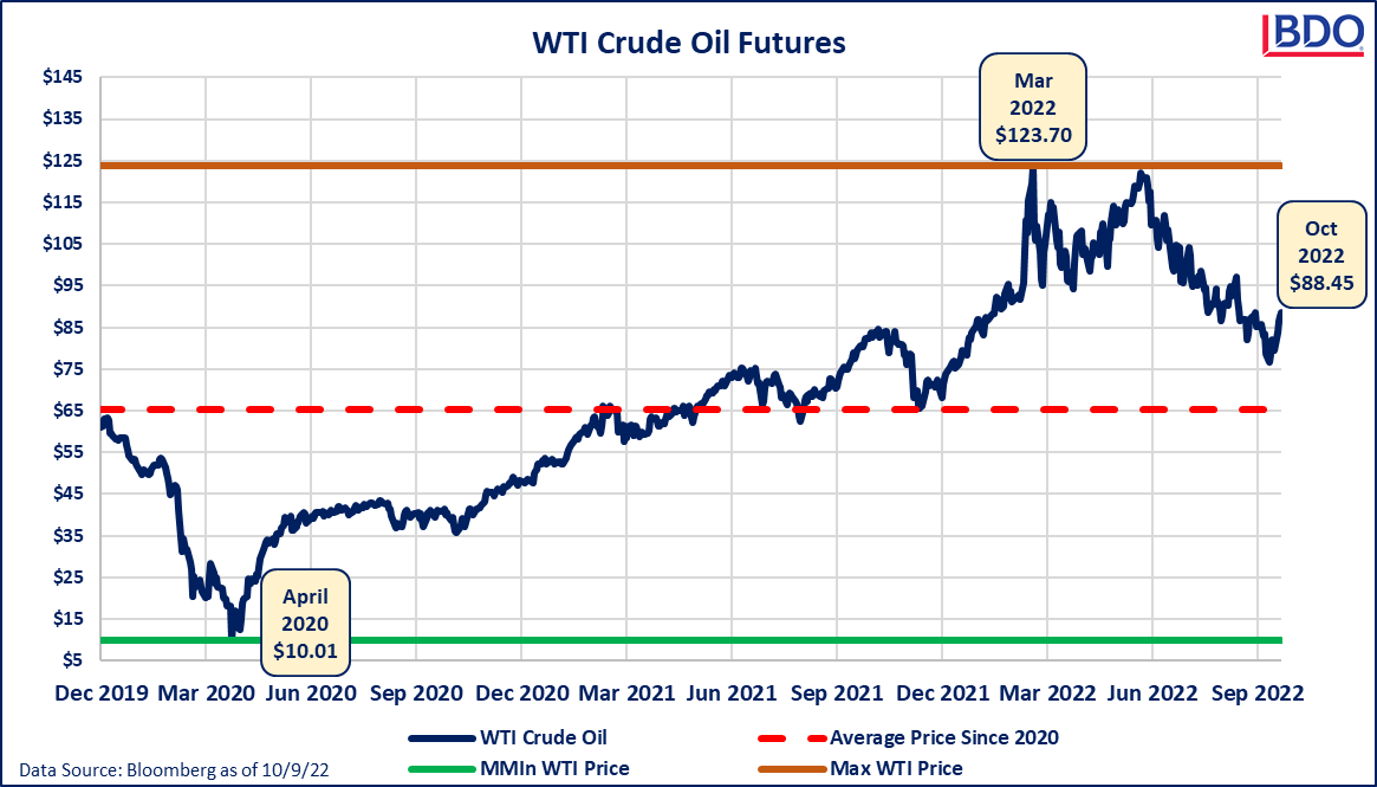 Fed Policy Has Become Restrictive as Inflation Remains Above Target

The labor markets remain strong, in line with the Fed’s mandate. Inflation levels are far above mandate levels, forcing the Fed to act to stem price increases of goods and services in the real economy. 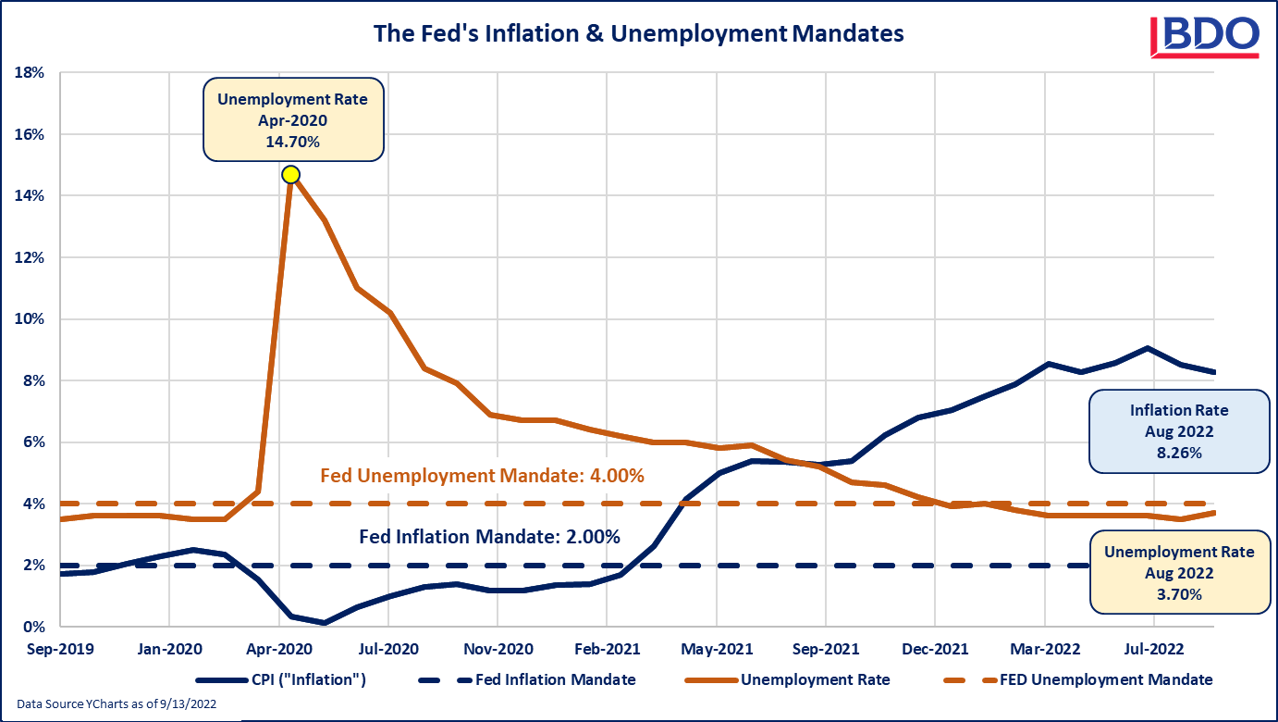 While Fed Funds futures imply further rate hikes are coming, markets are projecting an end to the hiking cycle in the first half of 2023. If these projections prove accurate, fixed income markets may begin to stabilize. 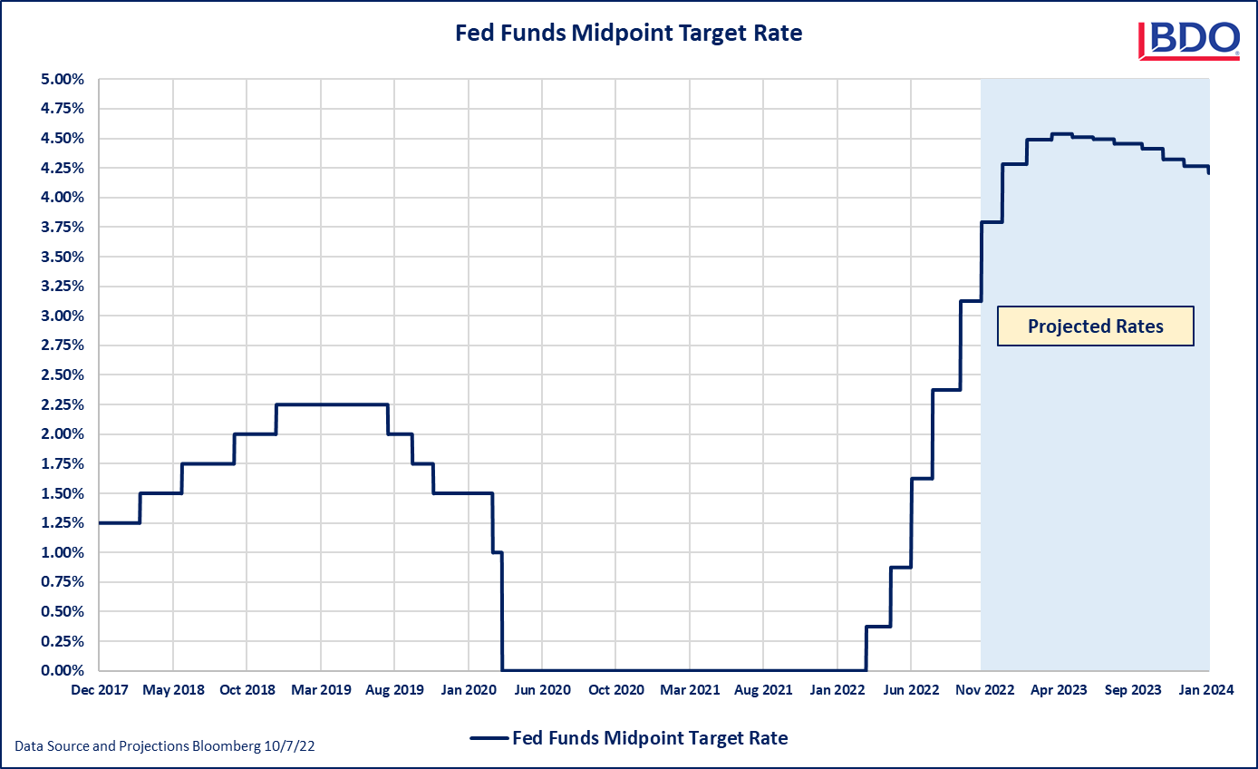 Valuations Have Dropped to Levels Below 20-Year Averages

Average P/E multiples, a commonly used method to value companies, are now below average in many areas of the market. From December 2021 to September 2022, P/E multiples have fallen dramatically when compared to their 20-year averages. 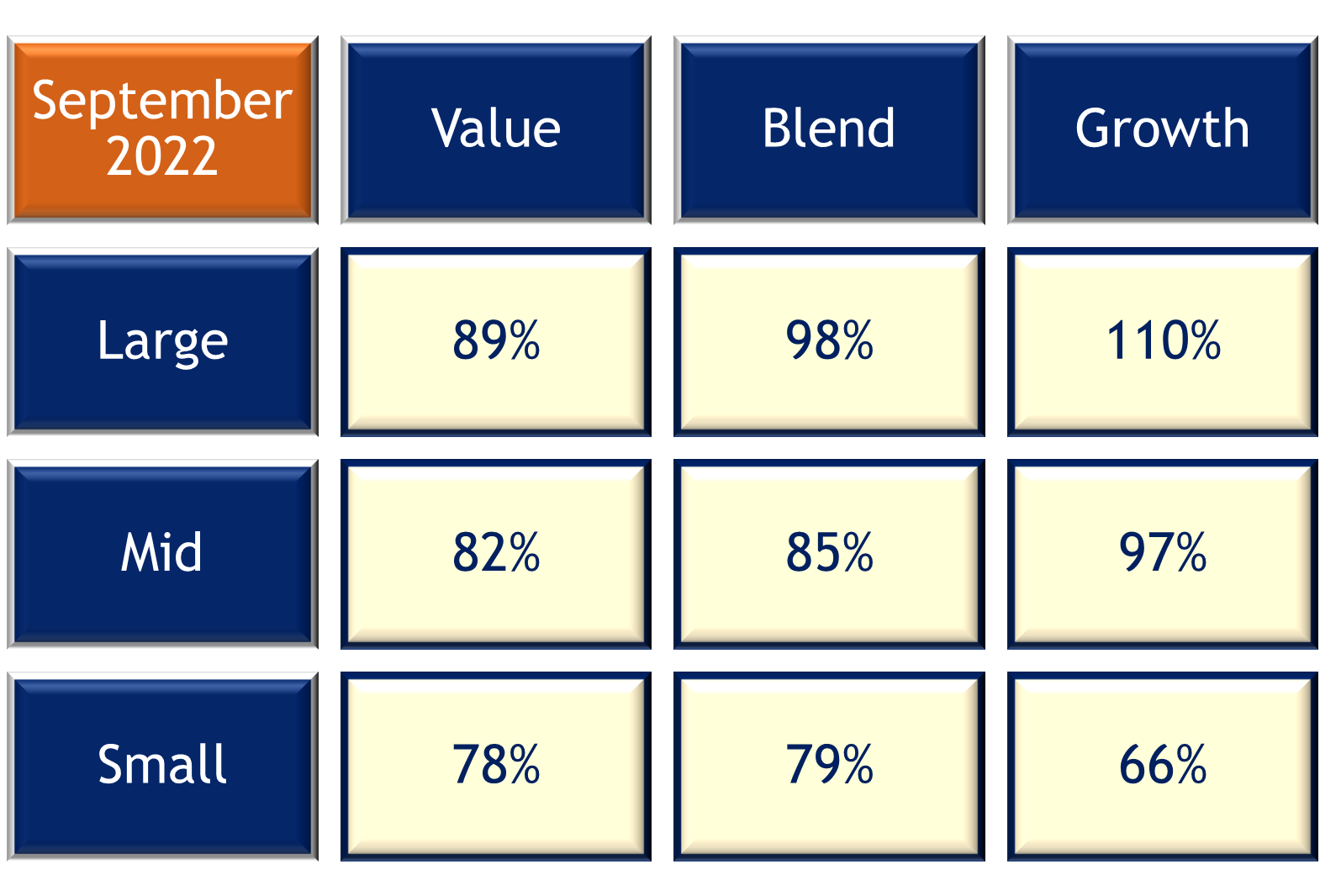 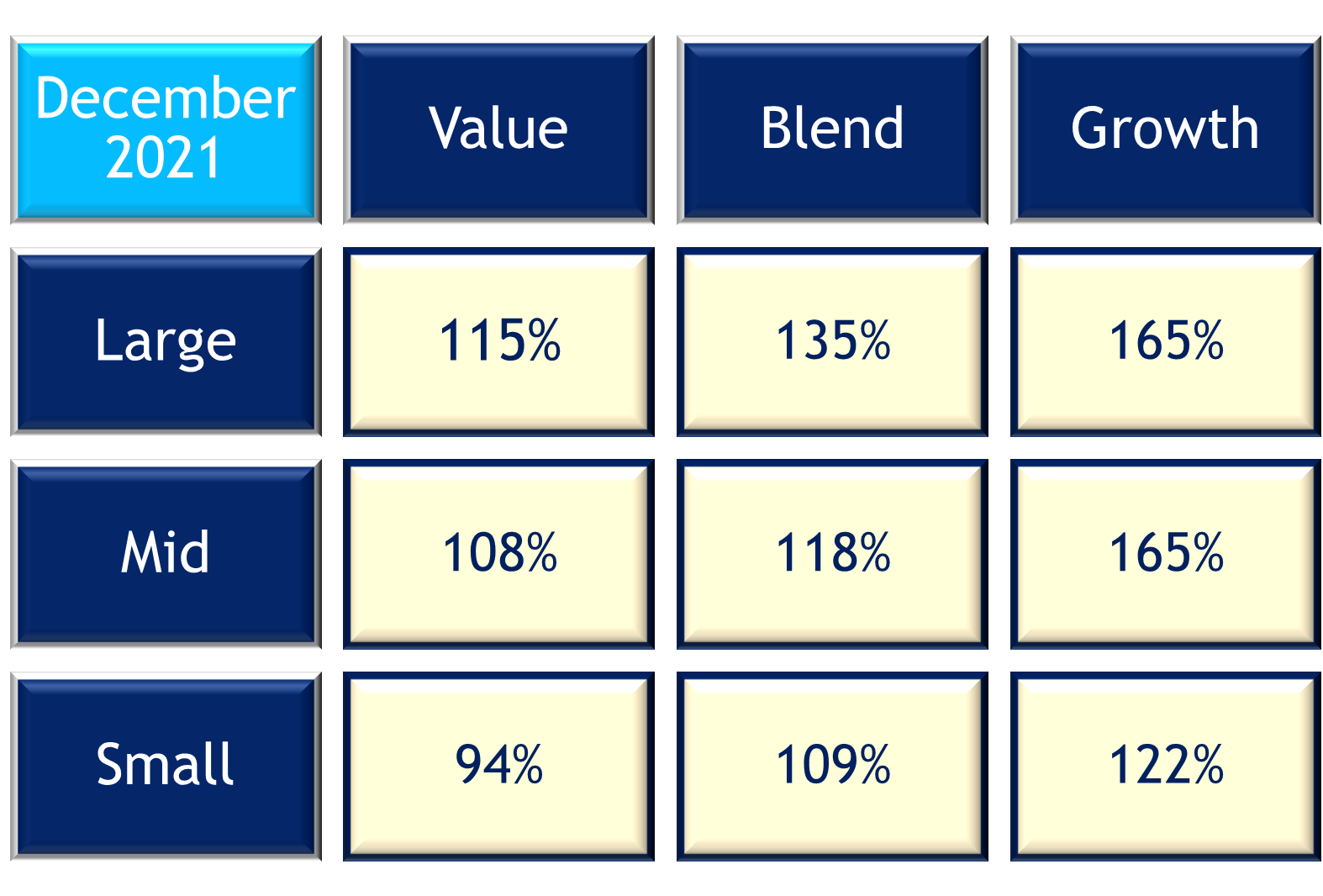 The U.S. Dollar is at Multi-Decade Highs vs. Peers

The restrictive actions of the Fed vs. central banks around the world are strengthening the U.S. dollar and challenging U.S.-based multi-national corporate profits. Additionally, this can be a boon for U.S. consumers, as a stronger currency enables consumers to purchase more foreign goods. 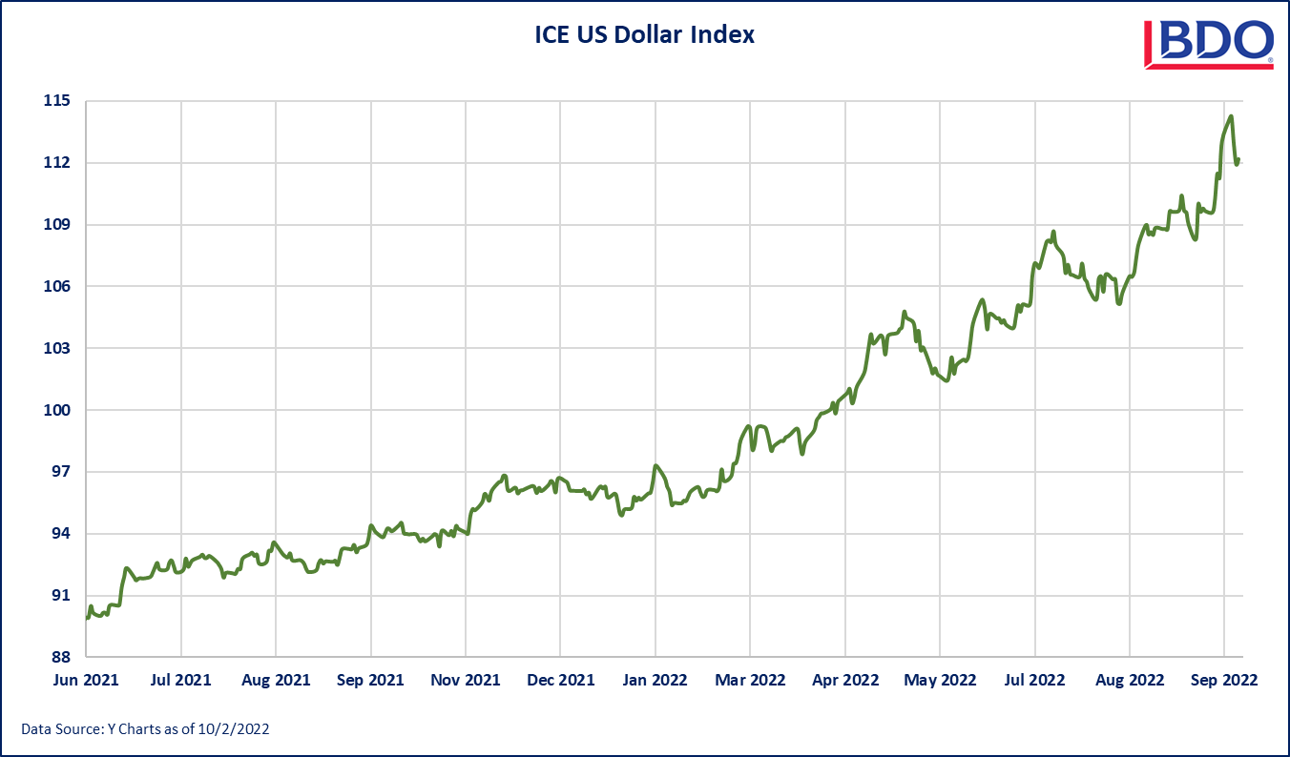 As we enter fall and head rapidly towards another year end, our process remains disciplined and focused on the long term. A balanced, rational perspective is typically a winning strategy. We leave you with another great quote from an investing legend:


“The intelligent investor is a realist who sells to optimists and buys from pessimists.”
– Benjamin Graham

Please reach out to your BDO Wealth Advisor with any questions.

In this article, we explore how a thoughtfully designed investment policy statement (IPS) serves as the foundation for an E&F’s investment program.

Concerns about economic growth are topping the headlines in early 2023 as the U.S. Federal Reserve continues to raise interest rates, the housing market slows, business financing dries up, and the stock market remains volatile.

How Private Investments Can Serve as a Hedge Against Inflation

How Private Investments Can Serve as a Hedge Against Inflation