Similar to last year, most U.S. tax executives (75 percent) currently conduct business outside North America, and more than half (53 percent) say they plan to enter or expand into international markets in the coming year. Seventy-three percent of those surveyed note that the mandatory repatriation of earnings as a result of U.S. tax reform will have an impact on their business, and 45 percent of those say this provision is “very likely” to have a significant impact. While U.S. tax reform dominates the conversation stateside, multinationals can’t afford to lose sight of other important changes taking place on the international stage.

Regulatory bodies like the European Union (EU) and the Organization for Economic Co-operation and Development (OECD) are establishing international norms for taxation. In 2013, the OECD published an action plan to address base erosion and profit shifting (BEPS). The goal of this action plan was to address the globalization of corporations, prevent the minimization of taxes in OECD jurisdictions, and ensure some standardization between international tax regimes. While the scrutiny of taxation on foreign earnings appears to intensify, only four percent of tax executives consider it a primary tax issue.

With many BEPS deadlines passed or fast-approaching, more than half of those aware of BEPS (56%) are proactively taking steps to respond to the OECD based on Action item drafts.

Meanwhile, 33 percent are waiting for individual countries to implement BEPS before acting, and eight percent are waiting for peer companies to respond to BEPS. Some country-by-country reporting rules came into effect for tax years starting on or after January 1, 2016, and 83 percent of tax executives met the December 31, 2017 deadline to complete the required country-by-country analysis. 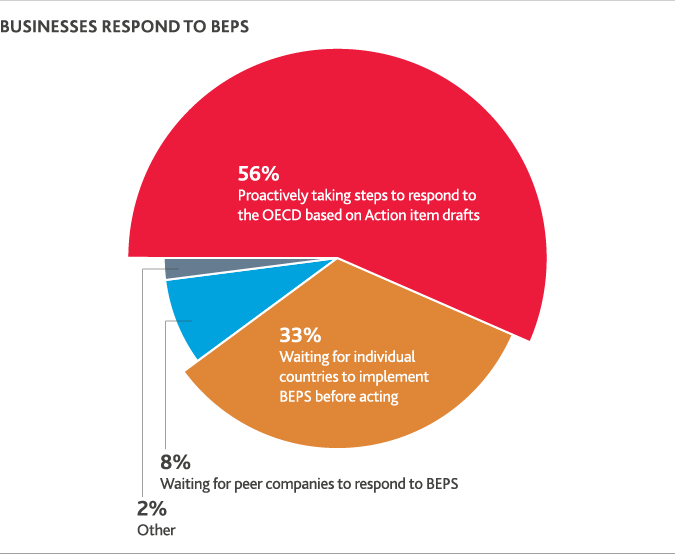 While companies weigh the options of global expansion, it’s important to consider that the lower U.S. federal tax rate combined with the weakening dollar positions the U.S. to be a cost-efficient place for foreign businesses to operate. New foreign investment across industries and markets will likely heighten competition for workers and infrastructure in key sectors. As a result, executives will be seeking tax-weighted return-on-investment modeling to keep pace with the speed of the competition, with technology helping tax leaders assess this rapidly changing landscape.

One glance at international tax news shows there’s an increased interest in transparency around foreign earnings. How U.S. companies choose to implement important regulations like BEPS and repatriate funds in light of tax reform will color how they’re perceived by bodies like the EU and OECD. Today’s web of international tax law is more complicated and more highly scrutinized than ever before. Companies will have to use technology and data analytics to understand what they’re dealing with and form effective strategies.

“Given the multitude of changes in the United States resulting from tax reform, as well as the changes occurring abroad like the OECD’s BEPS initiative, companies must continually evaluate their organizational structure and transactions to quickly respond to these significant shifts. For this reason, it is essential that companies seek outside assistance from sophisticated global tax advisors to help them understand the implications of these new and often very complex rules. Then, companies can begin to determine the best course of action in light of this constantly changing tax landscape.”