The third quarter was positive for all major indices across the globe. After the best 5 months (April through August) since 1938, many stock indices entered correction territory in September. The September correction was led by growth stocks but, despite the recent lag, growth stocks in the US continue to dominate with strong performance for the year. International developed stocks (MSCI EAFE) were positive for the quarter as well as Emerging Market stocks. Year-to-date through September 30, Emerging Market stocks are slightly negative and International Developed (Europe, Japan, Australia) are down close to 10%.

An index that aggregates US, International Developed, and Emerging Market stocks is the MSCI All Country World Index (ACWI)–which is up 1.37% year-to-date.

The ACWI covers 85% of the world’s investable universe but excludes small capitalization companies. If small company stocks were represented in the ACWI, performance would be lower as small companies have trailed the rest of the world in terms of performance and are down 16% (see graphic below). 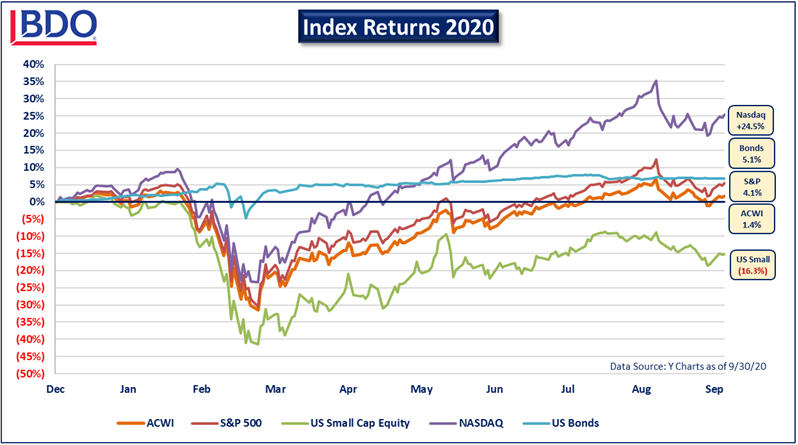 Lesson Learned from the Past

As mentioned in the recap, and in many of the ‘Market Perspectives’ over the past several months, there has been a very wide divergence in performance of growth style stocks versus value stocks, not only this year but over the past 3-4 years. The divergence in performance is similar to the late 1990’s when Internet focused stocks dramatically outperformed the broad stock market.  The eventual outcome was the infamous DotCom bubble (graphic below). 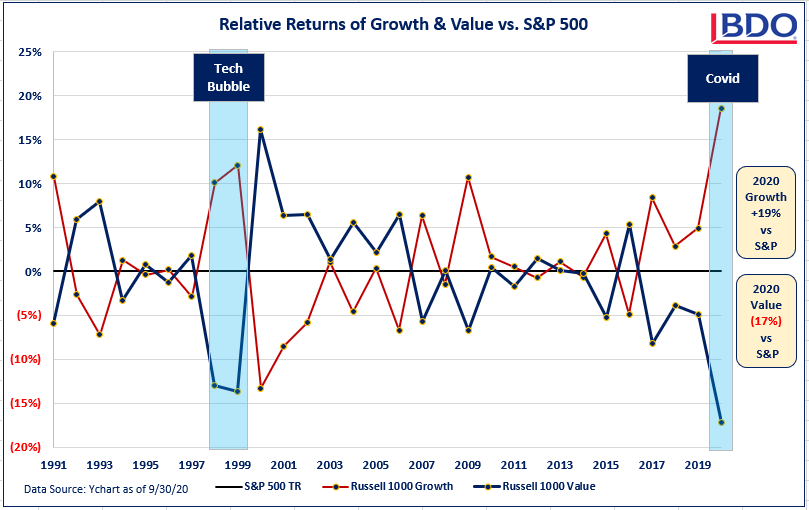 Acronyms like FANMAG (or FAANG, FAANGM), which represent the largest technology companies today (specifically Facebook, Amazon, Netflix, Microsoft, Apple and Google) have dominated conversations in the financial media and for good reason. If an investor left out exposure to these growth/tech companies, their portfolio returns suffered tremendously. This is yet another similarity to the late 90’s DotCom bubble.

Investor fervor has been insatiable for very large tech companies, so much so that these stocks now make up 25% of the S&P 500. When 25% of broad market returns are coming from 1% of the companies in the S&P 500, we consider the market to be ‘narrow’. A narrow market is often considered a risky one especially when the narrowness is concentrated in one sector (see excerpt below from David Kostin of Goldman Sachs). This is yet another similarity to the DotCom Era.


"From a macro perspective, record concentration means the S&P 500 has never been more dependent on the continued strength of its largest constituents or more vulnerable to an idiosyncratic shock to any of these stocks," David Kostin, chief US equity strategist at Goldman Sachs, said in a recent note.

The big difference between the two time periods is the catalyst that led to growth stock outperformance. Growth stock dominance in 2020 was a result of a stay-at-home, shutdown economy amidst the Covid-19 outbreak. The shutdown pulled forward several years of future revenue for many tech companies who benefited from a quarantine. High quality companies with strong earnings and balance sheets (unlike during the earlier time frame), and an innovative product or service (a quintessential growth stock) dominated as those companies whose earnings are more closely tied to the economy (value stocks) suffered due to the historically dramatic drop in GDP during the Pandemic.

Our job as investors is to manage risk and optimize risk-adjusted returns. Recently investors have been ignoring stretched valuations and continue to buy growth stocks. Truthfully, the party may not be over for these growth companies, especially as the threat of shutdowns still loom as a potential combination Covid-19/flu season approaches. However, the lesson to be learned is that the timing of when market extremes unwind is very difficult to predict. The old adage of ‘buy low, sell high’ suggests that the future will probably not look like the recent past. Below is a look at what happened in the late 90’s and the 2000’s. Technology stocks seemed to have unlimited potential because the internet was coming of age. Investors were buying tech stocks based on hope and not on sound fundamental principles. This fervor in tech stocks in the late 90’s fueled the bubble that eventually burst and resulted in value stocks outperforming growth for 7 years. 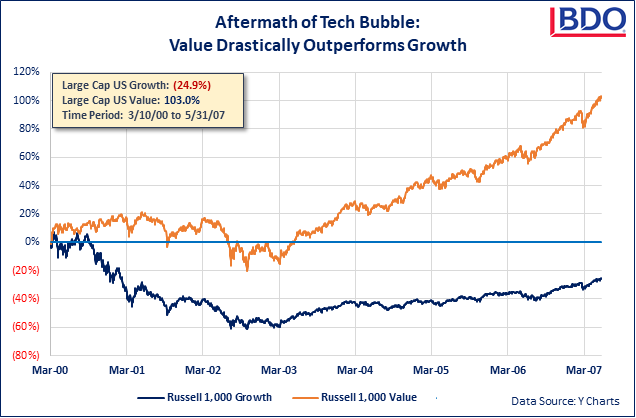 For ‘value’ style investments to outperform growth investments over the intermediate to long-term, a sustainable economic recovery will likely be essential, which would require further resolution to the pandemic (i.e., a reversal of conditions that led to growth outperformance). Therefore, understanding the potential path for the economy is a key component to portfolio positioning.


An Update to a Few Key Economic Indicators

The US economy is mostly consumption driven and understanding the economic position of the consumer, their spending habits, and the response of manufacturers to meet consumer spending will aid in deciphering the future path of the economy. Below we present some of the key data points worth monitoring as we ascertain the state of the recovery. This list is not exhaustive, but simply represents a sample of several noteworthy economic indicators.

After a trend of declining jobless claims (a weekly figure that counts the number of new people filing for unemployment) since a major spike in late March, the claims figures have leveled off and have been stagnant at just shy of 900,000 claims per week over the past couple months. Even today’s numbers, while much lower than March, are still above the previous high from 1982. 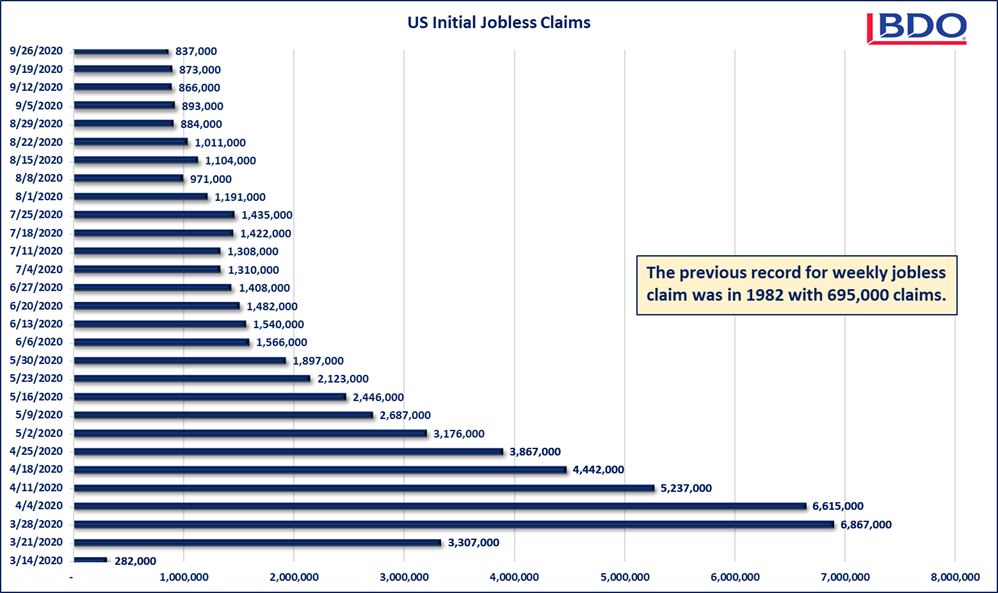 Many people are still reeling from job loss and/or underemployment (working part-time when they would prefer to work full-time). The extra weekly unemployment benefit was certainly a boost to many Americans, and quite often the benefit was more than many workers were making while fully employed pre-Covid-19. Unfortunately, many temporary layoffs have turned into permanent layoffs recently, which is very concerning. While the numbers have not yet reached levels seen in the financial crisis, the past two months of permanent layoff growth was the highest since 2009.

Durable goods are defined as those goods that typically last 3 years or more, and, compared to non-durable goods, are more expensive. Durable goods are often described as automobiles, appliances, furniture, tools and equipment, electronics, jewelry, etc. Orders for durable goods are considered a leading economic indicator and really give a good gauge on consumer behavior. Because our economy is mostly driven by consumption, this is a very important indicator.

After the contraction from the economic shutdown in March and April, durable goods orders increased significantly three months in a row as spending for services dropped. However, August, was a month that fell below already lowered expectations (graphic below). This is a key indicator to watch to gauge future economic activity. Often, when durable goods orders are positive, manufacturers respond by producing more durable goods to replenish declining inventories.

One of our favorite leading economic indicators is the ISM Manufacturing Index (also known as PMI). The PMI is based on a survey of manufacturers and we have often featured this indicator in past commentaries. We like this data because it can be a forward-looking indicator for future economic growth and the results are based on a survey of purchasers in the manufacturing sector. If new orders are increasing (as we saw with Durable Goods in the section to the left), manufacturers become more optimistic about the future of their business. If the aggregate of all companies surveyed (which is more than 300 large global manufacturers) in a country are optimistic about future business prospects, the reading is greater than 50 representing expansion in the manufacturing sector (see graphic below). Of the 37 countries shown, 28 are showing a reading greater than 50 as of 9/30/2020.

Emerging Market economies have led the rest of the world according to the PMI. The Eurozone is also showing better-than-expected expansion in the manufacturing sector, led by Germany. This is a positive signal as Germany is a very large export-driven economy. The US is also in expansion territory. 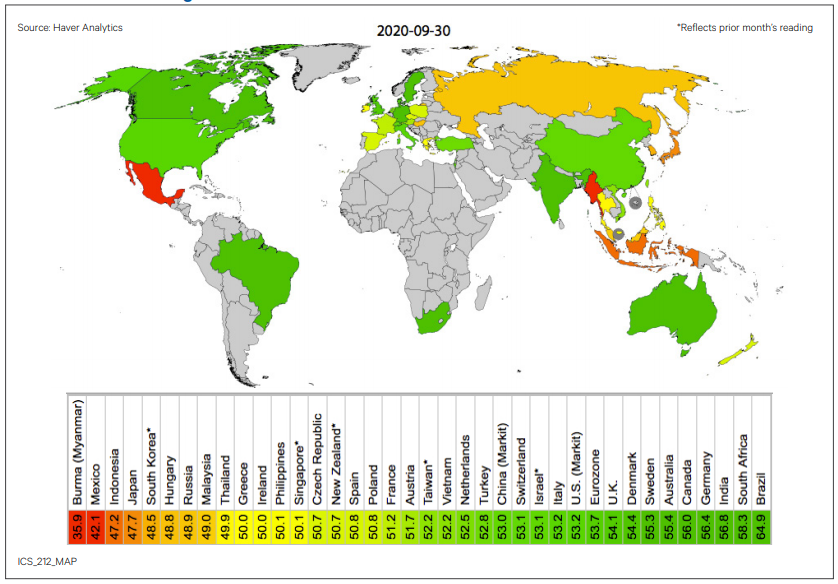 The glue that is holding the unprecedented recovery in stocks together and providing fuel to consumers and manufacturers alike is stimulus. The good news in manufacturing does not reconcile with the unemployment numbers and weekly jobless claims. The most powerful rationale for the recovery in financial markets is the broad, sweeping and enormous fiscal and monetary stimulus. As depicted in the graph below, the support has been the scaffolding to keep businesses, consumers and economies around the world up and running until a full recovery can take hold. 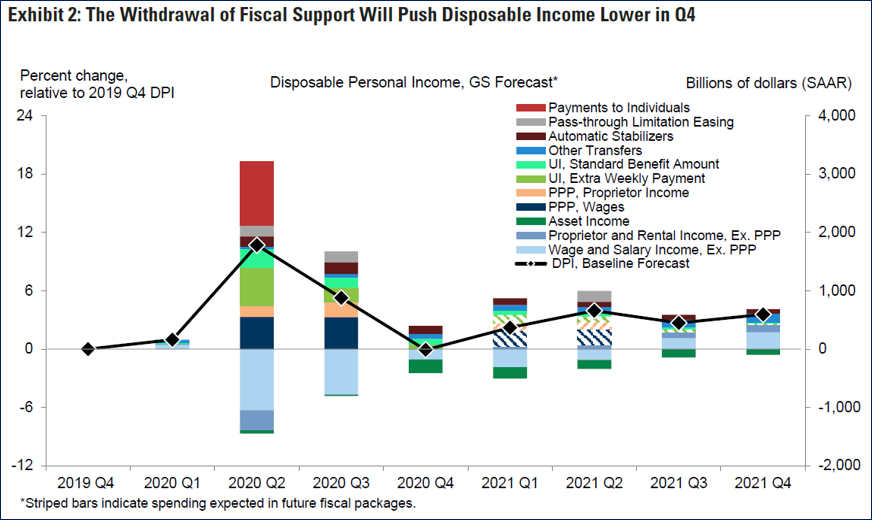 In sum, unemployment continues to remain very high and a resurgence in Covid- 19 cases combined with the upcoming flu season could create even more concern from investors in the near term. Recent economic data, such as durable goods, has been soft and below expectations after several months of strong readings. ISM manufacturing readings continue to remain strong on durable goods orders but are very weak on ISM surveys for companies that provide services. However, we remain optimistic for future economic growth even with the recent soft data. Our near-term optimism is predicated on the belief that additional stimulus will continue to bridge the gap. Time is needed to allow economic activity to return to a self-sustaining cycle. All of this is challenging during a hotly contested and highly polarizing election cycle.

After experiencing an orderly correction in stock prices for most of September, markets recovered modestly as we approached the end of the 3rd quarter on the hopes of stimulus talks. This helped boost stock prices towards the end of the month. Each day we are learning more about the virus and, more importantly, how to combat it. This, combined with additional stimulus from the Federal Reserve and Treasury, can maintain the economic recovery. Obviously, there will be a price to pay down the road which will likely include higher inflation and taxes, but for now, as the Fed remains ultra-accommodative, we believe being too defensive in stock positioning would be a mistake.

Currently, many growth stocks have either stretched or very stretched valuations. If Covid- 19 cases increase and governments go back to more restrictive social distancing policies, the rationale for growth stock outperformance may persist. Valuations remain stretched for many of these which will likely limit the upside. Once a recovery takes hold, this will reverse course and economic growth may spur outperformance of value stocks relative to growth. We do not believe we are in a growth bubble per se; however, we do expect that when things reverse, value stocks may finally experience long overdue outperformance.

Bonds have once again become a very frustrating asset class as the Federal Reserve has purposefully set interest rate policy at 0-0.25% to push investors into riskier asset classes like stocks and real estate. As a result, cash equivalents and safe bonds are once again at historically low yields. After factoring in inflation, the ‘real’ return received on cash and the highest-rated debt is negative. Broadly, we believe using a high quality, short-term bond portfolio will serve as a prudent ballast for equity volatility.
Article October 19, 2020
Printprint

After three consecutive quarters of declines in stocks and bonds, the fourth quarter of 2022 saw a reversal as most asset classes advanced.

In this article, we explore how a thoughtfully designed investment policy statement (IPS) serves as the foundation for an E&F’s investment program.

Concerns about economic growth are topping the headlines in early 2023 as the U.S. Federal Reserve continues to raise interest rates, the housing market slows, business financing dries up, and the stock market remains volatile.